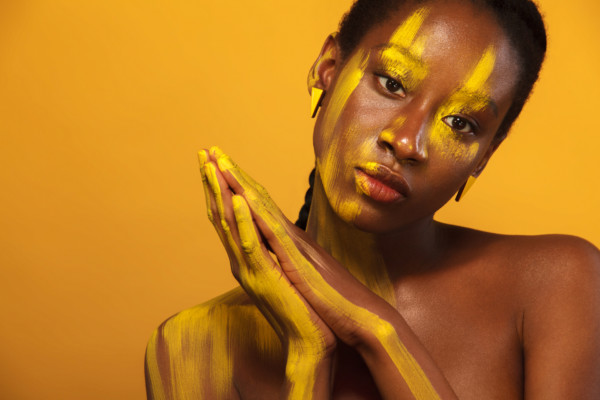 Six years was a long time to bleed for, but by the second year I had adapted very well. My father called it “Nka.” He said his mother suffered the same.

I started early to flow blood like the other girls, four days straight, once every month. My father’s wife had shown me to position the rags properly, so they could absorb the blood.

I was excited to break the news to my friends. They had all began to flow blood too; we were full women now. We could attend the moonlight dances and even participate in the Jimo parade of brides.

It happened every month. The Gringa beads glittering around their waist and leather sandals on their feet, the full women of our land matched through the market, bare chested. Being led by the drums, they danced to announce their availability for marriage.

Men from our clan and neighboring clans stood as spectators. Each, taking note of which woman would suit his preferences.

Married women and children had no business around the market that day. They were made to pay a fine if caught. Anyone who couldn’t pay the fine was flogged mercilessly by the Jimo masquerade.

I took part in the parade six times. By the seventh month, the blood would not stop flowing. Bleeding women were not allowed in the parade.

Four days passed and I bled on. My half brother, Kofo, was the first to notice.

“Have you contacted the blood disease?” He taunted me when he saw me spreading my rags on the bamboo fence behind my hut. “Second time this month!” He laughed. It had been two weeks, but I saw no need to worry. The old woman at the square had taught us about the irregularities that happened in the first year.

When a month passed and I still poured blood, I ran to my father’s hut with tears in my eyes.

He had just returned from the farm and was eating dinner in his hut. He spilled his soup rushing out of the hut to see what had happened to his beloved daughter.

“Who touched you?” he asked, putting his arms around me. “Tell your father!” He shook me.

His face fell from disappointment when I told him it was only the blood; his heart was prepared for war. “I couldn’t save your mother’s life,” he told me every chance he got, “but I’d be damned if I let any harm come to you.”

His eyes lit whenever he spoke about her. On such days, I felt responsible for her death. She died giving life to me.

“I want her exempted from chores,” my father told his wife in the family meeting the next day. “She’s bearing enough burden already.”

She wanted to protest. She had borne no female children yet. And it was no news that boys were no good at house chores

“Shh!” my father cut her short. “Whatever you cannot teach your sons to do, let it be left for the beasts of the forest.” He lifted himself from his seat and announced that the meeting was over.

My father waited another month before he invited Akute, the witch doctor, to see me. “It could be a false alarm.”

She came with her bag of leaves, her face smeared with sticky black mud. Wearing a grim expression, she entered my hut behind my father. “I will leave you to do your work.” With his eyes he asked me to obey her. Then he left the hut, whistling as he went.

“Spread your legs!” She spoke as if to a person half deaf, I disliked her immediately.

She searched for whatever it was she was looking for, now and then casting awkward glances at me. When she was done, she wiped her fingers on my wrapper and stood with a smirk on her face.

“Boil this and drink it every morning.” She handed me some leaves and walked out toward my father’s hut.

“You shall not bleed to death,” my father started to speak that night as we sat in the yard. He had sat for almost an hour observing the sky, like he was fondling a thought.

He rubbed my shoulder and went on, “Your grandmother was forced to marry a man when she was only thirteen years old, because of the Nka. Her parents could not stand the blood. True to the predictions of the witch doctors, the blood stopped flowing.” He paused taking a deep breath.

“The blood stopped, but urine flowed without ceasing.” He gasped “My little girl? Never! You will be fed well in your father’s house, I will make sure of that. Until you are ripe for marriage, you will bleed here, under my roof!” He beat his chest to emphasize his point.

It took six years for me to be ripe. In the fourth year, my father almost killed his wife for suggesting that he give my hand in marriage to Adi, the son of Mababa. “May a wild beast devour you!” He cursed her as she ran. He had succeeded in giving her some hot slaps before her sons rescued her.

Dumi, my husband, raced into the bath-hut with a machete in his hand when he heard me scream. He thought I had seen a snake. We had been married for a month and the blood still flowed.

“I bleed no more! The rags are dry!” I announced, pouring tears of joy.

“The gods be praised!” He was happy too, but not half as happy as I.

Your Strong Pull Out Game Won’t Save You From STDs

Uloma is a Writer with interest in Public Relations and Human Resource Development. She gains pleasure in Music and Art. She chooses not to take credit for her work, she believes that inspiration is Divine. She also believes that Creativity will save this world. She runs a personal blog, myrapestoryphotography.wordpress.com.