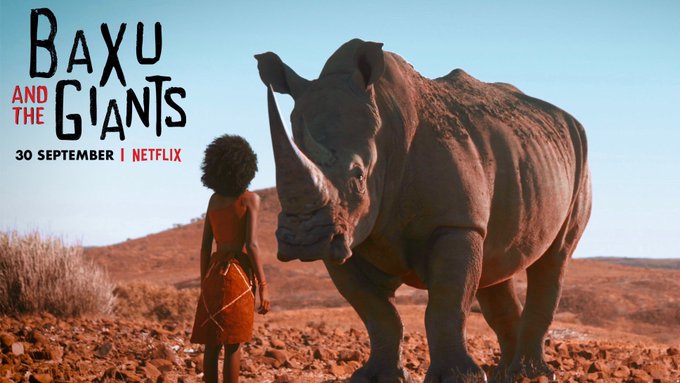 Multiple award-winning Namibian film, “Baxu and the Giants“, depicting the importance of saving Namibian rhinos is coming to Netflix on September 30.

The film follows the life of Baxu, a 9-year-old girl who lives a peaceful life with her older brother Khata and an alcoholic grandmother in rural Namibia until strange men show up and cause a change in the village. First, the neighbour starts acting suspicious, then Baxu notices changes in her own household. Keen on finding out what Khata is hiding from her, Baxu investigates and learns that her brother started poaching, in order to improve his family’s living conditions. Baxu has to make a tough decision – will she stay quiet or will she listen to the rhinos, the giants of the Savannah, who she talks to in her dreams and risk losing the people she loves the most?

This movie was commissioned by the Legal Assistance Centre, produced by Andrew Botelle (’The Power Stone’, ‘Born in Etosha’) from Mamokobo video and research, directed and co-written by Florian Schott (‘Katutura’), and co-written and co-produced by Girley Jazama (’The White Line’).

The film has been screened at over 20 film festivals and in 10 countries around the world before landing its Netflix deal with the support of a South African sales agent at the RapidLion Film Festival, where the film was nominated for best humanitarian film.

Trust us, you don’t want to miss this feature film on Netflix