Lee Ada'Eze: The Unsung Heroes of Our Time 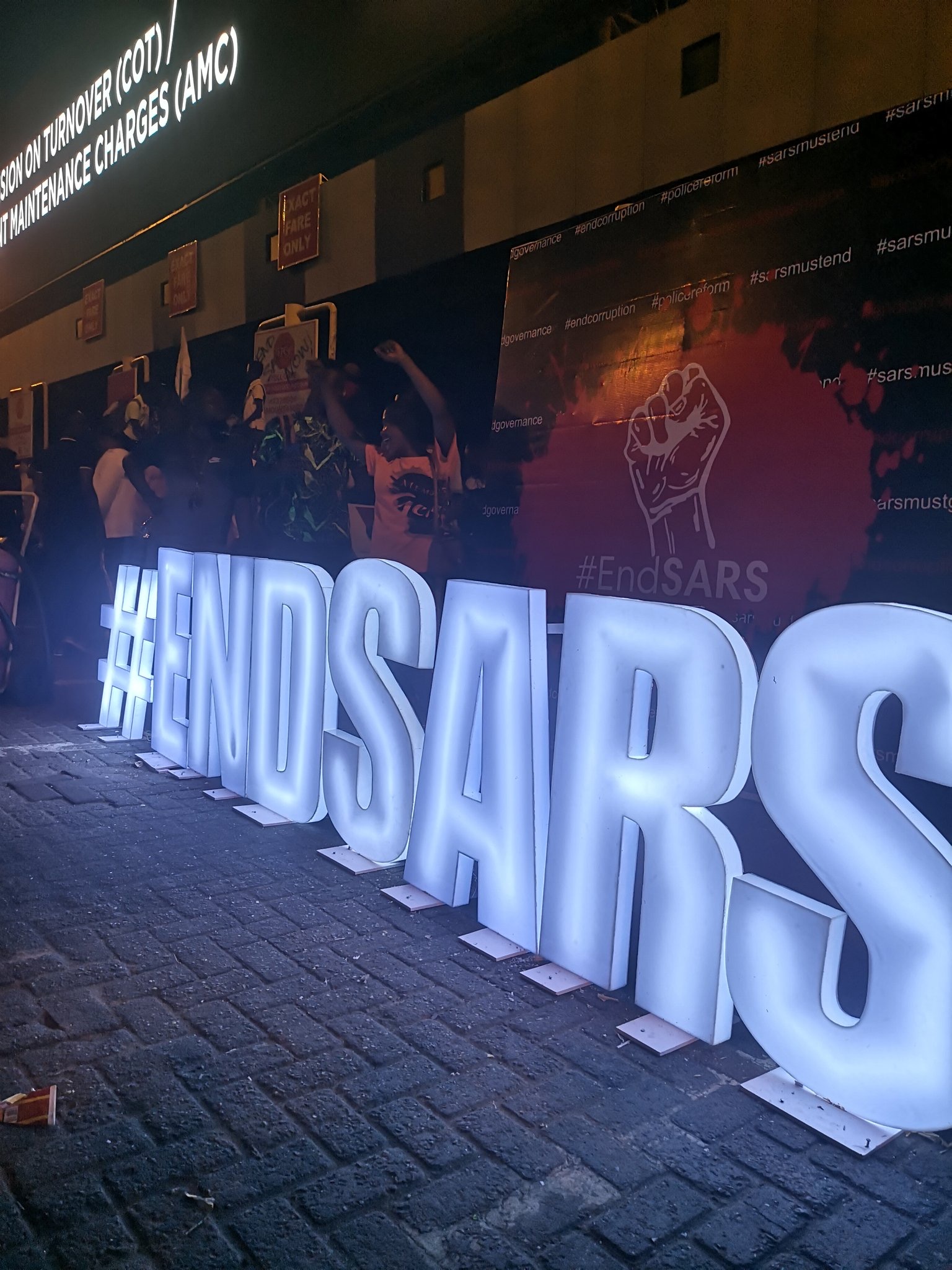 Arise, O compatriots, Nigeria’s call obey
To serve our fatherland, with love and strength and faith
The labour of our heroes past shall never be in vain
To serve with heart and might
One nation bound in freedom, PEACE AND UNITY.

With the Nigerian flag in their hands and the national anthem in their mouths, our innocent youths were massacred. A nation that does not respect its own flag and anthem—it’s glaring why no other nation does. 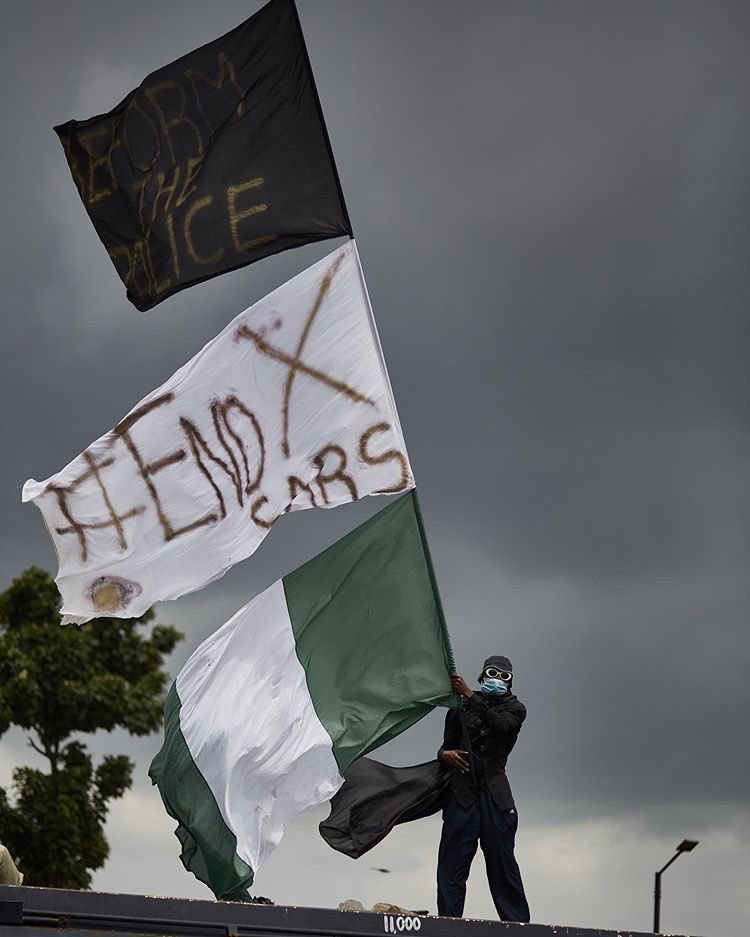 The peaceful protests across Nigeria were one for 2 weeks.

In those 2 weeks, the protests were completely peaceful.

In those 2 weeks, the youths took care of themselves better than the Nigerian government has done in the entire 60 years of her Independence—well, at least, in the 23 years of my existence.

In those 2 weeks, two candlelight services were held in honour of innocent youths who were murdered by the Nigerian police for simply being Nigerian youths.

In those 2 weeks, several efforts were made to mar the peaceful protest. It is tempting to say that random hoodlums hijacked the peaceful protests for no reason other than the fact that they want the Special Anti-Robbery Squad to remain in existence, but what sense would that make?

Firstly, the police attacked and killed unarmed youths who were peacefully protesting with nothing but placards, their voices and one another. The youths did not fight back.

Thugs were sent into the streets to attack the youths while the police stood by and watched. I’m trying to understand certain things; peaceful protesters were attacked by the police for peacefully asking them to stop the killings, and then thugs attacked several places including Alausa, in BRT buses with cutlasses, stones and all sorts of weapons, and the police suddenly had the self control to stand down? Still, the peaceful protesters remained peaceful, never carrying weapons to these protests. Except food and drinks have now become weapons, I do not understand what these protesters did wrong.

In those 2 weeks, prisoners miraculously escaped from prisons and went into the streets to attack vehicles and innocent people. Again, I can’t understand certain things:

I have more questions:

Another set of thugs were released into the streets. This time, they didn’t come to attack the protesters alone; they burnt down police stations. And, somehow, there isn’t one person who was in the building to narrate the incident. Now we all know Nigeria, so we would know when there’s a real fire situation. We would have casualties, or at least people who escaped. All we have are distant videos of two or more police stations burning. Was the police station empty?

The narrative that these thugs were a part of the peaceful protests failed to fly because, clearly, they were not. None of them had at least one placard or a sign that read #EndSARS, or any of the trends that have emerged from these peaceful protests. But still, peaceful protesters were accused of causing these issues. That seemed like a perfect excuse to bring in the military, a plan that was already rumored to be in the pipeline.

In all of these happenings, everyday, peaceful protesters died, but not one thug was killed by the police. Not one escaped prisoner was arrested and nobody sent the Nigerian army after them.

Then a 24-hour curfew was declared in Lagos state on Tuesday. This news conveniently came in 4 hours before the curfew was supposed to begin, in this same Lagos that is married to traffic? On a Tuesday? Yes, the curfew was later moved from 4:00pm to 9:00pm, but this didn’t matter as what was going to be done was already inevitable.

On Tuesday, at Lekki Toll Gate Plaza, the Nigerian flag was stained with the blood of innocent youths who only begged for a chance to live, by the government that swore to protect them.

The unarmed peaceful protesters were still at Lekki Toll Gate when workers went to dismantle the CCTV cameras in Lekki. Why? Who gave the orders? Something was clearly going on. They were still at the Toll Gate when suddenly, the lights went out 2 hours before the curfew was set to begin. This was when the situation got out of hand.

Suddenly, our youths were surrounded by the Nigerian military, or ‘security operatives’ as the local media chose to call them. The Nigerian army that swore to protect us opened fire on unarmed citizens on Tuesday.

More lives taken; more parents lost their children and more children lost their parents. There was no local TV station present to cover the event. Let’s not forget, they were in total darkness! Except for phone torches and Instagram Live, we wouldn’t have known what was going on.

On Tuesday, the Nigeran government declared war on its citizens, simply because they asked that the police stop brutalizing and killing them.

Welcome to Nigeria, where asking for freedom gets you more oppression. Where one man orders the killing of countless citizens for his selfish interests and to enrich his already rich pocket. Where freedom of speech comes with terms and conditions, and asking for basic human rights is an atrocity.

Welcome to Nigeria, where Boko Haram stays undefeated by the same army that did not hesitate to waste unarmed youths.

The saddest part is that the governor of Lagos State came out to claim that reports of people being dead on social media were false. The audacity! I mean, this could have worked before the social media era, but not while we had youths who captured the tragic incident on their Instagram Live sessions. We saw lifeless bodies before they were mysteriously removed from Lekki Toll Gate, and they still lied to our faces that no fatality was recorded? Even as at Wednesday, more people were still getting shot at Yaba, Ebute Metta and other places. Even with all the evidence, they say the Nigerian army had nothing to do with it?

I can’t understand how the Nigerian police and army that claim to not have bullets when robberies are going on in the country suddenly have live ammunitions and tanks to attack unarmed peaceful protesters who only decided to sit and chant the National anthem before they were killed.

Like the shooting wasn’t enough, they stopped ambulances from rescuing the victims.

Nigerian youths are deeply hurt and in all of this, the president is nowhere to be found.

To every hero that fell at the Lekki Toll Gate massacre, may your souls rest in peace.

To every family that has lost a member and is grieving, may the Lord comfort you.

To every person fighting to survive this terrible incident, I pray God strengthens you… we are here with you.

To everyone who risked their lives to protect helpless youths: DJ Switch, Doctor Ayo and all the medical practitioners, the hospitals offering free treatments and the citizens covering the bills for the victims, history will never forget you

They may have hit us hard, but we shook them and we did that with zero violence. Absolute peace.

We have to stay strong for each other and for all our fallen heroes. We may feel broken right now, but we are definitely not destroyed.

We live to fight another day.

Lee Ada'Eze is a content writer at BellaNaija. A seamless raconteur who tells stories through different media from content, ghost and screenwriting to acting and creative directing. She is also skilled in email marketing. When she's not working, she's probably in her head, listening to good music, watching a movie or having a fulfilling time out. Lee is very passionate about self-awareness and helping everyone around her know their self-worth. Unpredictable and reserved; a beautiful blend of multiple personalities. You can reach Lee directly on: Instagram/Twitter - @leeadaeze & [email protected]