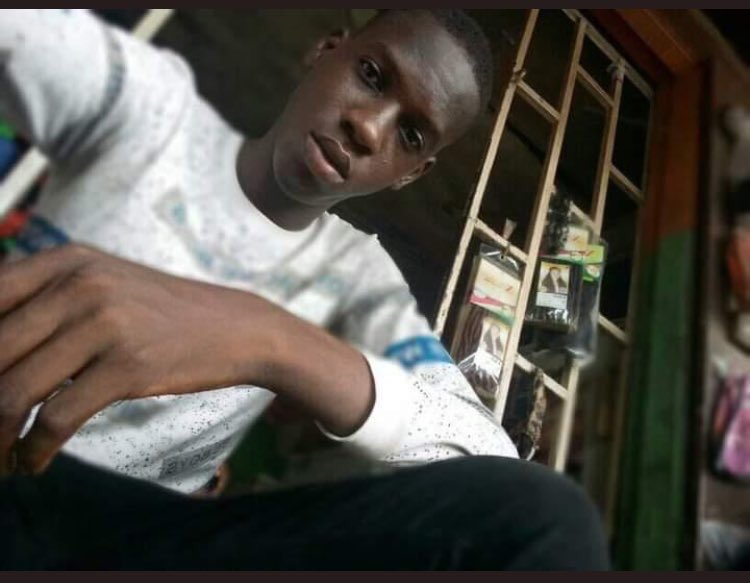 In light of the #EndSARS and #EndPoliceBrutality protests, nothing is more disheartening than having more cases of youths being detained by law enforcement officials only to later wind-up dead.

Recently, a Pelumi Onifade was shot dead “in the custody of the Lagos State Task Force led by Yinka Egbeyemi“, according to SaharaReporters.

The 20-year-old who worked with Gboa TV was reportedly arrested on October 24 by policemen at Abattoir, Oko Oba area of Agege, while on official duty. A member of Pelumi’s family told SaharaReporters that they had searched for him unavailing, until they heard the sad news of Pelumi’s demise from a senior police officer.

Pelumi went to record the incident of looting at the abattoir as a staff of Gboa TV on Saturday 24/10/2020 only to be arrested by men of the Lagos Task Force and after searching for him aggressively for seven days, we were told that he had been shot dead and his body deposited at the morgue.

We are begging them now to release his corpse and explain to us how he died. Why was he arrested at Agege, only for us to be told that his corpse is at Ikorodu General Hospital morgue. They just wasted the boy for no reason.

More details was shared by a twitter reporter who wrote that,

On 24th of October 2020, there was a crowd in a compound at Oko-oba, Agege. Onifade Pelumi and his colleague were sent as media personnels to know what exactly was going on in that area. While in an interview with the residents, they said ”we are hungry, we want this soldiers to leave so we can carry our food, this food is for Covid-19”. Apparently, they believed the Covid-19 was stored in a warehouse close to the compound.

During the interview Taskforce Officers came with cutlasses, throwing bottles and shooting live bullets as they attack the crowd. Out of fear, the crowd including Onifade Pelumi ran for their lives. In a short while, his colleague saw that Pelumi Onifade had already been injured and was being carried by 4 Taskforce Officers into their Van(Black Maria), his colleague tried to defend him showing his ID Card and making them understand that he was putting on a GBOAH TV jacket, they threatened him with a cutlass and cocked their Gun at him.

A thorough search was conducted from Police Stations to Prisons all over Lagos State for 4days (Saturday 24th to Tuesday 27th) after which a ‘Missing Person’ Graphics was shared across all social media platforms to aid the search of Onifade Pelumi which went viral.

That same evening of Tuesday 27th of October, the head of Taskforce Lagos State called, saying he saw the post, and they agreed to meet on wednesday 28th of October at the State Headquarters, Ikeja, After the meeting with task force, the officer that led the squad said that they arrested 5 people at the Ministry of Agriculture Abattoir, Oko-Oba, Agege, but 1 person died and they have dumped his corpse at Ikorodu Mortuary. They scheduled a meeting for Thursday to confirm if his name was in the list of those arrested, If not they will go to the mortuary at Ikorodu to confirm. Due to the public holiday on Thursday the appointment was rescheduled for Friday. On Friday Morning they got to Ikorodu and behold it was Pelumi Onifade’s Corpse.

WE ARE NOT AGAINST THE POLICE, POLICE REFORM IS A FIGHT IN THE COUNTRY. AT AGE 20, HE WAS THE BREAD WINNER OF HIS FAMILY THAT CONSIST OF HIS FATHER, MOTHER AND 2 JUNIOR SISTERS, RESPONSIBLE IN HIS CHURCH AND ALSO A MEMBER OF THE BOYS BRIGADE. THE YOUTH IN THE COMMUNITY ARE ASKING FOR THESE 4 POINTS AGENDA

Pelumi was my kid bro. He was so harmless. The Police shattered his dreams of graduating with a first class. They throw the family into sorrow. Now they’re refusing to even release his corpse.
How heartless can these people go 😭💔 #JusticeforPelumi pic.twitter.com/qR9N2bBHbC

Pelumi Onifade was 20 years old!!! We have lost another promising Nigerian Youth full of potentials due to recklessness and lack of value for human lives.
Nobody has been held accountable till this very moment.
How safe are we in Nigeria?? #JusticeforPelumi

Who is getting recalled in Abule Egba? #JusticeforPelumi

A politician shot at people in Abule Egba, Pelumi Onifade covered the incident. Two weeks on, the politician walks freely, but Pelumi was arrested & is now dead? Who ordered his arrest? Who took his body to the morgue? Who will be held accountable for this??? #JusticeforPelumi

Pelumi Onifade as not wrongly taken! More reasons why we won't keep quiet!

A colleague of his went to identify to the killers that he was a media person, but got threatened.

Even with a glaring prove of his media Jacket. The killed him.

Pelumi Onifade was murdered by the Lagos state task & police force ! Abiodun Bolarinwa, a Lagos politician who was caught on camera by Pelumi, shot at & killed people at Abule Egba, is still roaming free. Pelumi MUST get justice & Abiodun MUST be brought to book #JusticeforPelumi

Who arrested pelumi ?
Who murdered pelumi?
Who deposited pelumi corpse at ikorodu mortuary?@PoliceNG we need answers to all this question. Pelumi is an innocent journalist covering the endsars protest but was unlawfully arrested and killed by @PoliceNG #justiceforpelumi pic.twitter.com/EAz1fmK7s8

20 Year-Old Journalist of Gboah TV, Pelumi Onifade Reportedly Killed By task force and they withheld the news of his demise from his Family Members until his dead body was found at ikorodu mortuary.
RIP Pelumi 💔#JusticeforPelumi pic.twitter.com/w10BRSuHeD

You took him alive and denied having him till he died IN YOUR CUSTODY because he made a fucking video. You snuffed out the light of some people’s world just because of a video?
Eleda e o gbodo sun o, tomo tomo, tebi tara logbodo ba gbo gbo idile yin sofo. #JusticeforPelumi

Naira marley asked the PRO on IG live if recording a police officer on rogue is permitted & he said "yes, if you can do it safely"

This is the guy who filmed the politician shooting at Abule Egba, he has been killed by the Police while the man who opened fire at peaceful protesters and shot 3 is still a free man till today. #EndSARS #JusticeforPelumi https://t.co/BR0WoR5kz7

Pelumi Onifade was the journalist that recorded this particular video, and today report's has it that he was killed by men of the Lagos State tasks Force. #JusticeforPelumi https://t.co/ZbzLBFrjbH

before they killed the guy, they said "na una dey put us for TV abi". no freedom of the press. #JusticeforPelumi #EndSARS

The BN Style Recap: 20+ Style & Beauty Stories You Need To Get Into This Week