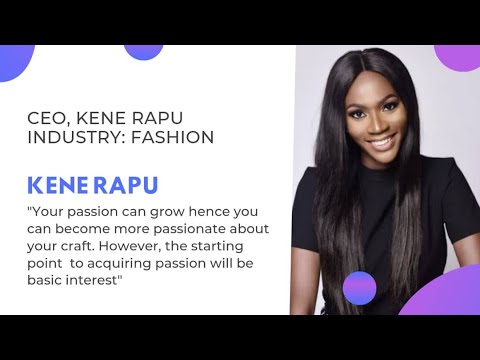 In this episode of “Under 40 CEOs“, Familusi Akin Babajide (FAB) talks with Kene Rapu, founder and CEO of Kene Rapu on becoming more passionate about her craft.

Kene Rapu is a qualified lawyer with an LLB law degree from the University of Bristol, United Kingdom and a Masters Degree in Fashion Entrepreneurship from the London College of Fashion, United Kingdom.

Kene’s company is a Nigerian footwear brand championing local production, established in 2011 and has played a significant role in changing the face of ‘Made in Nigeria’ footwear.

In 2016 she was selected by the Tony Elumelu Foundation as one of 1000 African Entrepreneurs who’s idea could “change Africa”, in 2017 as one of 100 ‘Most Influential’ women in Nigeria by Leading Ladies Africa and most recently listed in the prestigious Forbes Africa “30 Under 30” class of 2018, in the business category.