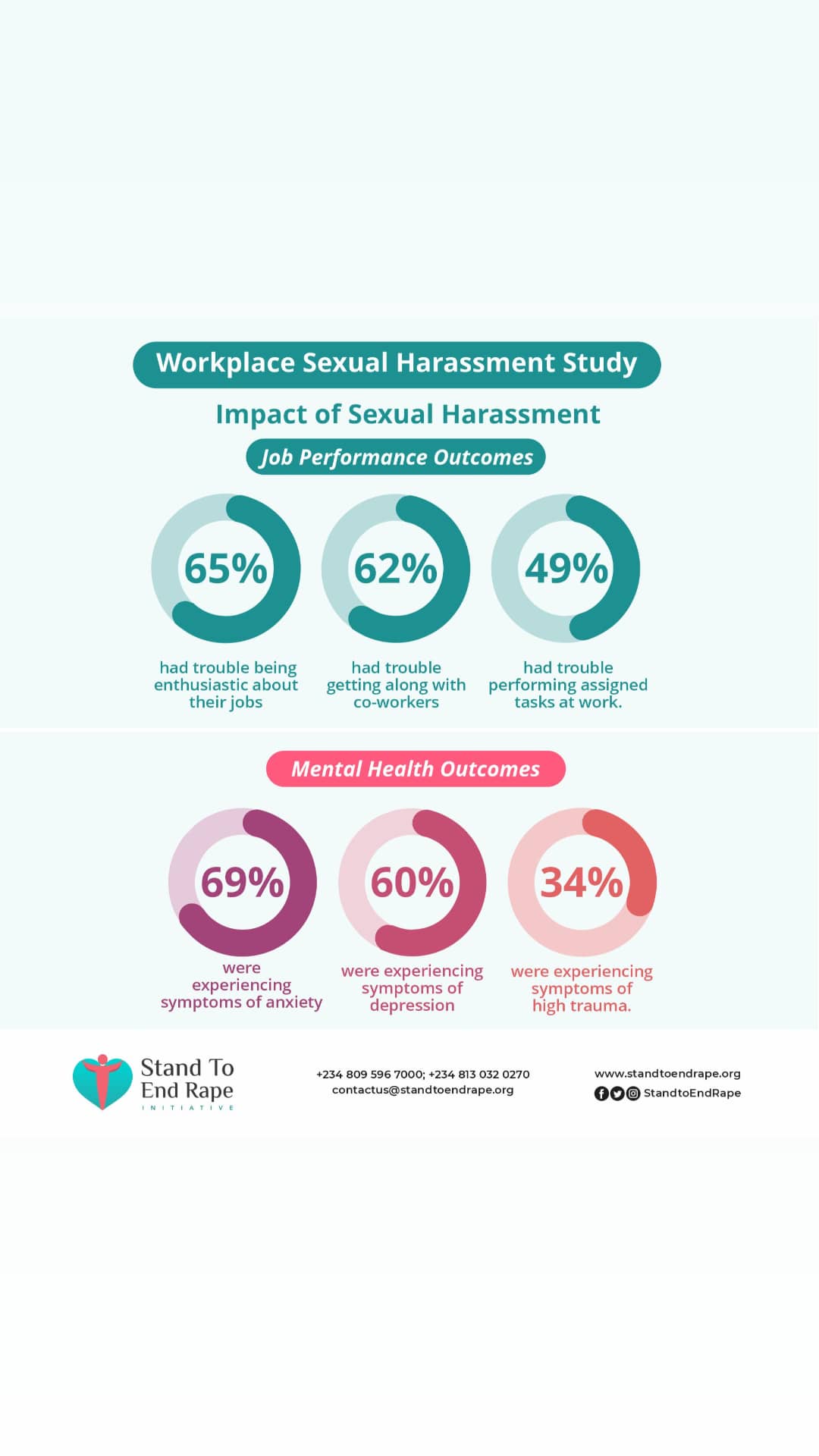 The #MeToo movement, which initially started in 2006 and gained more ground in 2017, has given more people the courage and support to speak up against sexual violence, especially workplace harassment. Everyone deserves to live and work in an environment free of all forms of abuse. In Nigeria, the #StandtoEndRape seeks an equitable, just and sexual violence-free society for all persons.

Previous studies on workplace sexual harassment showed a prevalence rate of 63.5% in the legal sector and 73.7% in various employment sectors in Lagos State. The persistence of workplace sexual harassment has threatened women’s job security, earning power and creates fear to report cases.*** The consequences of not succumbing to these advances are mind-wrecking given the high unemployment rate in Nigeria – this invariably leads to the workforce’s decline.***

Stand to End Rape Initiative (STER) conducted a study (2020) on sexual harassment in the workplace, giving more insight into Nigeria’s workplace climate. Beyond aiming to obtain information on workplace sexual harassment across various sectors in Nigeria, the survey examined the prevalence of workplace sexual harassment, identify factors that may contribute to its occurrence, its impact, and the strategies to prevent it. The study, which adopted a quantitative data collection method, was conducted between September and October 2020. The target population included participants from all 36 states, including the Federal Capital Territory of Nigeria. All participants were above the age of 18, and maintained employment within the last 12 months. A total of four hundred ninety-three (493) people (both male and female) responded to the survey.

We also needed to know how many of these workers have experienced sexual harassment in the workplace. The study showed that 64% of the respondents had incidents of sexual harassment at work at one point, with women experiencing higher rates of harassment compared to men.

To expand on the understanding of sexual harassment, we asked what forms of sexual harassment exist in the workplace. Respondents in this study confirm that different types of harassment take place in the workplace. The various forms of sexual harassment include being looked at in a sexual way (45%), receiving unwanted sexual comments/remarks about their clothing/accessories (44%), having conversations with uncomfortable sexual jokes/stories told (43%), receiving sexual statements/comments about their bodies (35%), told crude/gross sexual things and asked to talk about sexual matters when they didn’t want to (33%), receiving nonstop invitations to go out, get dinner, have drinks or have sex even after declining (27%).

For years, people have assumed that abuse can only occur in private places, so to shed more light on this, we asked where the harassments occur, 77% of participants stated that the abuse happened in the office/primary place of work.

Stand To End Rape Initiative (STER) was particularly interested in the provisions and measures put in place by employers to restrict and punish sexual predators. This led us to ask if there are any office policies in place on sexual harassment that they knew of. Only 38% of respondents attested to the existing sexual harassment policies at their workplace, while 83% of employees knew how to initiate the procedure of filing a complaint. However, 44% of employees signified that they would not report a case of sexual harassment due to fear, victimisation, and other factors. 59% of employees who flagged their harassment through the reporting channels confirmed that their employers mitigated no punishment to the offender.

Abuse is unpredictable, and so is the reaction to it. For instance, the women leaders of the #MeToo movement were criticised for not speaking up early. To understand individual actions, we asked respondents how they responded to the workplace sexual harassment incident? 26% responded by asking the perpetrator to stop, 20% tried to pretend it never happened, 14% took no action, and 10% told a colleague. Only 9% reported the assault through formal channels.

Every victim of abuse needs support to deal with the effects of the experience, so we asked if sexually-harassed employees got support from employers, and our study showed that 81% of employees who reported the incident formally at work did not get any help from their employer.

This research critically shows that employers and the government need to develop and enforce mechanisms that ensure employees are safe from all forms of abuse in the workplace. At STER, we remain committed to sensitising society on the importance of eliminating all forms of sexual abuse through our vast resources, prevention mechanisms and training. For further enquiries, you can reach us on +2348095967000 or [email protected]