#WithChude: Darey Shares What He's Learned in His Two Decades as a Nigerian A-List Star 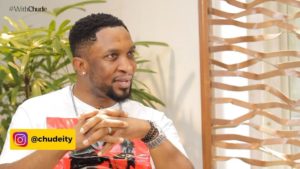 In the latest episode of “#WithChude,” Chude Jideonwo sits with Dare Art Alade, popularly known as Darey, as they discuss life, music, family, and love.

The Afro-R&B singer and songwriter also got to share the most important lesson he learnt in his two decades as an A-list star in Nigeria.

On losing his mum and his relationship with his dad

Her passing was tough. To think that one of her last public outings was at my debut album launch. You know, which kind of gave birth to this culture of artists doing album events, real ease parties and things like that where the industry would come together, your people, friends and collaborators that you’ve had on your project would perform and everyone would party. I mean we kicked that off back then and she was battling health issues then. In and out of treatment, so that was why her passing was a huge blow.

Also because we were of course closer than I was with my dad. Not saying I wasn’t close to both of them but of course in comparison, because I spent more time with her.  This is someone who if I had auditions or o come tell her that “mummy they are looking for so so talent somewhere I heard this and that my choir master told me one thing, she’ll now say  I think you should go try and sing this particular song. That’s how close we were and then she’ll give me transportation money and all the logistics of it and when I come back, how did it go, did it go well didn’t it go well… always a shoulder to cry on you know that kind of relationship learning and having that support was also really key for me. Losing her was huge but I think I lost her when I had luckily entered a higher sense of responsibility and maturity so it wasn’t too bad.

On love and marriage

Yes, marriage didn’t fit the profile for me according to you people. All you forensic analysts. They’ve even married the wife for you already just that it’s not time to bring the wife to you yet.

There are some decisions you take in life that can be foolish and there are some that are not. What’s the difference really is the audacity that you put behind them. You know, you can take a decision if you are sure and you are convinced and your conviction is strong about it, you can turn that foolish idea into the greatest reality. It always seems foolish but if you don’t do something about it, it’s not going to materialize. You’ll just die with that idea.

I’m not talking about marriage being a foolish institution oh, I did not say that. It was a decision like they say love is a decision. A lot of people think it’s a feeling, they get it twisted. You decide to love someone. So there are some decisions you have to take in your life that you have to damn what anybody else thinks.

A Yumtastic Recipe for Plantain & Yam Porridge, Courtesy of The Kitchen Muse