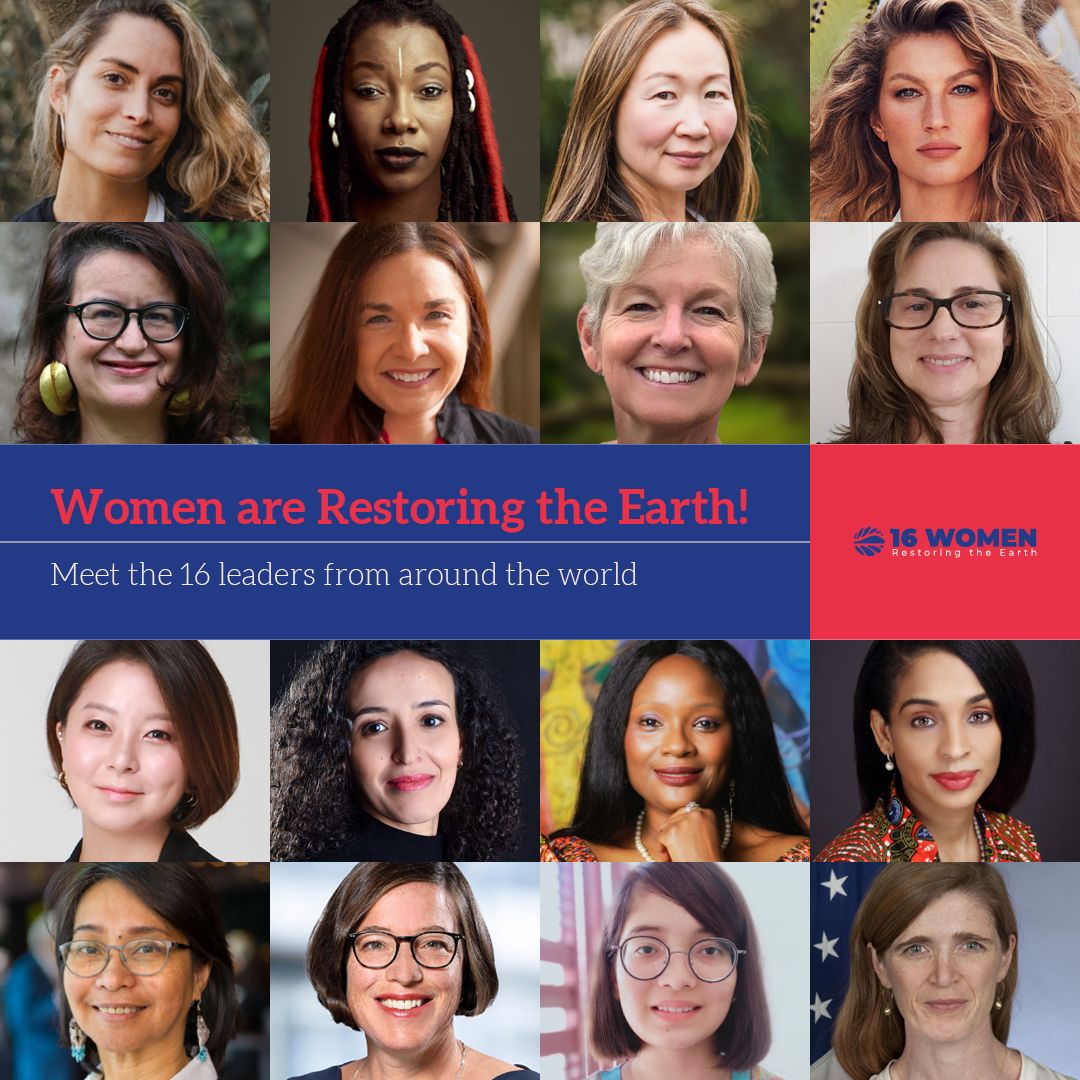 The outstanding contributions of these women, who span more than two generations and five continents, have led to higher commitments in international climate treaty negotiations, increased public awareness and activism, the rise of climate finance, the growing reach of science, and on-the-ground conservation and restoration across the globe.

The third annual 16 Women Restoring the Earth campaign encourages recognition of women in a world in which women are under-represented in science and technology – and are especially vulnerable to climate change and environmental distress.

Each of the leaders has been an active participant in the Global Landscapes Forum’s work and mission over the past year. ‘16 Women Restoring the Earth’ aligns with this year’s Women’s Day theme: ‘Gender equality today for a sustainable tomorrow’.

Meet some of these amazing women: 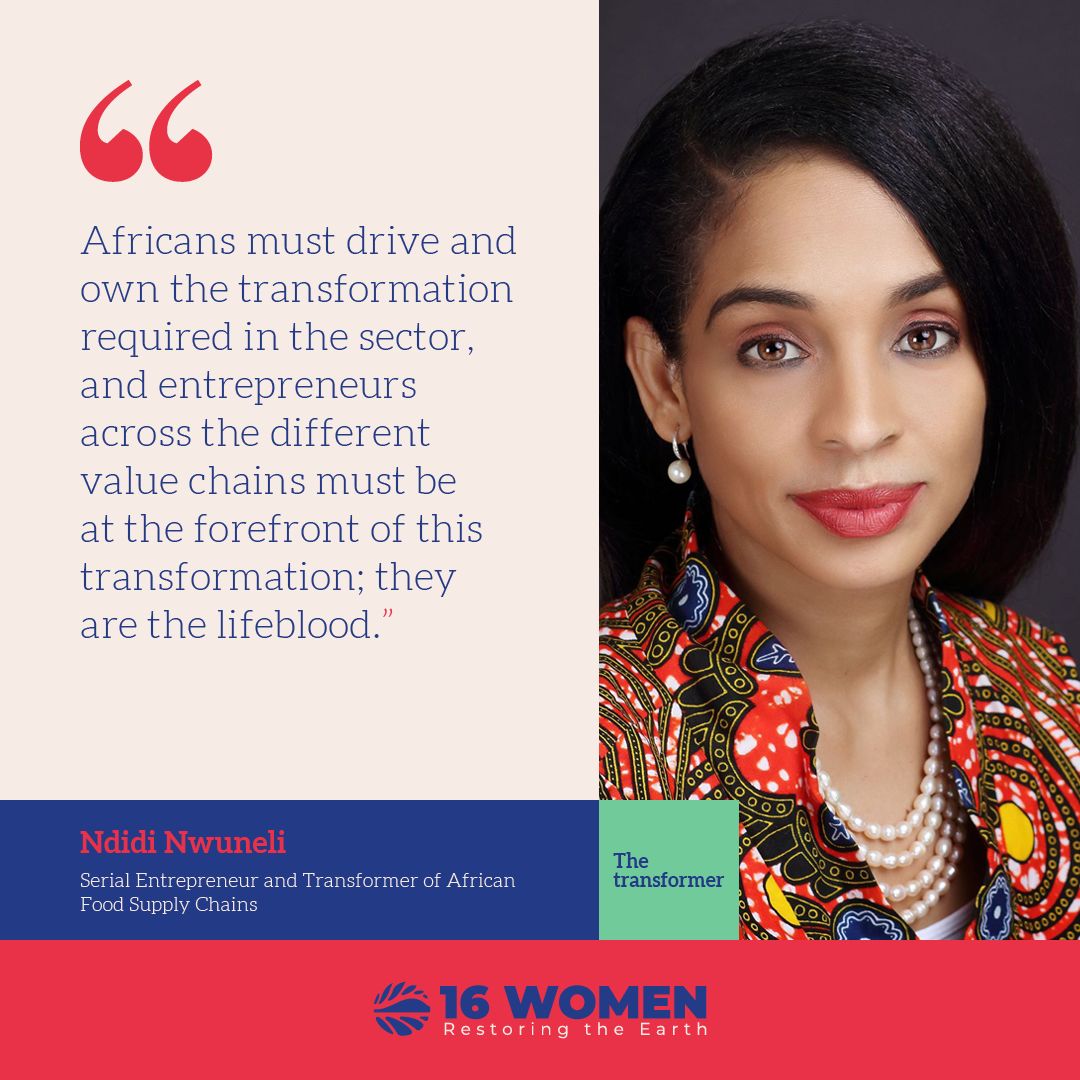 Food-wise, Africa is burdened with the negative stereotype of being a net importer in addition to experiencing challenges of famine and drought. But serial entrepreneur, Ndidi Nwuneli, sees the future differently, and entirely so.

In the past two decades, Nwuneli has co-founded two companies, Sahel Consulting Agriculture & Nutrition to shape policies and AACE Foods to mainstream African food products in local and international markets; founded the start-up Changing Narratives Africa to shift global perspectives on African food systems; and sits on more than 10 boards of global power, from that of the Rockefeller Foundation to the Young Global Leaders of the World Economic Forum to the Heineken-owned Nigerian Breweries Plc.

“As a continent naturally endowed for agricultural excellence, Africa holds significant potential to not only feed itself but also attain food security and become a net exporter of food,” says Nwuneli, who has devoted the better part of her career, which started in management consulting, to driving this transformation forward.

Social Entrepreneur Ndidi Nwuneli has been transforming the way Africa produces and consumes food in a holistic, sustainable way. She’s one of Global Landscapes Forum’s 16 Women Restoring the Earth. 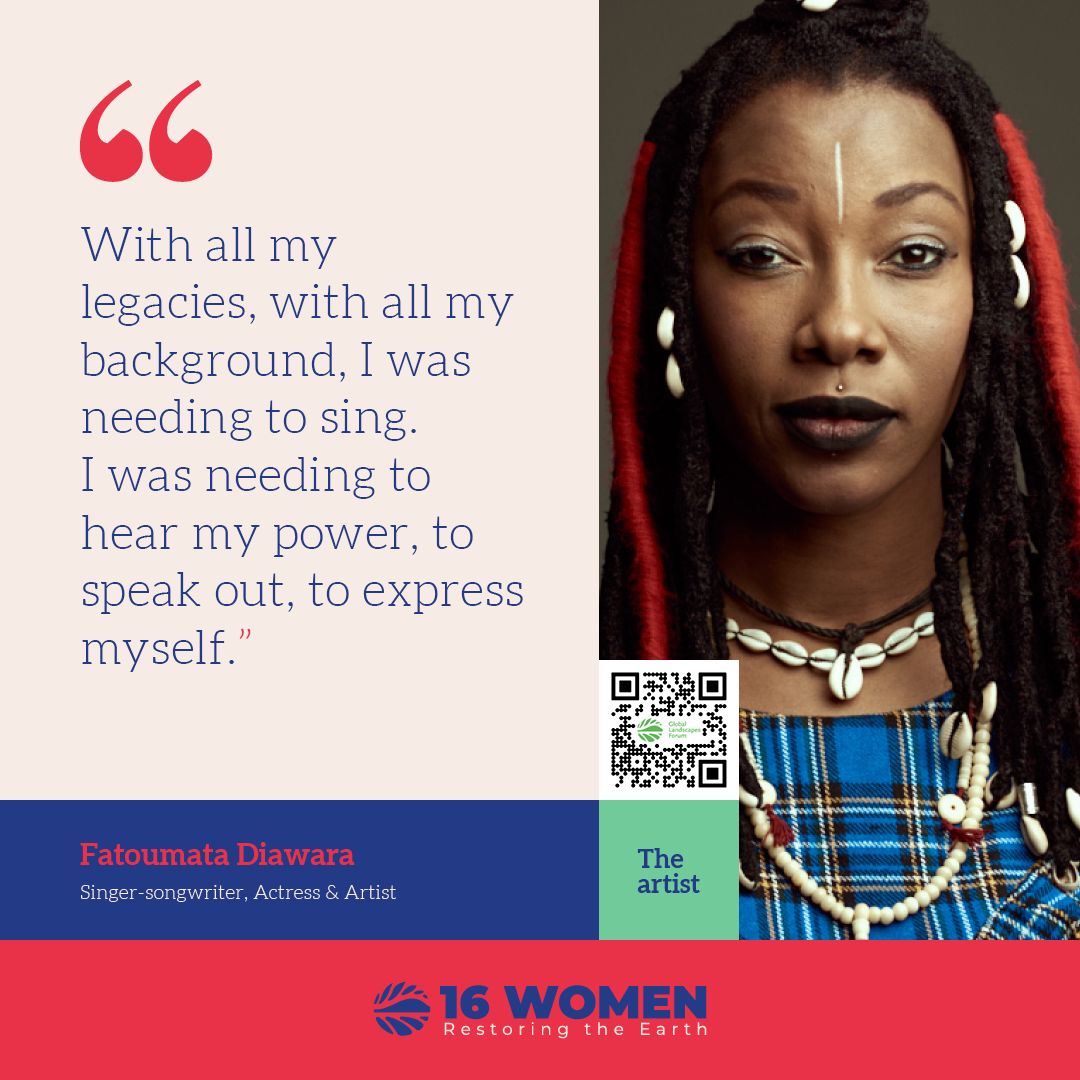 Born in Côte d’Ivoire and raised in southern Mali, Grammy-nominated Malian singer, composer & actress Fatoumata Diawara left her West African home as a teenager and traveled alone to France to pursue an acting career. And while she did and still does appear in various films – 12 to date, including 2014’s Oscar-nominated Timbuktu – it’s her musical career as a singer-songwriter and guitarist that she developed in stride with acting that has propelled her into the spotlight most.

Diawara is now one of the few African women music artists who performs solo. Often singing in her native Bambara language, she incorporates her region’s Wassoulou music – which is considered to be the one of the main harbingers of the blues – with groovy syncopations and smooth instrumentals for songs that are at once universal and deeply rooted in history, identity and place. 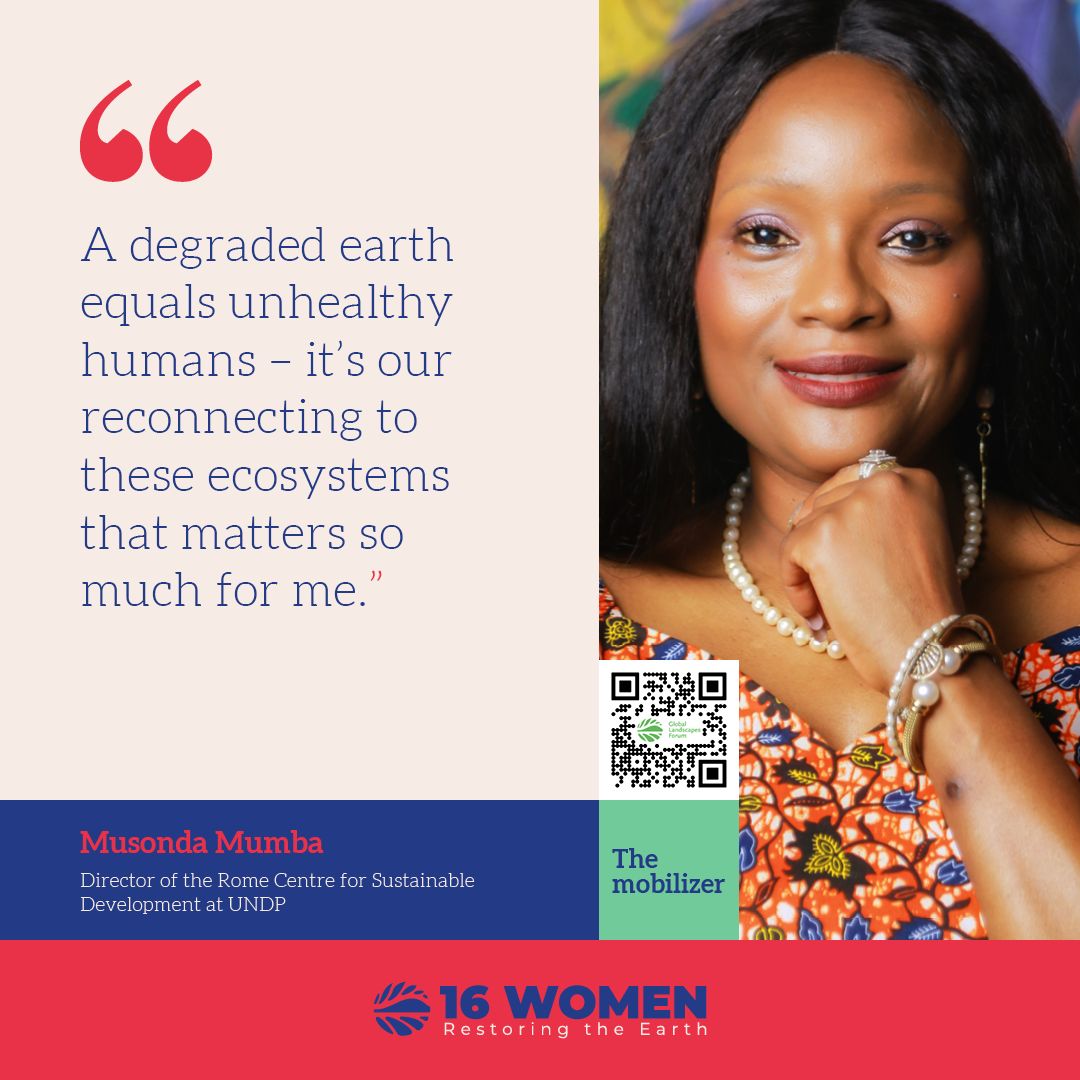 Even two years into a pandemic when Zoom fatigue is at a high, Musonda maintains a way of turning digital events into inspirational gatherings, weaving stories from her career as an environmentalist with new scientific findings and powerful human truths in her songlike Zambian accent, giving listeners a kick-in-the-butt to get going on their personal environmental goals, whatever they may be. (“Humans are emotive and relate easily to stories. Jargon is confusing and unnecessary,” she says of her public speaking secrets.)

Mumba, who is the director for The Rome Centre for Sustainable Development under the United Nations Development Programme (UNDP), has held office in nearly all the major conservation organizations over the past two decades, from the Ramsar Convention to WWF to UN Environment, where she spent more than 12 years working directly on the adaptation and restoration of ecosystems. And in this space where outright femininity is less celebrated than a good pair of glasses and slew of published papers (though she certainly has both – with red cat-eye frames and a Ph.D. from the University College London, no less), Mumba has carved out an image for herself as a fashionista, a mother and a proud African female determined to change the course of the world. 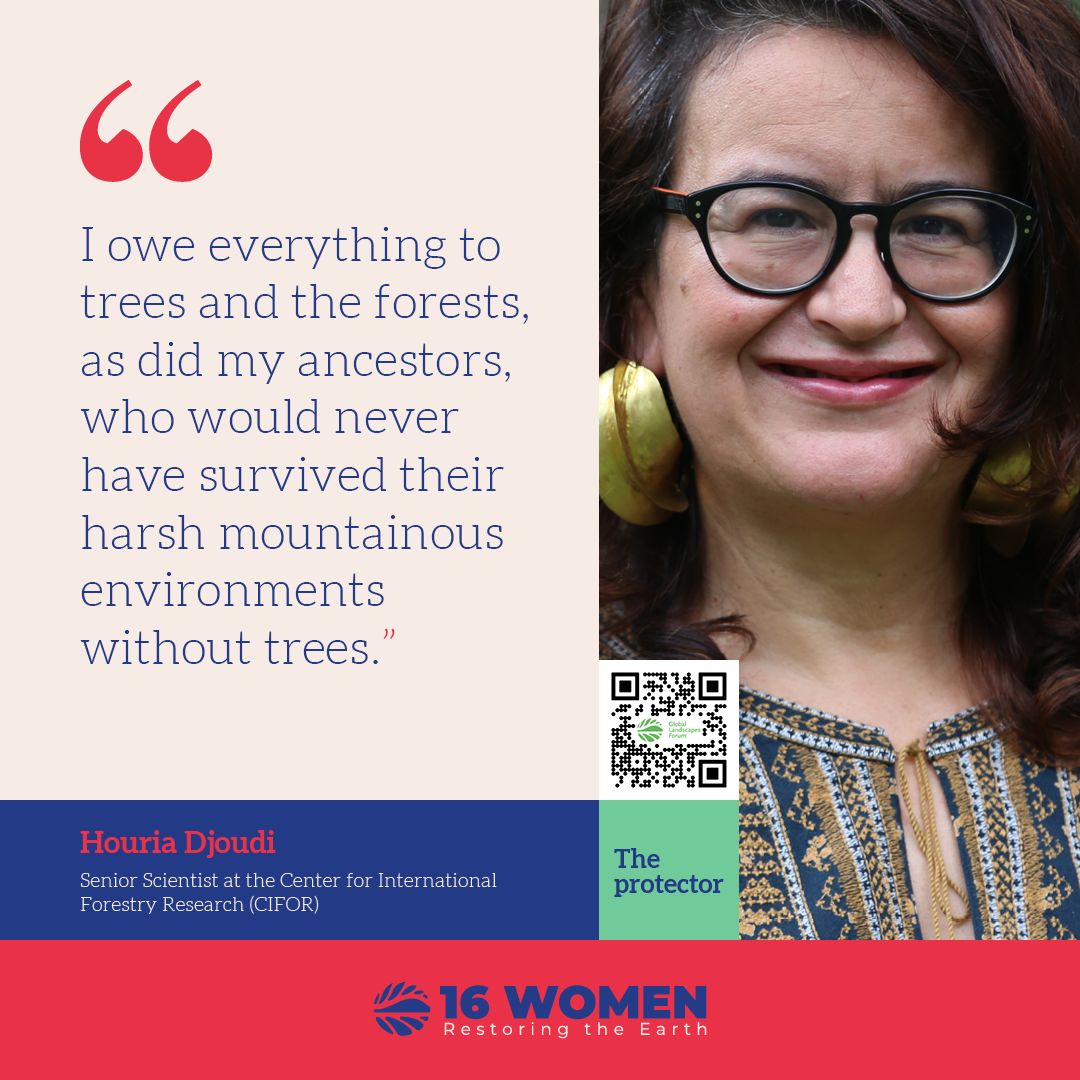 Raised in North Africa’s Amazigh culture, Houria Djoudi says that the power of language was instilled in her since her earliest years. Master poets and storytellers who pass on their skills to the next generation – known as aheddad bbwawal, “blacksmiths of the language” – were at the top of the social ladder of her home community. Encouraged by her parents, Djoudi spent long winter nights around fires with other children, each telling a tale to hone their use of words.

Her upbringing has allowed her to open her eyes and sharpen her understanding as a scientist to different perspectives when conducting her research: “There’s my own culture full of imagination, symbolic meanings and spiritual connection to nature, and the dry and expected – but non-existent – objectivity a scientist is supposed to have,” she says.

In weaving the two together, she’s developed a successful scientific career for herself, having published more than 30 peer-reviewed papers and conducted research in more than 10 countries, largely about the three topics closest to her heart: climate, trees and gender. She admits that her own bias as a woman plays into her worldview, but nevertheless, Djoudi struggles to understand why gender and social inclusion are only now receiving more attention in research and climate negotiations, when women produce the majority of the world’s food and yet still only have limited access to land or other assets and, on average, experience the challenges of climate change more severely than men. 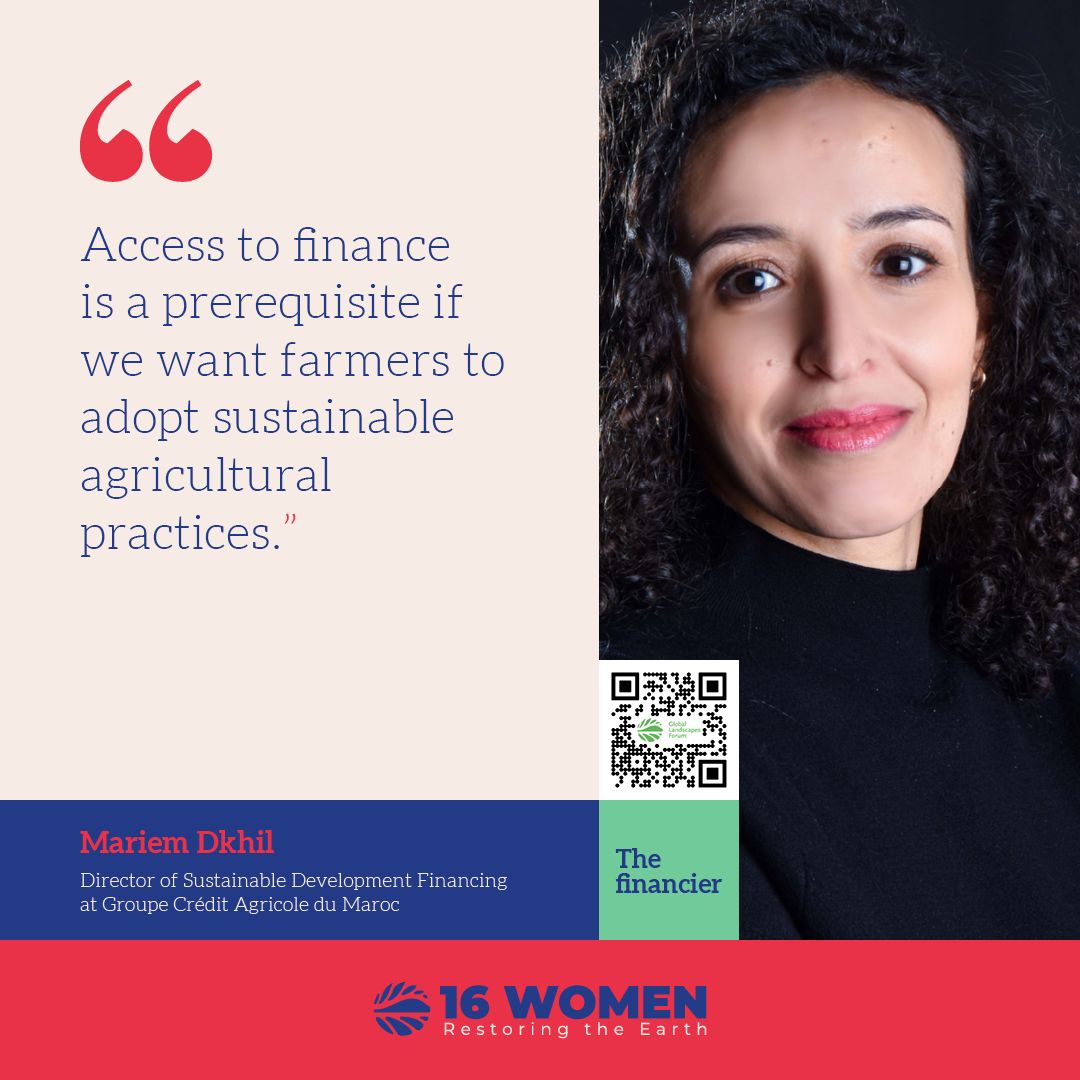 The importance of the financial sector’s role in agriculture cannot be overstated, especially as farming is increasingly uprooted by the effects of a changing climate and land degradation. These impacts are especially felt in Africa, where drought, desertification and soil salinization are upending the lives of smallholder farmers who lack the resources to adapt.

“Banking itself allows you to reach all population segments in order to enhance their revenues and lifestyle. Access to finance is a prerequisite if we want farmers to adopt sustainable agricultural practices,” asserts Mariem Dkhil. A trained agricultural engineer, Dkhil is the sustainable finance specialist at Crédit Agricole du Maroc (CAM), a Moroccan bank that has championed agriculture financing since 1961. During her time there, she has contributed to the creation of CAM’s subsidiary Tamwil El Fellah that provides collateral-free loans to smallholder farmers, giving them the opportunity to invest in middle and long-term projects. She has also enhanced the environment and sustainability standards of the bank and developed new products and services for climate-smart agriculture and responsible agricultural supply chains.

Today, she is committed to sharing the bank’s expertise with African financial institutions and mobilize investments for climate adaptation in African agriculture.

She also works to consider the sustainability and social impacts of projects, such as enabling an environment that provides access to financial services for women entrepreneurs – a sign that inclusivity and sustainability are indeed profitable investments. “I want other women to follow their lead and embrace the opportunities to have a positive impact,” said Dkhil when she spoke about sustainable finance at GLF Luxembourg in 2019.

Other women leading the earth’s restoration are:

“I find it absolutely healing that we, women, are beginning to put ourselves at the forefront of restoration projects.” Biologist Analí Bustos is one of Global Landscapes Forum’s 16 Women Restoring the Earth.

Galina Angarova in highlighting the role of indigenous leaders around the globe in preserving our planet’s ecosystems.

“What is climate change, at its core, other than a failure to love?” Climate scientist and activist, Katharine Hayhoe, believes in a just future for all.

“We must bring all our knowledge on the table and think about how to build a better future.” Leveraging science to save the Amazon is at the core of Luciana Gatti‘s work.

Margaret Kim is the CEO of Gold Standard, a foundation that makes ways for entities to maximise their impact for climate finance and SDGs.

Filipino lawyer and land rights activist, Nonette Royo continues the fight for the rights of Indigenous peoples to their forests and land.

At 9 years old, Ridhima Pandey sued the Indian government for not taking actions against climate change. Now at 13, she continues the fight for the future of our youth.

Pulitzer Prize-winning author and former US Ambassador to the UN, Samantha J Power, is one of the foremost women leading foreign policy.

Comet Nwosu: How To Go Beyond The Starter Phase and Achieve Your Goals

We Have a Winner for the #BNShareYourHustle March 2022 Edition