Watch the Teaser for Inkblot's Forthcoming Thriller "The Blood Covenant" 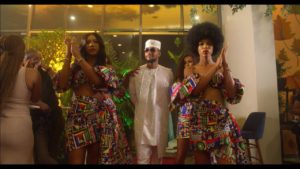 There has been a long-running argument over how Nollywood has contributed to money rituals and the desire among Nigerian youths to earn quick money. Inkblot Productions, in conjunction with Filmone Entertainment, intends to confront the concept by exposing the evils of money rituals rather than praising them with its forthcoming thriller titled “The Blood Covenant.”

Tobi Bakre, Erica Nlewdim, Alexx Ekubo, Shawn Faqua, Uzor Arukwe, and Omowumi Dada star in it. It follows the stories of three ambitious young men struggling to make it and tired of being looked down upon. In a bid to chase the fast life, they are seduced into blood money rituals and get caught up in a world of money and luxury, oblivious to the damage they cause by their choice. Their rise to the top eventually unravels as the police eventually close in on them as they get deeper and deeper into the blood money ritual.

The film, directed by Fiyin Gambo and written by Chiemaka Osagwu and Inkblot co-Founder Chinaza Onuzo, is a cautionary story about how even people with the best of intentions can be lured by the fast life.