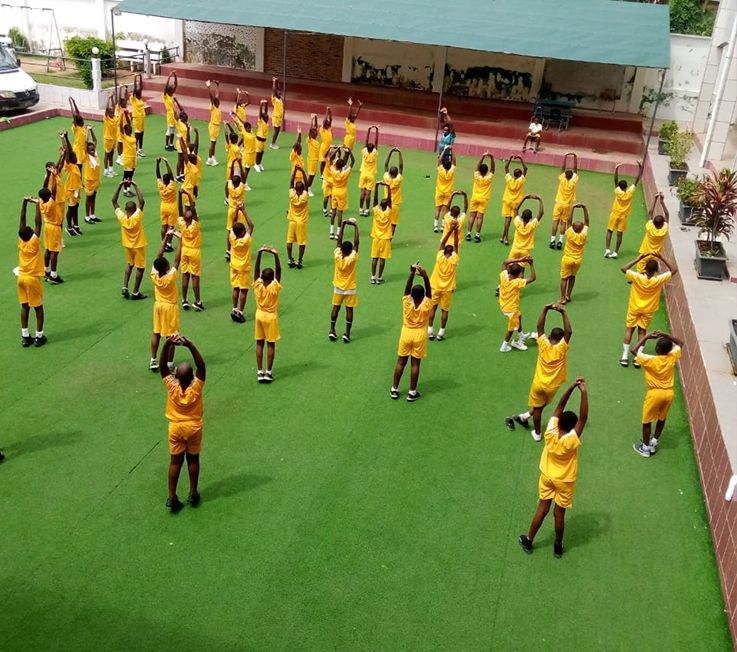 15-year-old Cameroonian Wendy Musi and her schoolmates are pushing past taboos and becoming champions of awareness and information around menstruation and female health.

At 12 years old, a shy Wendy Musi had never heard of a menstrual cycle. The fourth child and one of two girls in a family with six boys, menstruation was simply not a topic discussed at home.

Then, one day, Wendy’s world changed. When she got to school, she felt pains in her lower belly. When her French language teacher failed to show up for a lesson, she leaned on her desk and slept for the whole 45 minutes. When she woke, she felt liquid running down her legs.

“When I got up, a girl screamed my name. She shouted the word blood. I was confused. I tried to look around my skirt to see if she was telling the truth. Then I saw the stain and dried blood on my bench,” Musi narrated.

When other classmates, especially the boys, noticed this, they started laughing, pointing accusing fingers at her.

“They even began rumouring that I was no longer a virgin; I was spoiled. They talked about me, and I couldn’t do anything,” she said.

Luckily, her physics teacher arrived and quickly took her to the toilet.

“She told me not to be afraid because it was normal. She asked if my mother had ever told me about this,” Musi, now 15, recalled.

“That’s when she helped me to get cleaned up and showed me how to use my pad. After, she took me to class and explained what I was going through to my classmates,” Musi added.

Like Musi, many Cameroonian girls leave primary school and enter secondary school with little to no knowledge of the menstruation cycle.

While a study by nursing students from the University of Buea on ‘knowledge and management of menstrual problems in urban and rural high schools’ indicated that 73.5% of respondents had a good knowledge of menstrual hygiene, the study was limited to girls in the last two years of high school and did not include girls of Musi’s age. 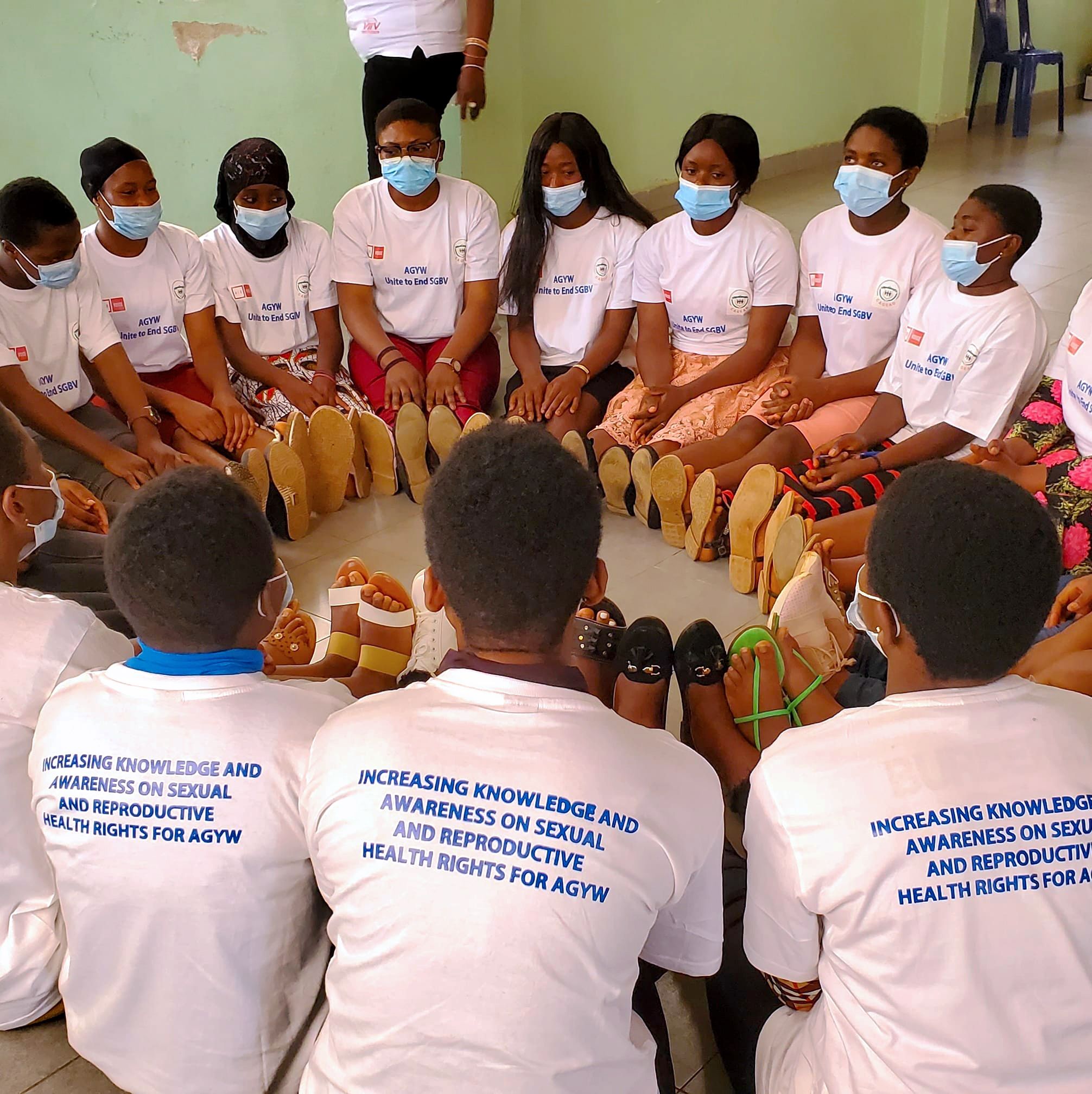 In the Cameroon school curriculum, students only learn about menstruation in the fourth or fifth year of secondary school.

Musi had not heard about menstruation at home because any topic related to her body or sex was considered ‘taboo’. She never discussed this with friends in her neighbourhood. Living in a male-dominated environment, she felt embarrassed and ashamed when she experienced menstruation, or, menses for the first time.

This stigma increased during the COVID-19 pandemic according to reports by a women’s rights foundation, Katchoua, after they visited 210 schools in 2021. Katchoua donates sanitary kits to underprivileged girls. The foundation also reported that access to sanitary products and facilities for school girls was limited.

The Centre for Advocacy in Gender Equality and Action for Development (CAGEAD) is one of those organisations working with secondary schools in Bamenda, North West region of Cameroon, to encourage conversations around menstruation not only in schools but also in communities with stereotypical cultures.

The founder and coordinator, Clotilda Andiensa and her staff encourage the creation of menstrual hygiene clubs to bridge the silence and kill the stigma on campuses.

At Musi’s school, the administration is making efforts to provide sanitary products to girls who experience incidents like hers on campus, by offering a functional nursing station.

After a visit to her school by a group encouraging open discussion of girls’ health issues, a girls club was established to talk about issues related to girls’ bodies, such as menstruation – and ways to deal with stigma. A teacher is invited to help coordinate and explain issues. 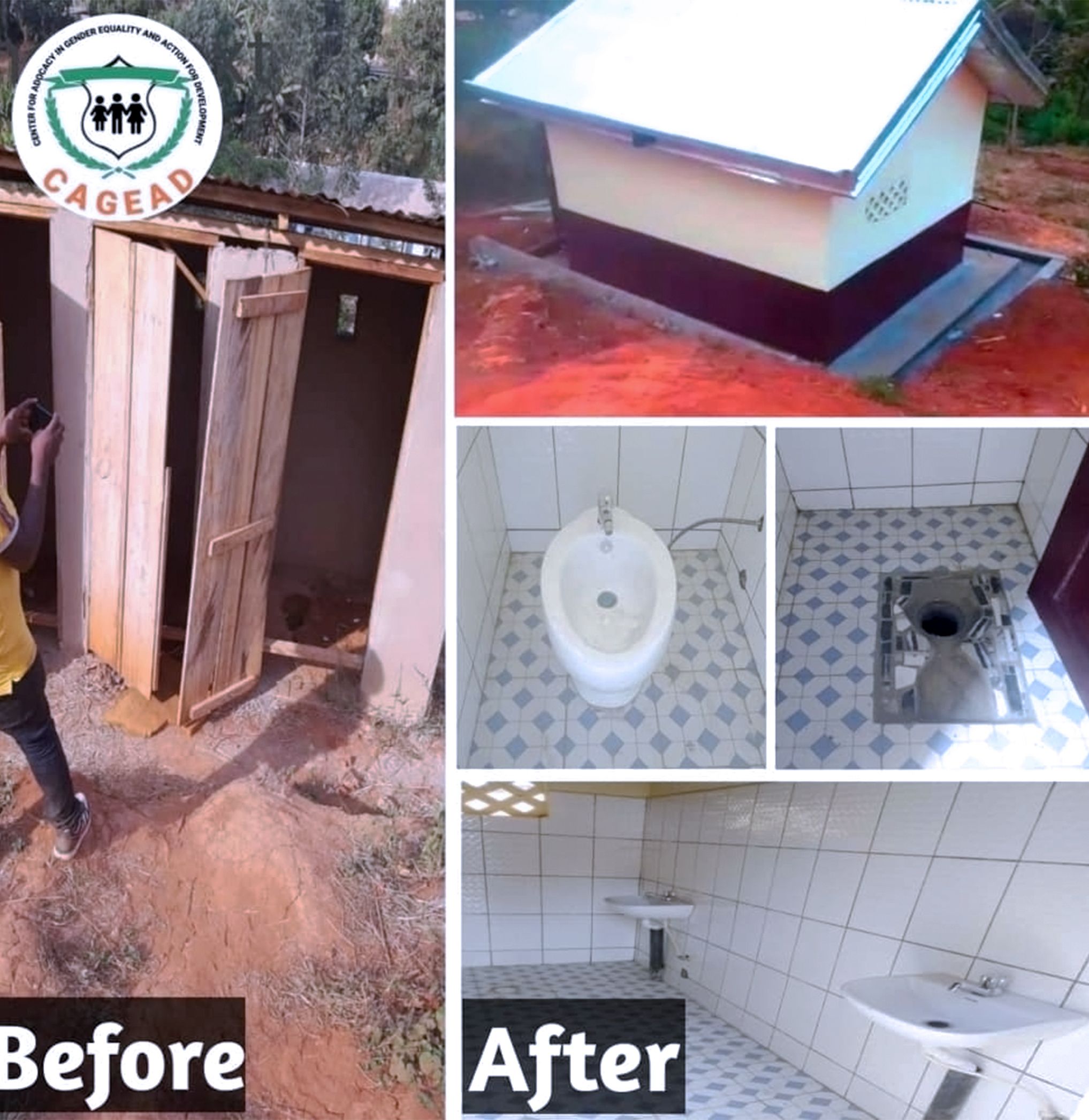 “We sing, dance, talk about ourselves, what we want to become. We talk about our cycles. The teacher teaches those unable to understand their menstrual cycle,” Musi said.

These extracurricular activities have begun taking off in schools across Cameroon. There’s often an open door day where the clubs are expected to present what they have been learning.

“We will dramatise some topics that have to do with the girl child. Last year we did a drama on a girl who didn’t know how to count her period days and got pregnant. We used it to teach other girls how to count. We also sang, and it was nice,” Musi remembered.

Over the years, the club at Musi’s school has grown from 40 to 120 students and Musi is among those selected as the club head girls.

She said that the support from her physics teacher on the day she had her menses has enabled her to support other girls facing teasing or hostile classmates and encourage them to avoid skipping school.

Although Musi’s school has all these provisions, however, this has not entirely stopped her male classmates from mocking her. She is, however, finding ways to overcome the ordeal. She explained that many of her classmates in the following days asked her how she was feeling, if it was painful and how they should behave when they also got their menses.

Musi realised that talking more about it helped her. Four years later, she is helping her younger sister embrace her menstrual cycle proudly.

With the help of social media, including WhatsApp, they both belong to various groups in school where they are able to drop short stories or pictures about menstruation.

“Sometimes, we see a funny video about menstruation and share it in our groups. People laugh over it, but they now know it is normal,” she revealed.

Musi’s 55-year-old mother, Angelica Ngum, said she has seen her child grow from a shy person to a mature and bold girl since she started playing roles in her school.

“Wendy was the shy one amongst all my children. I didn’t even know when she started seeing blood. She kept it from me, and I noticed it only the third time she had it,” she said.

“I don’t blame her; it is because the topic of menstruation was just uncomfortable for me to explain to her at first. It took me time to feel free and discuss menstruation with her,” Ngum added.

The businesswoman says she has learned much from her daughters about menstruation and menstrual hygiene. That includes learning to accept the topic in her home.

“Some of her cousins who come here, I tell them about their cycles and also teach them they could get pregnant if they meet a man during this or that period. I don’t feel ashamed again. It is normal today,” explained Ngum.

But not every girl is as strong as Musi, especially if they don’t have good counsellors in schools or at home to prepare them for the stigma that comes with menstruation. It becomes quite complicated for girls with male teachers who don’t understand how to advise them when faced with such a situation in class.

Kisuh George Chiambah, a male physical education instructor, said the first time he saw a girl menstruating was when he was in secondary school. He explained how the girl was sitting in front of him, shy and angry at the same time when she discovered she was bleeding.

“At the time, I was around form four and just entering puberty. It was funny. It was a surprise to us, and after that, many of us came to learn the topic in biology.”

Today as a senior instructor, Kisuh comes across many girls surprised by their menses in his class or getting it for the first time. With years of experience, he has derived ways to help these girls.

“Anybody who laughs at the person who is involved is punished severely. The second thing I do is take the child somewhere and call a female teacher or nurse to counsel and help the child,” Kisuh explained.

“Sometimes I advise female students already menstruating to always walk with a spare pad in their bags,” he added.

Kisuh also talked about sensitising his students to break the stigma surrounding menstruation. He encourages girls not to skip school and to carry out physical exercises during this period.

“Sometimes girls come to me and tell me they are on their menses and can’t do sports. I always tell them that being on their menses doesn’t stop one from doing physical activities,” the instructor stressed.

Sally Maforchi Mboumien, a women’s peace, security, and sexual reproductive health rights advocate from the non-profit organization Common Action for Gender Development (COMAGEND) believes that menstrual hygiene in schools and the stigma that surrounds it is something that requires intervention by the national government level, with a national policy to intentionally and purposefully address the issue. 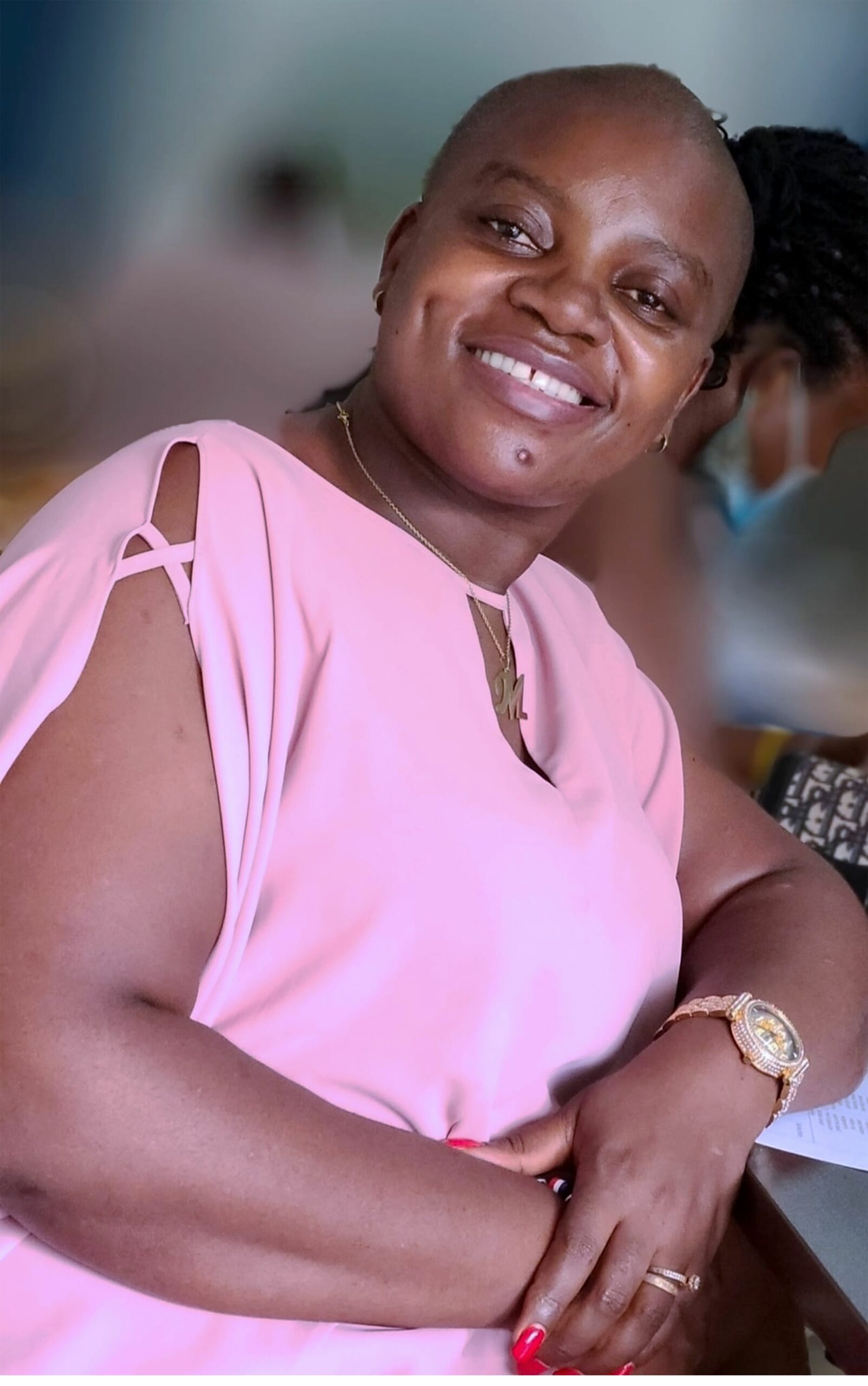 According to her, it is not only about providing basic materials such as pads when a girl is in difficulty but also providing schools with good toilets, potable water, and waste disposal facilities to help young girls overcome stigma.

“We need running taps in our schools so that girls can maintain hygiene. We need proper waste disposal facilities to assist these girls. Now stigma comes with a stain on her body. When a girl gets stained, that is when her classmates look at it and boo her. Sometimes these girls get stained because they lack basic provisions such as water and disposal areas,” said Maforchi said.

“It’s not just about providing the pads or kits but ensuring there’s water, good toilets, and disposal bins.”

“It goes a long way to reducing stigma. Because when we move around the campuses and see that this provision has been met, that’s already a sign of acceptance of menstruation in the school milieu and community. It is a collective fight,” Maforchi added.

At Government Bilingual High School Bayelle, where Kisuh teaches, the administration has partnered with gender equality to attend to the needs of girls during menstruation.

While urban schools like Kisuh’s and Musi’s, where pads are provided to students who find themselves in such situations, and others go through counselling, it is very different for many rural schools and those in less fortunate urban areas. Many of these are smaller schools and they often perform poorly during end-of-term examinations.

Candice Chirwa, a South African gender activist and self-proclaimed “Minister of Menstruation” in her fight against stigmatisation, once said, “in order to #BreakTheBias, I want to imagine a world where period dignity exists. I am going to tell you how a biological function has a major impact on gender inequality”.

“We need to understand that period poverty is an important global issue that requires important attention. Period poverty is the lack of access to sanitary products, menstrual health education, toilets, hand washing facilities, and waste management”, she added.

Chirwa is one of those who believe with all these accessories provided, stigmatisation and prejudices surrounding menstruation will end.

The United Nations International Children’s Emergency Fund, UNICEF, revealed that 1.8 billion people across the world menstruate every month. It further states that millions of these girls, women, transgender men, and non-binary persons cannot manage their menstrual cycle in a dignified, healthy way.

To address this, the United Nations Populations Fund wants the topic of menstruation to be normalised in every milieu by 2030 through the day’s theme, “Menstrual Hygiene Day: Making menstruation a normal fact of life by 2030” with a Menstruation Day to be celebrated every May 28.

[This story was provided to bird by Storify, an agency under Africa No Filter]