A recent trip to the cinema left me with a rather bitter taste in my mouth. I felt a little persecuted, a tad undermined and…………

So what can we do to positively influence this negative perception of ourselves? As this is an entertainment website; I will not bore you with a politically charged jerimiad. I’ll simply write on how some influential people in the international entertainment industry have ties to Nigeria or have been directly influenced by the country and the people. 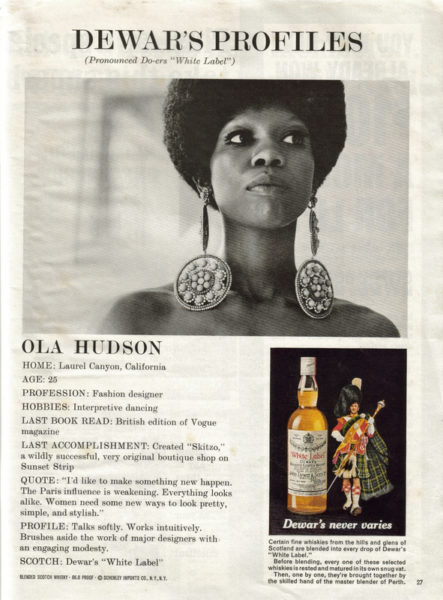 The subject of this iconic Dewars whiskey advert is non other than fashion icon; Ola Hudson. Ola was married to famous artist Anthony Hudson, Ola (of Nigerian descent) designed and tailored outfits for celebrities while Anthony (of English descent) worked as an illustrator and designed album covers for such stars as Neil Diamond and Joni Mitchell. 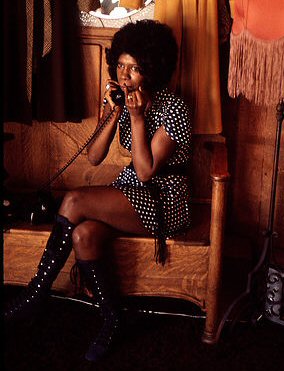 Ola was best known for her innovative boutique on the Sunset Strip called “Skitzo” and her work with former lover David Bowie for his film: “The Man Who Fell to Earth”. She also designed and tailored outfits for John Lennon, Ringo Starr, Diana Ross, the Pointer Sisters and many others. Ola was an integral figure in the uber cool sunset strip rock scene and her style is widely credited for directly influencing the style and image of modern rock music. Ola sadly lost her battle against lung cancer at the age of 62. 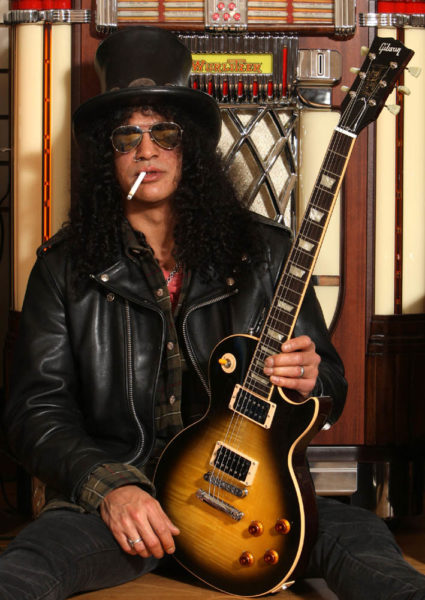 One of the most recognisable faces in the world today belongs to former Guns. N Roses guitarist Slash. Slash is widely credited as being one of the greatest rock guitarists of all time. In the course of his career Slash created some of the greatest guitar riffs ever recorded. His work on the Guns n Roses mega hit “Sweet Child of Mine” propelled their debut album “Appetite for Destruction” to sales in excess of twenty million copies; making it one of the highest selling debut records of all time (Notable mention: November Rain, Paradise City, Welcome to The Jungle and many others.) What can I say? GnR rocked. 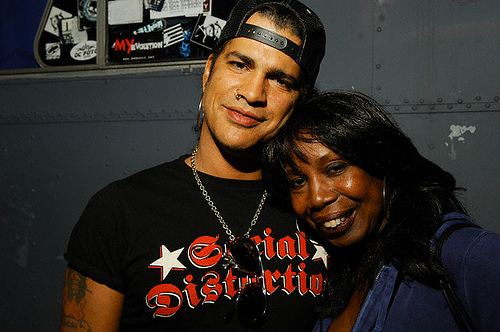 Slash the son of fashion icon Ola Hudson worked with Michael Jackson on a number of projects namely Black or White and Give In To Me on the Dangerous album; Morphine on the Remix album Blood on The Dance floor; D.S on History and privacy off the Invincible album. He has also worked with legends such as Ray Charles and Stevie Wonder. He is also a playable character in the game Guitar Hero 111 Legends of Rock. 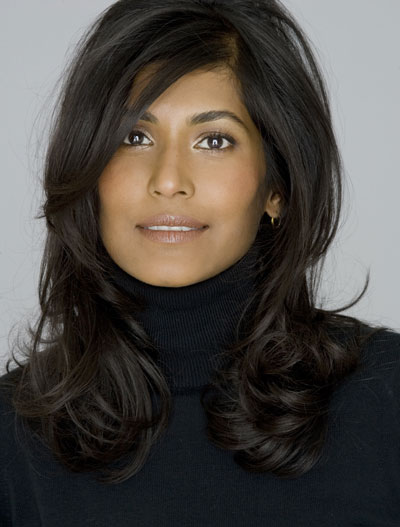 Many celebrities such as Madonna and undoubtedly some readers are fans of the makeup line; Ruby and Millie. What I find rather interesting is that co-owner of the line Ruby Hammer was born in and spent the first twelve years of her life in Nigeria. 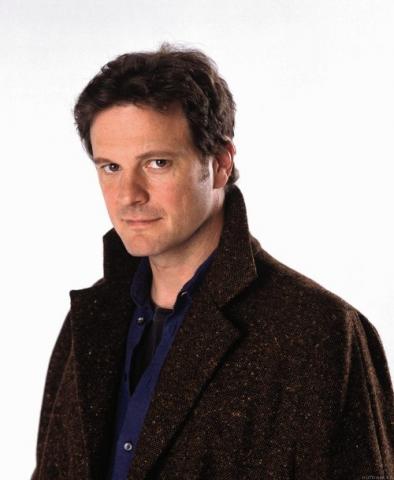 Classically trained British actor spend a good number of his childhood years in Nigeria. His parents were missionaries and academics who preached the word and educated people of rural Jos. The Emmy nominee and star of Mamma Mia, The English Patient, and Conspiracy has been quoted as “feeling a natural kinship when he meets Nigerians and hears the music or the language”. 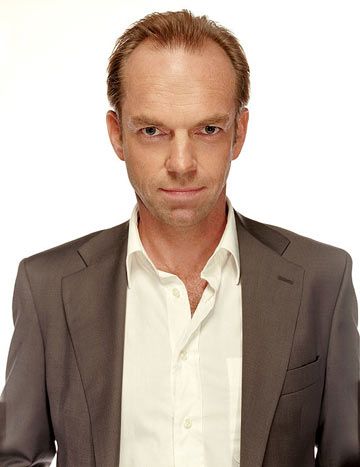 In the year 1960, a British couple celebrated the arrival of a baby boy at the University Teaching Hospital in Ibadan Nigeria. Little did they know that their son would star in six two of the highest grossing trilogies in cinema history. Hugo; starred in The Lord of The Rings trilogy, The Matrix trilogy, Transformers, cult favourite The Adventures of Priscilla Queen of the desert, V for Vendetta and a host of others. Hugo has won a number of awards in a varied and successful career. Imagine that, Agent Smith is Nigerian by birth.

There is a fair amount of talk about the Nigerian Music industry of today. I admit our guys are doing well, however the scope and influence of the music scene of the seventies on modern. rock and reggae is absolutely astounding.

Little regard is paid to the pivotal role that the Nigerian music played in influencing modern music. So I thought it best to speak on a few examples of legendary musicians that were influenced by this period. 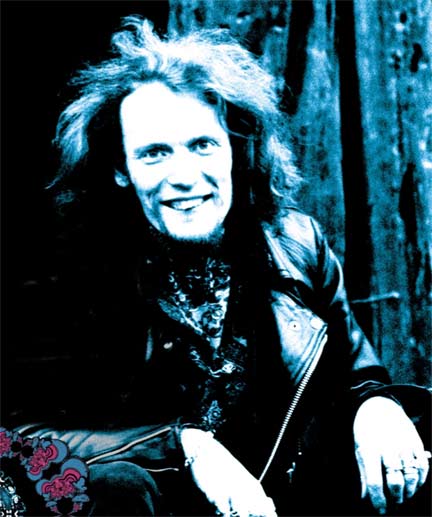 The South Africans have the best singers, the Congolese have the greatest guitarists, but when it comes to drumming; we win hands down. Therefore it is hardly surprising that Ginger Baker; Rock and Roll Hall of Fame inductee and former member of super group Cream. (The group has sold over 35 million records world wide, and their album wheels of Fire is the first platinum selling double album in history.

Widely hailed as rock musics first super group. Cream was made up of Eric Clapton, Jack Bruce and Ginger Baker. Baker, arguably the greatest drummer of all time spent seven years of his career living in Lagos making experimental rock music with the likes of Johnny Hastrup and Blo; spent a fair amount of time touring with Fela in place of then incapacitated Tony Allen. 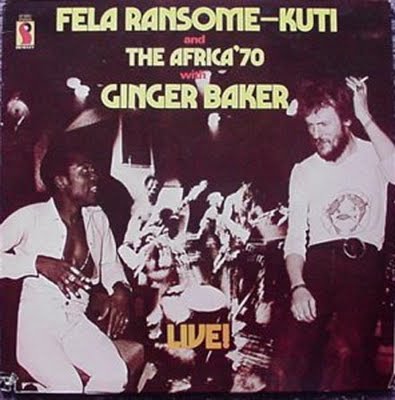 Fela and Ginger On One Of Their Tours

Baker remains to this day the only oyinbo to have sat in on Fela’s ‘inner cabinet’. 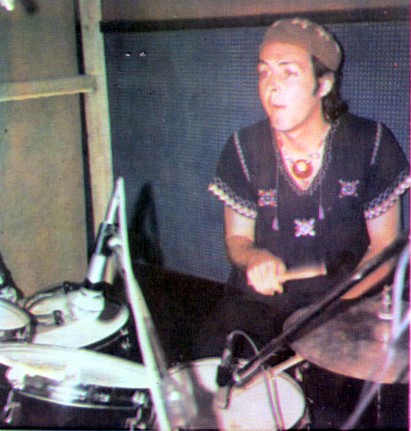 Yes the same Paul McCartney from the Beatles recorded the album “Band on The Run” with his group; Wings in Nigeria. Wings worked with Nigerian musicians and hung out at Fela’s Shrine initially. Mcartney fondly remembers shedding tears of joy watching the great man perform on stage. It wasn’t honky dory for long as Paul had a famous altercation with the King of Afrobeat himself. 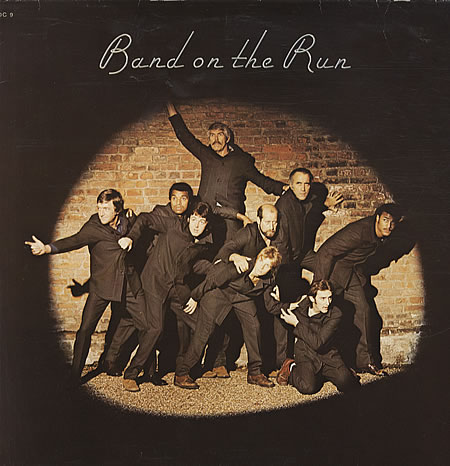 Band On The Run Album Cover

Band on the run was McCartneys greatest post beatles album. It was voted at number of the 100 greatest British albums of all time and Rolling Stone magazine placed it at number 418 out of the 500 greatest albums made. Yes it was recorded in Lagos. 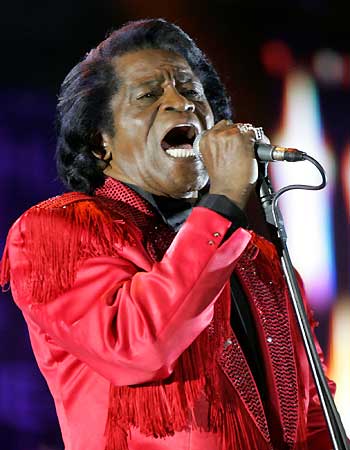 James Brown toured Nigeria in the early seventies and a trip to the shrine had James Brown enraptured. According to Bootsy, who was the bassist of the band: “Fela’s band was the funkiest cats” he had heard in his life. He said that they were totally “wiped out” by the sheer bodacity of the Africa 70 band. 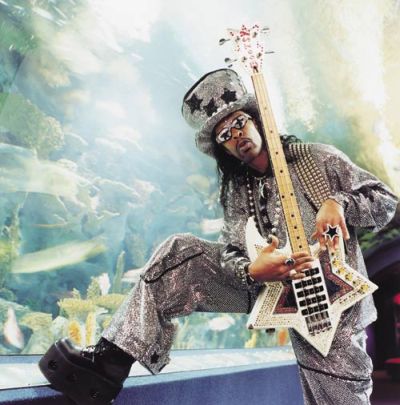 Legend has it that James Brown had his arranger watch and make notes of Fela’s movement and stage craft, so as to incorporate them in his act. What can I say? Iron sharpens Iron. 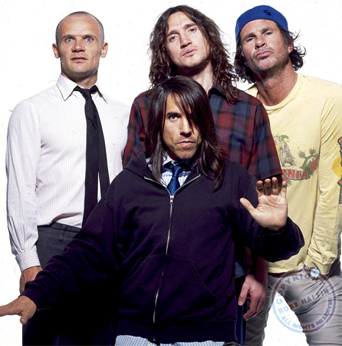 This Legendary rock band credits Fela Kuti as one of their primary influences. According to band member: Flea “Fela’s music was trance inducing”. So taken were they by the music that they once released a track called ‘Fela’s Cock’ in honour of the mans sexual prowess.

Flea was spotted at the shrine last year, during  ‘Felabration’ celebrating the life of the legend. 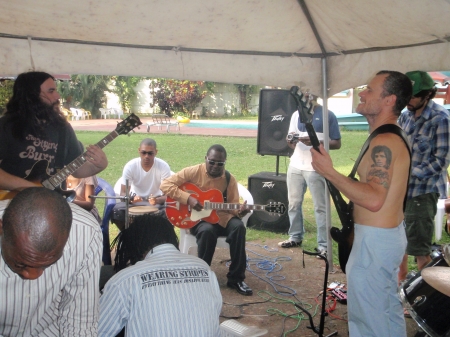 Flea at Rehersal Session for Felabration 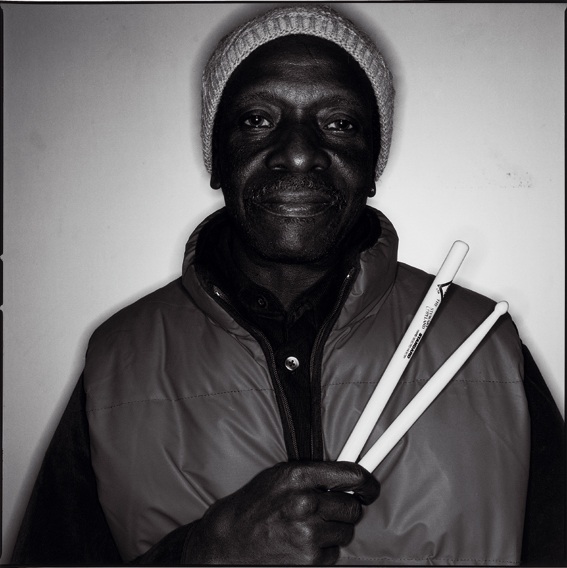 What do the Brit pop bands Pulp and Blur have in common with Charlotte Gainsbourg (daughter of British Actress Jane Birkin and French musician Serge Gainsbourg), Sebastien Telliere, Antiballas, Air and Brian Eno? They have either been inspired by or worked with Nigerian drumming legend; Tony Allen. 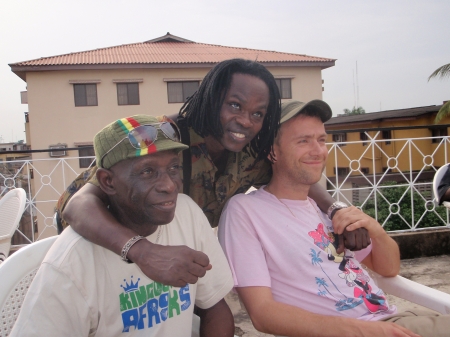 Tony Allen was decribed by ambient music legend Brian Eno as probably the greatest drummer in the world. He made his name as a member of Fela’s Africa 70 band and eventually forged an identity of his own. Such is his impact on music of today that he is one of the most sought after session musicians and he joined Damon Albarn, Paul Simonon and Simon Tong as the drummer for The Good The Bad and the ugly. Tony even got a name check on the 2000 Blur single: Music is my Radar. As Damon Albarn said:

“Tony Allen got me dancing”. 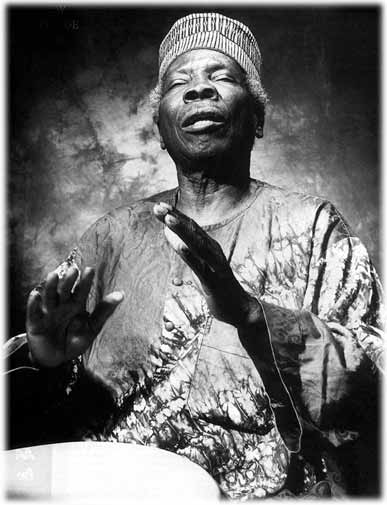 Virtuoso percussionist Babatunde Olatunji was one of the most talented musicians to come out of Nigeria. His 1959 hit Jingo lo ba was covered by Carlos Santana. The very first single by the group Santana was a cover of the song. The Santana version was called Jingo and was a bit hit in the seventies. So strong was the relationship between Santana and Baba Olatunji that they toured together in the late nineties. Fatboy Slim recently incorporated Jingo lo ba into one of his songs. Baba worked with Quincy Jones, Cannonball Adderly and Stevie Wonder.  Bob Dylan wrote a song called ‘I Shall Be Free’, and gave Baba a name check.

Baba toured with Martin Luther King during the civil rights era,  performed at the United Nations and his drumming made the Soviet Premier (Nikita Kruschev) take off his shoes and dance. Such was Baba’s influence that the former Czech President (Viclav Havel) personally requested he perform at a festival Prague; making him the first outsider to perform there before the end of communism.

His first album “Drums of Passion” has been available and in distribution for over five decades and he  won a grammy award for his collaboration with Grateful Dead drummer Mickey Hart.

I could go on if I so wished, but I thought it best to end this piece with a little food for thought. What makes us who and what we are goes beyond Nollywood, our new pop musicians, the love of money and our public image. We are a nation of talented, hard working intelligent and rather industrious people.

Granted there is truth in every stereotype but we must endeavour to bring our positives to the fore.

I bid thee farewell, I remain as always. Your humble servant.

Related Topics:articles
Up Next

Why do you keep DEFAMING us? District 9 and Sony, we’re talking to YOU!