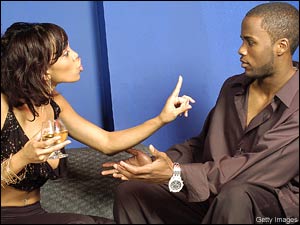 You can tell that relationship writers lose a lot of friends as they constantly reference their friends’ relationship woes in their articles…what can I say, woman must chop!

Now back on track…

A close friend of mine sent me an urgent BB message (For the benefit of the unacquainted, BB stands for BlackBerry…a majorly addictive communications device), her message was the sort of BB message that urges you to instantly pick up your phone and call because there must be some major gist! I responded and then called her immediately after that.

Kiru sounded so upset, she could barely speak. She began narrating her story;

She had spent the weekend at her man’s house. It was a 5 day weekend, one of those long weekends that only  you Nigerian residents enjoy (We in the USA never enjoy such luxuries). They had gone to the cinema on one day, enjoyed a romantic dinner on the next day and generally had a great time. On the final night, as they chilled on the couch, sharing a tub of ice cream and stolen kisses while watching an action flick; he suddenly moved away from her, sat up and looked into her eyes.

Kiru was startled, “Do you have a surprise for me?” she teased.
Abiola – “Sweets, you haven’t been taking good care of me”
Kiru – “Umm…Okay…”
Abiola – “We haven’t been having enough sex lately and you don’t even cook for me anymore plus when I asked you to iron my shirt for church on Sunday, you ignored me”

As Kiru described, she didn’t say a word at first. She simply looked into his eyes and then slowly moved her gaze to her “empty” ring finger and then back to him – then she shouted “ANUOFIA!” (This is basically a heavy Igbo insult). She grabbed her things and stormed out of his apartment.

As she told me, she spent the next 24 hours – crying, laughing and “thinking about her life”. After 5 years of dating, no ring, yet her man could confidently demand “wifely duties” from her.
Kiru’s experience is not peculiar. I know a lot of girlfriends in Nigeria and all across the diaspora who act as wives; some cook, some clean, some keep it rolling in the bedroom, some do all three while some go as far as adding motherly duties such as giving him money etc…(those girlfriend/wife/mother girls are a tale for another article)

On the male side, my friend Adamu is dark, tall and handsome with 3 degrees from universities in the UK and US. When he moved back home, he decided to focus on his career and did not date seriously for the first few years. When he was ready for a relationship, he started dating a pleasant young lady. I met her; she came across as a beautiful confident well-educated professional woman plus considering that she was close to 30, definitely not a “child”.

About 2 months into their relationship, she had to travel to South Africa for a work training course. During the course of their daily conversations, he casually mentioned that he would give her “something” to get herself a nice gift while she was away. A few days before her trip, she called him and reminded him about the promised cash. He assured her that his cousin in South Africa would meet her at the airport and hand over the money to her.

She kept on pressing him for the specific amount and he finally told her – $500. According to him, there was silence on the line and then she asked “Is that all?” and hung up the phone.

She did not call back or respond to any of his messages for two weeks after that. When they finally spoke, they managed to patch things up but he said he knew that she was someone he would never marry. Therefore, the relationship fizzled out soon after that.

There we go again…this time, girlfriend expecting the boyfriend to act as the husband.

As a single young lady living in metropolitan USA, trying to dodge the frogs and kiss my  Nigerian prince; I ask you this – what do you make of this phenomenon? One of my conservative (or so I thought!) aunties recently told me that “I must show the guy that I am a wife material otherwise other girls will show him and I will lose out”.

Must I dish out all that is supposedly reserved for my future husband to my boyfriend (when I get one); In the same vein, should I expect him to act as a husband as well?

Let us know what you think and also share your girlfriend-wife/boyfriend-husband experiences!