Three Weeks till the Finish Line! Bernadina, Lomwe, Vina, Mumba and Zeus up for Eviction from Big Brother Amplified! Have You Voted? 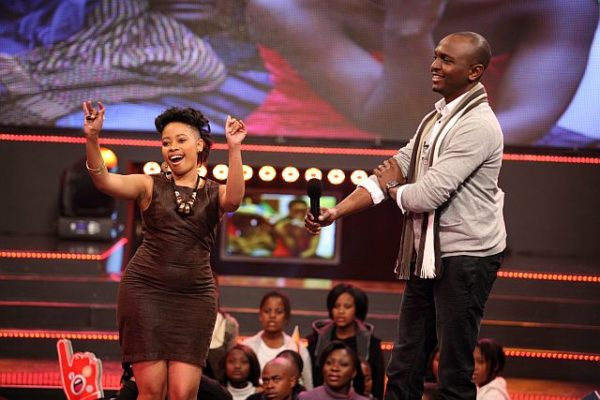 Botswana’s Miss P, Ghana’s Alex and Angola’s Weza were evicted from M-Net’s Big Brother Amplified on Sunday Night (10 July 2011) after receiving the fewest country votes from Africa this week. Miss P’s revelation to the other ladies about her and Alex’s strategy seems to have cost the duo their places in the House, while the eviction of a third Housemate came as a shock to viewers and Housemates alike. Half the Housemates have now been evicted from Big Brother Amplified – meaning that 13 are in the running for the two massive prizes of USD200 000 each! 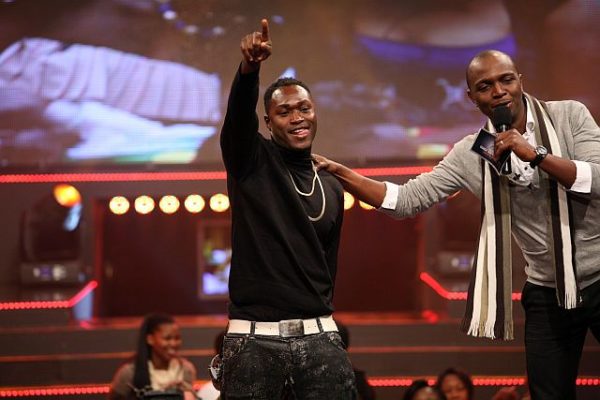 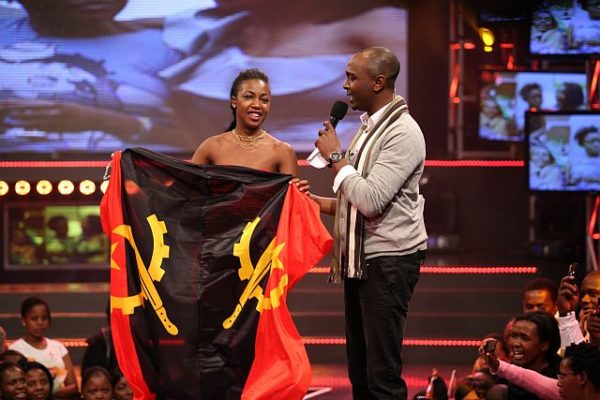 After Nigerian star Ice Prince ripped up the stage with his hit “Superstar”, IK took viewers into the House and asked Karen to reveal her Head of House ‘save & replace’ decision to her Housemates. “Here’s the deal guys – there’s Weza, there’s Alex, Miss P, me and Sharon O. That’s a hard choice,” she told them. “And what I did… I didn’t do anything,” she said with a shrug. “I swapped no one. I put myself up”. The Housemates stared at each other for a second as her words sank in, before they rose to hug her.

After a performance by the Amplified dancers, IK took viewers straight back into the House. “This is where it gets serious. Housemates, when I call your name, please stand up,” he said. After a pause, he called out Miss P’s name. “Miss P – please leave the House now” he said, without naming another Housemate. Once she had emerged on stage, IK confirmed that she had indeed become the next Housemate to be evicted from Big Brother Amplified – and asked her how she was feeling.

“I’m awesome, I’ve been preparing for this, you know I’m a game-player and this is part of the game,” she told him. “What was your best moment in the House?” he asked. “I’ve had so many! I can’t actually pick one. I liked the task where we were all tied up together ‘coz it brought us together – but then we hated each other,” she said. When quizzed about who she thought had nominated her, she said she had no idea, but “probably the girls”. After viewing the nomination clips, she told IK that Luclay’s nomination had hurt the most. Then it was time for her to Blow a Fuse. IK read out the detail: “One Housemate must put on different clown faces every day of the week, this week. Makeup is available in the store room, which means this Fuse commences almost immediately.” He turned to her for a name. “I can’t do that to Alex…” she said as the crowd chanted the Ghanaian’s name. ”Mumba – I need Mumba to come out of the closet, so Mumba,” said Miss P.

IK bid her farewell – but immediately took viewers back into the House. “You know the drill, I wish I had more good news, but…. Alex please stand up,” IK told the Housemates. “Sharon O, please stand up…. Sharon O, you have been saved. Alex, please leave the House now,” IK said.

When the Ghanaian arrived on stage after a second Ice Prince performance, IK asked him what he thought had gone wrong in the House in the last week after things had seemingly been going well for him. “I think that the Jerry Springer Show blew me up!” he exclaimed. “So are you regretting the plan you had with Miss P?” quizzed IK. “No man, I have no regrets, I enjoyed myself. It was a blast, a great experience – I’m looking forward to another one,” Alex told him. “What do you feel you could have done differently?” IK asked him. “Truthfully, I don’t think I would have changed anything, maybe I would have just been more cautious with my alliance with Peo, because when you hurt a girl, she goes in,” said Alex with a rueful smile. Then it was his turn to ‘go in’ and Blow a Fuse: One Housemate must make all the other Housemates’ beds every day for one week. This fuse will last until this time next week. “The crowd said it – Weza!” said Alex, selecting the Angolan as the recipient in response to some intense chanting from the crowd. IK had time for one last question: “You got the first and maybe the last kiss – but who were you really after in the House?” “I mean, I’m feeling all the women, you understand, African women come in a lot of forms, a lot of shapes…” said Alex cryptically, before leaving the stage.

Just as the Housemates had started to relax, IK’s voice boomed into the House again. “It’s a tough day, I wish I had some good news…” he said ominously. “Karen and Weza please stand up,” he said. “Karen you have been saved, Weza you have been evicted from the House”.

As Weza emerged on stage, IK confirmed that she had also been evicted from the Big Brother Amplified House. “Do you have any regrets?” asked IK. “IK, I never regret anything I do, I only regret the things I didn’t do, so in this case, no regrets whatsoever,” she said, giggling. “This thing with you and Luclay – tell me about it, how serious was it?” he asked as the Angolan smiled coyly. “Would you date him outside the House?” he probed “IK, Luclay has a girlfriend, we’re just very good friends,” said Weza. Digging deeper, IK proposed a hypothetical: “Imagine he didn’t have a girlfriend – if he didn’t have a girlfriend and he was available, would you date him outside the House?” “No, we’re just very good friends,” said Weza again. After seeing her highlights and nomination clips, it was her turn to Blow a Fuse: One Housemate must pack all their clothes and put them in the store room. That Housemate must borrow clothes from every other Housemate for the week.” “Oh my gosh – Karen – the crowd chose you,” said Weza after some thought. “There was a thing with Alex, when Alex came into the House you had some interesting moments. What exactly do you feel for him?” asked IK as a tough parting shot. After smiling shyly and trying hard to avoid the question, the Angolan eventually answered: “That’s a very good question IK, I’ll get back to you!” before departing the stage.

Two Big Brother Amplified Housemates will walk away with massive prizes of USD200 000 EACH on 31 July – there’s still a lot of action to come on Big Brother Amplified! Big Brother Amplified is headline sponsored by Coca-Cola. Fans can catch all the latest news, video – and all-important voting information – at www.mnetafrica.com/bigbrother. Tweet Big Brother @BigBroAfrica, send SMS messages to the on-screen strap, visit the Big Brother Africa Facebook Group to get the low-down on the continent’s favourite reality show and get updated news and two video streams – and houses – by pressing the “OK” button on your DStv remote when on DStv Channel 198.

Nominations – Who Is Up for Eviction?

Five Up for Eviction as Vimbai Saves Wendall

After the shock of seeing three of their number leave on Sunday, M-Net’s Big Brother Amplified Housemates had to re-focus on another set of nominations on Monday (11 July). Thirteen Housemates have left and thirteen remain – and 5 are up for eviction again this week! Bernadina, Lomwe, Vina, Mumba and Zeus all found themselves in the firing line after Head of House Vimbai saved Wendall and put Mumba up in his place.

· Vimbai didn’t waste much time in saving her fellow Zimbabwean – and love interest – Wendall when she headed to the Chat Room, but the big surprise was that she replaced him with Mumba instead of Karen. She and the Nigerian have not seen eye-to-eye since Karen gave Wendall a massage. Vimbai had also nominated Karen for the last two weeks running, so it was a surprise that she didn’t take the opportunity to put her back in the firing line.

· During the nomination sessions, the ladies stuck to their strategy of nominating the men. Most surprising was Kim’s nomination of Lomwe, with whom she has shared some intimate moments. She told Big Brother that he is “too reserved”, making it hard for her to trust him.

· Both Vimbai and Vina nominated Zeus – the former because of the way his dalliance with Karen showed disregard for his girlfriend outside the House and the latter because she felt he was “using” her fellow Nigerian.

· Kim, Bernadina, Millicent, Mumba, Vina, Karen and Sharon O all nominated Wendall for a variety of reasons – mostly, it seems, his strategy of keeping a low profile while being extremely competitive has caught up with him.

· Millicent, Hanni, Vimbai and Karen are the only women who nominated other women. Unsurprisingly, Karen and Vimbai’s ongoing feud saw them nominate each other.

· Millicent nominated Vina and Hanni chose Bernadina alongside her nomination of Zeus.

· Lomwe based his decision on the people he has interacted least with, naming Hanni and Mumba.

· Zeus nominated Kim and Vina (who coincidentally returned the favour!).

· Luclay nominated Bernadina and Zeus, while Wendall named Zeus and Vina as his choices.

The winner of Big Brother Amplified, headline sponsored by Coca-Cola, will be named on 31 July – and the power to award USD200 000 each to TWO winners, rests in the hands of the viewers.