Double Goodbye on Glo Naija Sings as Precious & AM Ok Exit the Stage! Who's Got Your Vote This Week? 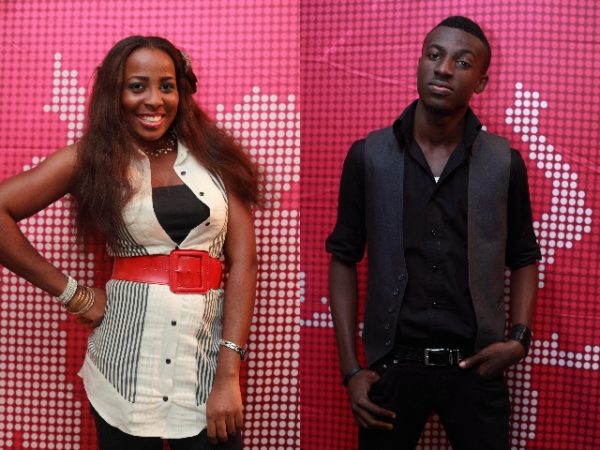 It was all about the Afrobeat this week on Glo Naija Sings.

Each contestant performed two songs by Afrobeats Maestro Fela Anikulapo-Kuti with a live band. The only exception was Vicky who also performed a track by Lagbaja. Some performances were good, others blew us away and some made us wonder why they are on this hit show to begin with.

We really wished the host Darey embraced this week’s theme by wearing something more traditional but as always he looked good.

2nd Song: Argument
Mattade’s second performance was flat, boring and he really needs to work on his vocals and make better use of the stage.

2nd Song: Lady
Tee Songz really made all the ladies in the house feel like Fela’s definition of a “Lady” and really carried the band & the audience along.
You rock Tee Songz!!

2nd Song: Lagbaja – Konko Below
We couldn’t take our eyes off Vicky, she performed Lagbaja’s Konko Below with so much fun & dexterity. She brought life to such an old song and made it sound more contemporary.
You go Girl!

2nd Song: Coffin for Head Of State
We get that Oni tried to copy Fela’s masculine voice but it is no excuse for her to totally sacrifice her sonorous vocals. The only thing interesting about this performance was the lovely neck piece and ankara jumpsuit she wore.

2nd Song: Open and Close
Christian’s second performance was o.k, he made better use of the stage and he got the audience grooving.We really wished his voice was a bit low at the beginning of the song and higher at the middle but all in all it was a good performance.

Yeni Kuti
Yeni Kuti, the daughter of the Late Afrobeats Maestro Fela Anikulapo-Kuti was this week’s guest judge.Yeni said Tee Songz & Vicky really stood out and Mattade to her was O.k. Not Bad! Not Bad!! she said to Christian that at the beginning of his performance he was out of tune but later on picked up & got with the groove.
Oni was the unlucky lad this week as Yeni said she didn’t project her voice very well & she needed to practise more.

Onyeka Onwenu
One of Nigeria’s foremost songstress Onyeka said Vicky was versatile, consistent and in control of the song, she also commended Tee Songz for good stage management but cautioned him not to get to carried away and praised Christian for really listening to his mistakes and improving.Mattade to her wasn’t audible enough & needed to find something inside to perform very well while Oni got this week’s axe from Onyeka telling her it wasn’t just her night.

Olisa Adibua
Olisa pointed out to all the contestants that some of their vocals were sacrificed for stage performances, he said Vicky was defintely tonight’s star,Christian finally joined the party & Tee Songz got away with his performance for his ability to woo a crowd but needs to work on his vocals.Oni to him made a classic mistake for trying to copy Fela and she chose the wrong songs and said he was surprised that Mattade is still in this competition.

Voting!
Here are the details you need to know to ensure your fave stays in the Glo Naija Sings game!
You can vote online here; the page also includes all the numbers for the SMS lines and details on how you can vote on MXiT.

Don’t let these aspiring superstars down! Here are the Top 7′s details, unique numbers and the songs they performed

Engaged – He “Put A Ring On It!” Nigerian Rapper Ikechukwu proposes to Sarah Ofili – She Said Yes!