Ofilispeaks: Three Things I Learned From Getting Kicked In The Head

Growing up in the 90’s, my brothers and I were addicted to martial arts movies! From “Revenge of the Ninja” to “Drunken Master” we were completely hooked by the acrobatic moves and skills displayed by the fighters. Whether it was Jackie Chan whopping a bad guy with a chopstick or Steven Seagal breaking one of the 206 bones of his enemies, we simply loved every moment of those movies. Like most little kids, we imagined ourselves as the movie actors, jumping and fighting each other. We spent hours replicating the moves on ourselves and on our home furniture as we flew from the drawer to the bed, yelling and kicking, turning our home literally upside down. After several broken plates and bloodied mouths, my parents became fed up and decided to put a stop to the madness. Their solution was to send us to a local martial arts studio just down the road from our house. Unfortunately, this studio did not teach any of the violent martial arts we had seen on TV – there were no ninjutsu, kung-fu or breaking-bones-fu. Instead, we were introduced to the world of Tae-Kwon-Do. It did not have the violence we craved, but it was the best we had, and we now had legal permission to punch and kick ourselves to death. As long as we killed ourselves outside the house, my parents were happy to pay the studio fees. It was a win – win situation!

Tae-Kwon-Do was far from what we imagined. We did not perform flying kicks or any of that crazy stuff we saw on TV; instead we underwent rigorous and intense training sessions. The sessions lasted anywhere from two to three hours, during which slowness and sluggishness were addressed with yelling and physical punishment. We worked out vigorously, sweating and pushing our body to the limit, and only when it looked like we were about to pass out did we get a short break, but then we had to resume the kick, punch and yell regimen until we almost drowned in our own sweat! Only then were we allowed to go home. Our efforts were not in vain, though, because depending on how well we performed in our exercises, we were rewarded with colored belts and badges that represented our skill level and experience. One started off as a white belt, which was the color for beginners, and then progressed to a yellow belt, then blue, brown, red, junior black and, finally, black!

Getting those colored belts was a big, big deal. From time to time, we would fight amongst ourselves to prove our belt rankings. Our belts were a status of power – a yellow belt dare not challenge a red belt, and a white belt better not challenge anybody. We fought with carefully padded uniforms to ensure that our vital organs were not accidentally knocked out by an over-zealous Bruce Lee wannabe fighter, but for the most part, promotion was based on experience and had little to do with our fighting skills and abilities. We rarely fought outside our club, so it was a delight when it was announced that we would be participating in a local tournament in the community. I was uber-excited, as this was the first time I would get to unleash my skills outside the club. For days I dreamt about fighting in front of a large crowd, as scenes of Karate Kid flickered in and out of my head.

After what seemed like an eternity, the day of the tournament arrived. It was not the colorful Karate Kid arena that I had dreamt about. The sound of hundreds of kids in different colored belts kicking and yelling brought me back to reality. A reality that was soon interrupted by tournament registration requirements as we were promptly divided into our fight categories based on age.

My first fight was against a tall, skinny chap and I had a problem with that. It was not his lack of physical stature that bothered me, but rather the fact that he was a white belt and I was a brown belt! If over-confidence needed an ambassador at that moment, I would have been the perfect candidate. The slight smirk on my face did little to hide the obvious thoughts that were circulating in my mind, one of which was: “This is going to be quick and easy.” However, just as the referee began relaying the customary “no kicking in the groin” reminder, I noticed a grin on my opponent’s coach’s face; it was one of those looks of confidence that made you know something was up.

Just like George Foreman did Mohammed Ali in the Rumble in the Jungle, I kept attacking, but my opponent did nothing…he just stood back and let me do all the fighting. “What is wrong with him?” I murmured to myself.  And then it hit me, quite literally and in the head…kbam! I never saw it coming, and I still don’t know if it was a direct kick or a round house kick; all I remember is that there were bright colorful stars all around me, the kind you see in cartoons but never actually realized existed. They spun around my head in bright yellowish flashes and made funny buzzing sounds. I counted about 20 or 30 of them before I was lifted off the floor. I tried to continue the fight, but by then it was over. With one swift and unexpected kick to the head I had been knocked out!

We are often told that there is a lesson to be learned from every mistake, but on that day I learned not just one but three powerful and painful lessons about life and business.

Lesson #2: it only takes one kick to get knocked out (especially when you are not expecting it).

And the most important lesson of all, Lesson #3: It does not matter what color of belt you wear to the fight; what matters is whether you can actually fight! [excerpt] 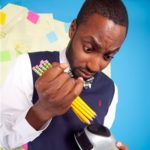 Three Thing I Learned From Getting Kicked In The Head is an excerpt from Ofili’s latest book How Laziness Saved My Life to to find out how it saved his life click http://ofilispeaks.com/getlazy. Ofili is an award winning  motivational speaker, author, success coach and entrepreneur who blogs about life, success and entrepreneurial excellence. Follow him on BBpin:3300ED8F , twitter , facebook or subscribe to his blog for more success TIPS!”