On The Beat... It's Davido! Get A Sneak Peak Into "Omo Baba Olowo: The Genesis"

Maverick, one word that describes the young singer/songwriter and producer, in short – musical phenomenon – that is Davido. Since he burst onto the scene with his Naeto C-featured (hence, endorsed) “Back When”, Davido‘s star has only gotten brighter. But, “Back When” was back then when we didn’t know he was David Adeleke O.B.O. (Omo Baba Olowo).

“Back When” was steady on repeat in the clubs, on the radio… on my laptop, and little did we know that the young starlet had an even bigger weapon in storage – “Dami Duro”. The guy who taught us the “drumming” dance and has influenced a lot of musicians to say “On the beat!” at the beginning of their songs, then dropped “Dami Duro”. And, it hit the airwaves like an atomic bomb during that #OccupyNigeria movement and everybody in the immediate radius (Nigeria) was affected by the blast, which quickly spread (permit me to say -) worldwide

But, that wasn’t all he had in store, from his tireless worldwide touring to clean cut videos of his singles; from the dropping of “Ekuro” and “Overseas” to the leaking online of “No Visa” and “Enter The Centre”; from regular documentary footage of his exploits to signing major endorsement deals; Davido has gone a long way from “Back When” to his debut album “Omo Baba Olowo: The Genesis”.

Finally, one of the most anticipated albums of the year is out (get a copy now at your local vendor) and as his album launch is on Sunday, 22nd July, 2012, as usual, Davido is the talk of the town. Here’s the official track list: 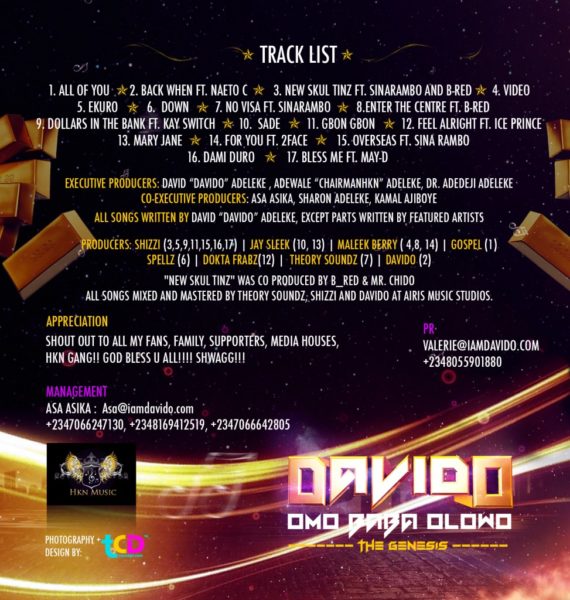 I’ve already copped my copy of album and decided to give y’all a little sneak peak at what he’s got in store. The album’s track listing is quite impressive as well, as the song arrangement follows a theme – a journey from “Back when [he] was broke…” to him asking you not to stop him (he’s just getting started), singing “E ma dami duro”. And, as expected, the album delivers a series of catchy, melody-bending Afro Pop tunes with splendid production.

Check on it and go get your copy now!

Listen to Davido Feat. 2Face Idibia – For You
[audio: https://www.bellanaija.com/wp-content/uploads/2012/07/For-You.mp3]

Related Topics:DavidoNaeto C
Up Next