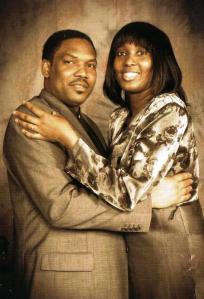 Following what can be described as one of the most publicized court cases involving a Nigerian couple in the UK on charges of child abuse, Nigerian parents, Joseph and Gloria Musa have each been sentenced to seven years in jail.

Their ordeal gained media frenzy since April 2010 when their five children were taken away from their custody on grounds of child abuse. They were accused of claiming that their six children were possessed by evil spirits and beating them with brooms, vacuum cleaners and wires. They were also accused of giving their baby a morphine overdose just days after her first birthday.

According to Telegraph, the children were taken away from their parents after their nine year-old daughter threw a heart-wrenching SOS note out of a window in April 2010. The reported content of the note read:

“My mum is the worst mum ever because she can’t cope with five of us, her broken hand and being pregnant. She always leaves me out so I always starve and I am forced to work. If I don’t get enough house work done, I am beaten without mercy with the wooden end of a broom. I have scars all over me to prove it. I can’t stay here. I would like a new mum.”

The note was found by a neighbour who called the police.

Gloria Musa who was pregnant at that time had her newborn taken away from her after delivery at the hospital on June 12, 2010. According to a report published in Vanguard, she described her the experience of having nine policemen invading the hospital to seize the baby as “bizarre, unthinkable and worrisome“.

She went on to say that they applied force on her as she tried to hang on to her baby and bruised her as they over powered her and took her baby.

The action which generated ripples both in Nigeria and the UK attracted the attention of the House of Representatives who described what the Musas were going through as the height of inhumanity. They stepped into the matter and called on the British government to ensure that the Musas are re-united with their kids until evidence shows any wrong doing on the part of the couple.

The baby was later returned to her mother after she failed to thrive in care.

In a Press Release published by the Arise Nigeria Legal Department on their website at the start of the hearing of the case, it said that some false allegations were meted out on the Nigerian couple. The Press Release claimed that Haringey Council accused Gloria Musa of being a sex worker and being mentally and physically unable to cater for her children, all of which it claimed to be false. It also claimed that the court deliberately tried to delay the release of the DNA test which proved that Joseph Musa is indeed the father of the six children and has prohibited the testing of the letter which was allegedly written by their daughter by a hand writing expert.

On the part of the Haringey Council, they say that after their daughter dropped the letter from the window, police officers went to their house and found the children living in messy conditions with “dirty” and “dishevelled” clothing. The UK Telegraph writes;

The eldest daughter had revealing scars on her body and said her mother had hit her with a cable, a broom, and a hoover and her father had dangled her by her feet down the stairwell of the house, tied her hands behind her back and her legs together “to get the devilish spirits out”.

Her sister, who was seven at the time, had a stick shaped bruise of her thigh and after a few months in care, she drew a series of pictures showing her dad beating her and her being left home alone and including a speech bubble saying ‘I’m hungry.’

The children were left home alone for hours, sometimes days on end, with the elder kids forced to look after the others.

They had even been forced to lie to a charity and social services that they were living alone with their mother in one room and had no idea who their dad was so they could scam benefits.

Star actress Michelle Collins of Coronation Street, who met the children at a church lunch and said they looked so neglected that she took them to a cinema “because she felt sorry for them” also testified at the hearing.

Some parties who spoke on behalf of the Musa’s described their ordeal as a violation of their human rights and one of the worst cases of child snatching.

As they left the court yesterday, they wailed: “We are innocent, this is a miscarriage of justice“. The couple face deportation to Nigeria once they have served their sentences.

This family’s ordeal has created a buzz online and in the Nigerian community, UK ever since it broke out. With their sentencing, many are still on the side of the couple saying their children were unjustly taken away from them and the sentence was unfair.

We only hope they get justice if they have indeed been wrongly accused.