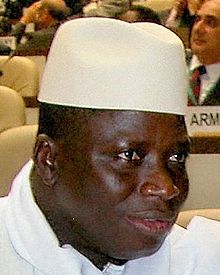 For many years, scientists and researchers across the world have been trying to find a cure for one of the world’s deadliest virus, the Human Immunodeficiency Virus (HIV). Although these scientists say there is yet no cure for HIV and AIDS, traditional medicine practitioners have made several claims to finding the cure.

One of them who is generating some buzz on the international scene is the Gambian President, Yahya Jammeh.

He claims to have cured 68 patients who had HIV/AIDS in varying degrees using his secret concoction of boiled herbs. In 2007, he first announced that he had found a natural remedy to cure AIDS, stirring anger among Western medical experts who claimed he was giving false hope to the sick.

His supposed cure has not been endorsed by the World Health Organisation and the United Nations. Rather, they have  have said his treatment is alarming mainly because patients are required to cease their anti-retroviral drugs which makes them more prone to infection.

But the president said recently that he has cured the seventh batch of HIV/AIDS patients undergoing his herbal remedy   since the treatments began five years ago.

Reuters reports that he said he wasn’t expecting people to praise him in a television broadcast:  “Who am I to expect that everybody would praise me. Just as the Prophet Mohammed prevailed and established Islam (…)I also prevailed to cure HIV/AIDS to the point that 68 are being discharged today,” he said.

I remember reading a similar article some weeks ago where HIV patients were warned not to stop using their anti-retroviral drugs while trying out such medicines by people who claim to have found a cure. However, it might be understandable that in the face of despair, when hope of a cure is presented to a patient, they tend to push away their trust in scientific medicine and try out the herbs.

The Gambian President is not the first person claiming to have found the cure for HIV/AIDS through traditional medicine. However, no respected worldwide health organisation like the WHO has endorsed any of such traditional cures, and so, their claims remain shrouded in mystery as the scientists continue to search for a cure that the world would accept.

Related Topics:AIDSGambiaHIVYahya Jammeh
Up Next