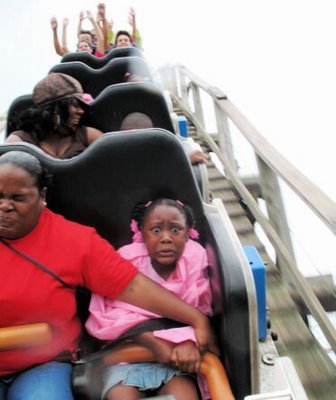 This morning, I found myself taking stock of the holidays and all the activities that made the last two weeks completely enjoyable.

I had attended a party for a 5 year old boy and the place was nicely decorated with lots of party baubles and balloons but the birthday boy had a deathly fear of the balloons. He absolutely refused to go near any of the balloons. I quietly watched the child as he eyed the colourful air-filled rubber orbs. You could tell that he was curious about them but every time one of them burst with a loud pop. Someone had noticed his fascination with them and ever so often would prick one of the balloons causing the noise to send the child running for safety.

I asked my friend if she had noticed the boy’s fear of  balloons and she responded that she had, commenting that the balloons were less frightening than the clowns and those TellyTubbies  costume things that people bring to “entertain” at children’s parties.

“Those things are scary na! Almost as scary as flying cockroaches!”

This was Folabi, who had at this point joined the group of observers! His wife chipped in that her husband had a deathly fear of cockroaches and the flying ones scared him the most. Then, we all started to say what we feared the most. From creepy crawlies, to flying, to missing the rapture, to becoming like one’s mother.(Yeah! Nengi’s special!) we established that we all had that one thing that scared us beyond comprehension.  I asked around when I left the party “What do you have a deathly fear of?” and I got an interesting suite of responses – “I constantly worry that I wont end up being fulfilled and I sometimes break out in sweat thinking about it”, “I have a fear of rejection”, “the thought that my girlfriend will one day tell me that she’s pregnant scares me”, “I’m terrified of dogs”, “tall buildings…. make me look out of the window of a tall building and you’ve killed me”. I could relate with that last bit.

It reminded me of what I’d always term as the most terrifying moment of my life.  Some years ago, my friends and I decided to go to Alton Towers, (a theme park in the United Kingdom). On that day, I never thought I had a real fear of heights. I mean, I’d been on other rides and I wasn’t scared;  at best, I thought it was more of an exhiliarating feeling than fear.

Dearly beloved! All this changed on the day at Alton Towers when I faced a ride called “Oblivion”. Brothers and sisters, I knew what was called FEAR that day. As we strapped ourselves into the seats, I was feeling like a “Bad Guy”, I mean, I’d been on other rides that my friends had said was scary and I’d come out with my blood pumping saying “Bring It On, Alton Towers. Is this the best y’all have got?”  Suffice to say, that when this Oblivion monster started taking us up, I began to confess my sins, committed, uncommitted, and even the ones that I may have been planning. Long story short, I’m so scared of heights now that even the thought of driving on that bridge from Jibowu into Yaba scares me like crazy! I had used my money to acquire a phobia for heights.

Anyway, let me leave you guys to get about your business for the day. Have a great week ahead, find a reason to keep a smile on your face and remember to give someone else a reason to smile.

Don’t forget to share your greatest fear, how it was birthed and let us know if you have a handle on it.