BN Weddings Hot Topic: If Your Husband Slaps You A Few Weeks After The Wedding - Will You Stay Or Leave?

Happy Sallah! Hope you’re enjoying with your loved ones! Today we’ll like to ask you a serious question – one that happens often, but it often swept under the rug.

“If your husband slaps you a few weeks after the wedding, will you stay or leave?”

What’s the origin of this question, you might ask? Well occasionally on BN Weddings Twitter, Instagram and Facebook, we like to throw out questions to see how our readers feel about different wedding/marriage issues and fun stuff. Some of the questions we’ve asked include – “Do you think brides look more beautiful on their traditional wedding?” (most people answered Yes!) “Would you let your MUA (make up artist) post a “Before” picture of your makeup-free face online? (mixed responses)!

Today Ebuka Obi-Uchendu of Big Brother Nigeria fame, put out the following tweet, our main handle @bellanaija responded, then it inspired our below tweet: 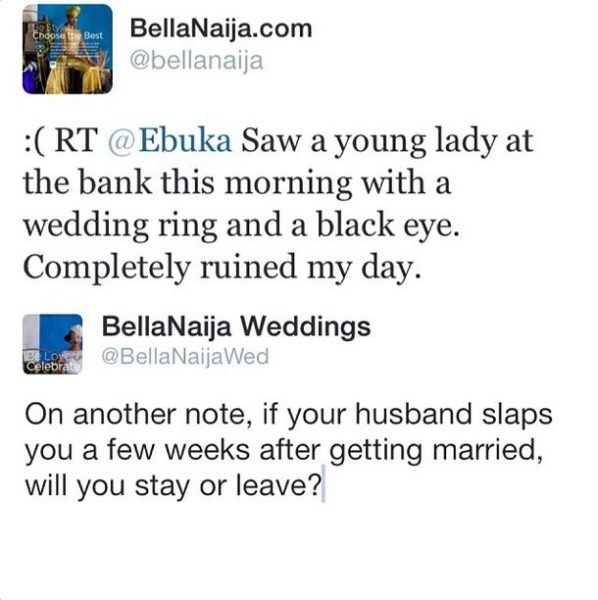 I also shared these stories (read from bottom to top): 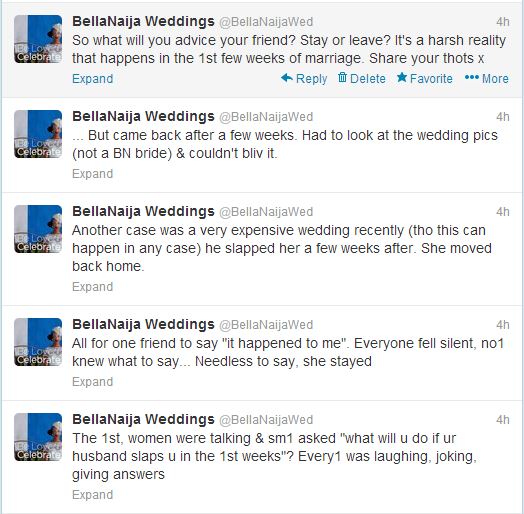 Even though we’re not assuming the black eye was from her husband, we thought it’s a great jump start to a discussion many people sweep under the rug. It has happened, it happens and will continue happening.

Most people on our Twitter have responded that they will stay and pray, while most on Instagram have said they will leave.

Please share your thoughts and experiences, it may help others. If you want to join in on the discussion on social media, the debate is still going strong.

Munachi Abii’s Style at the 2013 Ghana Fashion & Design Week in Accra: Which is Your Favourite Look?

BN Exclusive: All the Must See Arrival & Inside Photos from the 2013 Nollywood Movies Awards in Lagos