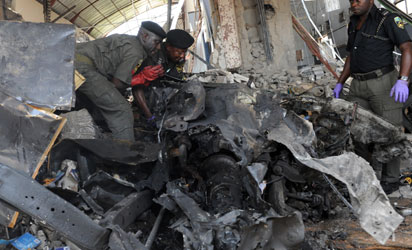 Just days after two bombs exploded at a Jos market killing 118, another bomb blast has occurred in Jos yet again, killing 3 people.

“He died in the wake of the heinous crime. He was consumed by his IED. It exploded before the viewing centre because of pressure from local youths and the alertness of the local people,” he said.

Bauchi Road is a predominantly Muslim area in Jos.

What is the Fate of Nigerian Child Bride who Killed her Husband?

David Mark on Boko Haram: “We will not negotiate with criminals”