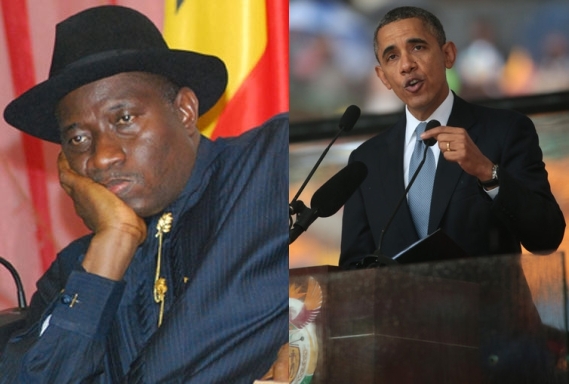 CONFIRMED! The United States of America will help Nigeria in finding the 200+ Chibok girls abducted by Boko Haram.

This comes hours after BN reported that US is in talks to send the FBI – read it here.

President Goodluck Jonathan has welcomed and accepted help. A team of experts will be sent to help as soon as possible. 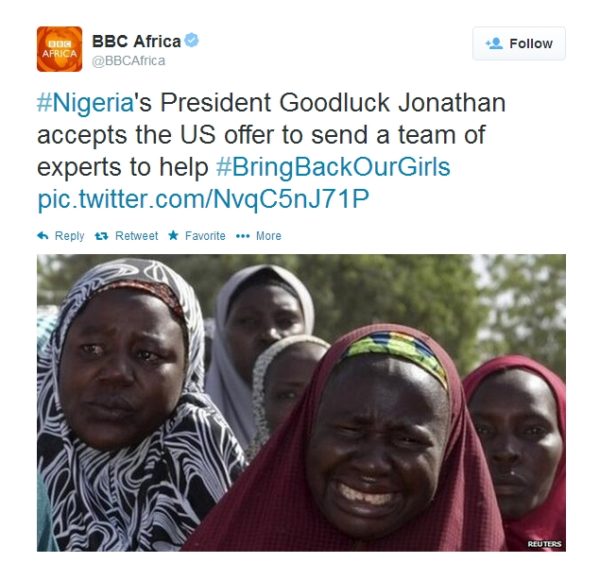 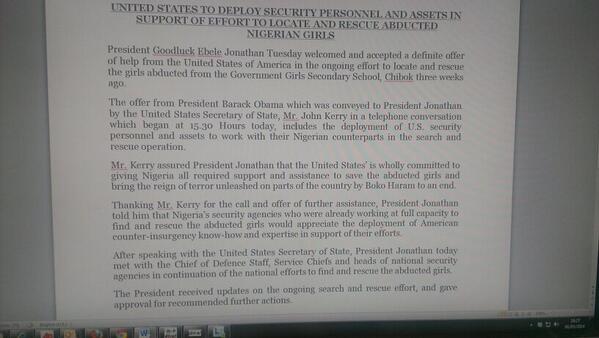 BBC Africa tweeted an official letter confirming the story, but later took it down. The letter states how the deployment was arranged and plans.

Read it;
President Goodluck Ebele Jonathan Tuesday welcomed and accepted a definite offer of help from the United States of America in the ongoing effort to locate and rescue the girls abducted from the Government Girls Secondary School, Chibok, three weeks ago.

The offer from President Barack Obama which was conveyed to President Jonathan by the United States Secretary of State, Mr. John Kerry in a telephone conversation which began at 15:30 Hours today, included the deployment of U.S. security personnel and assets to work with their Nigerian counterparts in the search and rescue operation.

Mr. Kerry assured President Jonathan that the United States’ is wholly committed to giving Nigeria all required support and assistance to save the abducted girls and begin the reign of terror unleashed on parts of the country by Boko Haram to an end.

Thanking Mr. Kerry for the call and offer of further assistance, President Jonathan told him that Nigeria’s security agencies who were already working at full capacity to find and rescue the abducted girls would appreciate the deployment of American counter-insurgency know-how and expertise in support of their efforts.

After speaking with the United States Secretary of State, President Jonathan today met with the Chief of Defence Staff, Service Chiefs and heads of national security agencies in continuation of the national efforts to find and rescue the abducted girls.

The President received updates on the ongoing search and rescue effort and gave approval for recommended further actions.

Watch a press conference which took place a few hours ago