BellaNaija is pleased to announce a new column for our special readers – ‘Ask Dr. Craig!‘ Dr. Craig is a BellaNaija columnist and one of the doctors who writes for BN Doctors’ Lounge {Get familiar here}. The idea behind ‘Ask Dr. Craig!’ is for BN readers to get quick sharp answers to niggling medical issues that they have. This does not in anyway mean that readers should not go to their doctors. However, sometimes you just need a human face to give answers to those fast, burning medical concerns our readers have.

Send your questions for Dr. Craig to features(at)bellanaija(dot)com stating your full name and where you are writing from. (Your name will never be published) The editor reserves the right to edit submissions for content brevity and clarity. We regret that we cannot provide individual answers to questions sent in and cannot state at which exact date answers would be published.
We hope that people will find help by reading and sharing. We look forward to reading your emails and tweets with questions for Dr. Craig.

I am 22 years old and I am in my final year at the University of Ibadan.I started my period at the age of 14 and was one of the lucky ones in boarding school who rarely had period pains. However, over the last 3 years I began to have serious menstrual pains, so serious that it feels like I am about to die.

I have tried different remedies and suggestions – avoid sugar a week before my period, drink less water before/during my period, use a hot water bottle etc. But I still feel terrible cramps that leave me unable to do anything during the 3 heaviest days of each period.

It’s gotten so bad that I have been to see several doctors, many of whom just waved me off and said it was normal and that I should toughen up. A few weeks ago during one of the most excruciating episodes I’ve ever had, I went to see a gynaecologist in UCH who has now confirmed that I have a condition called Endometriosis and something that sounded like “cold tummy”. She said I may need to have an operation and I’m really very scared.

I’ve tried to read up on both conditions on Google but I get more confused and scared. Please help!!!

I’m really sorry to hear about your recent diagnosis and the pain that you have had to endure.

I will try and explain as simply as I can what is going on in your body and hope that you will be able to understand exactly what’s happening to you.

Every part of the female reproductive system is purpose built and designed to perform a specific role in the reproductive process. The ovaries produce eggs for fertilization, the fallopian tubes are the courier service that transports the eggs, the vagina is the collector of the partner’s sperm and the womb or uterus is the incubator. Every part of this well oiled machine works together to ensure that reproduction is carried out in seamless efficiency.

The uterus as we said is the incubator of the reproductive system and its function is to provide a soft and plush cocoon for the fertilized egg to grow. The lining of the womb is made up of a special tissue called the endometrium which acts as a sort of thick blanket where the fertilized egg is nourished and fed.

When the egg is released from the ovaries on the 14th day of a woman’s cycle, the body sends a message to the womb lining (endometrium) to begin to prepare for the possibility that the egg will be fertilized. This message is in form of a spike in the female sex hormone progesterone, which signals to the endometrium to set things in motion. These endometrial cells are especially sensitive to progesterone and over the next few weeks the lining of the womb begins to thicken and fills with blood as it lays out the red carpet and fluffs up the pillows, stocks up on fresh food and fruits and puts up a welcome banner in anticipation of the arrival of a very special guest. If by a certain point the egg is not fertilized, the body instructs the uterus to pull down the welcome banners, roll up the red carpet and put away the blankets. All of these have to be discarded and they find their way out of the body through the vagina. The resulting flow of blood containing clumps of endometrial lining is what we know as menstruation and this happens every month as long as a woman is not pregnant, until she reaches menopause.

In some women, endometrial tissue somehow finds its way outside the womb and into the abdominal or pelvic cavities. These bits of tissue, even though they are no longer in the uterus (womb), still maintain their incubatory function, and so every month when the eggs are being released and the hormonal signal is sent out to prepare for implantation, these patches begin to swell and thicken and fill with blood in preparation, just like they would if they were still in the uterus. When the egg is not fertilised, the endometrium in the womb easily sheds its lining through the vagina, but the patches outside the womb have nowhere to shed their linings as there is no point of exit. As a result these islands of endometrial tissue fill up with blood and form intensely painful sacs of fluid that can often rupture and cause even more pain.
This presence of ‘trapped’ endometrial tissue outside the womb is called Endometriosis 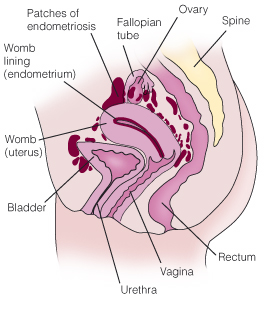 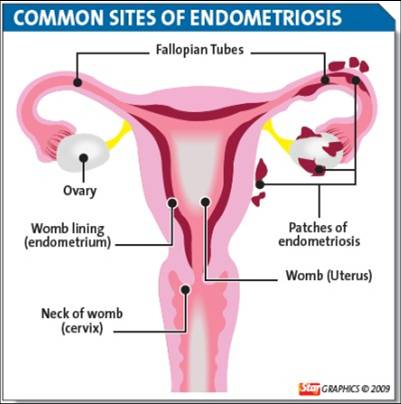 Scientists are not quite sure what exactly causes endometrial tissue to spill outside the uterus, but it is thought that a process called retrograde menstruation accounts for most cases of endometriosis. Retrograde menstruation occurs when menstrual blood and endometrial tissue flow upwards and inward through the fallopian tubes into the pelvic cavity instead of downwards and outwards through the vagina outside the body. There are many theories about what causes retrograde menstruation. Some suggest that activities like prolonged upside down yoga poses or vigorous sexual intercourse during a woman’s period may cause menstrual blood to spill out of the fallopian tubes into the peritoneum. None of these theories have however been proven. 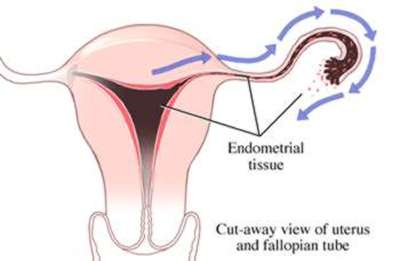 The condition you described as “cold tummy” is actually called Frozen Pelvis.

The fluid filled cysts that form in the pelvic cavity are called ‘chocolate cysts’ because the blood trapped in them can go brown and sticky and looks like chocolate. When these burst, they trigger a severe inflammatory reaction that cause very painful bruises in the inner lining of the lower abdomen or pelvis. These bruises heal by forming scars and these scars can cause the once freely mobile organs in the pelvis to become stuck to the walls and to each other and become fixed and rigid. Sometimes these scars (known as adhesions) can entrap an organ and restrict its blood supply causing even further pain. This rigidity is known as a frozen pelvis and sometimes, as is in your case, the doctor may determine that it would be beneficial to perform an operation to help release the adhesions and improve blood supply to the organs.

MULTIPLE CHOCOLATE CYSYTS IN THE OVARY 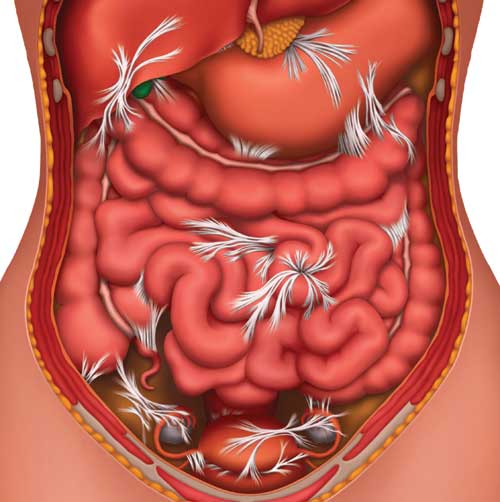 ABDOMINAL AND PELVIC ADHESIONS
The common symptoms of endometriosis include; Painful periods, painful sex, pain in the lower abdomen and pelvic area and other menstrual symptoms like bleeding in between periods.

Some patients may have difficulty becoming pregnant and this may be due to clumps of endometriosis blocking the passage of the egg from an ovary to the fallopian tube. Sometimes however, the reason for reduced fertility is not clear.

Uncommon symptoms include pain on passing poo (faeces), pain in the lower tummy (abdomen) when you pass urine, and, very rarely, blood in the urine or faeces. Very rarely, patches of endometriosis occur in other sites of the body. This can cause unusual pains in parts of the body that occur at the same time as period pains.

Treatment consists mainly of pain medication and some patients report that paracetamol taken during periods may be all that is needed if symptoms are mild.

Anti-inflammatory painkillers such as ibuprofen, diclofenac, or naproxen, may be better than paracetamol for moderate cases but since these can cause a condition known as NSAID induced gastritis they should only be taken under physician supervision.

In severe cases, a hormone modifiying drug is also given to prevent flare ups.

Please discuss these options with your doctor to determine which in their opinion would be most suitable for you.

Endometriosis is not as uncommon as one may think, and it is reported than 1 in every 10 women has the disease, but because most of these women will have only mild symptoms the condition is often undiagnosed. Endometriosis currently has no known medical cure and so it is important to have a strong support system to hand. A supportive partner or friends and family in addition to internet support groups are very beneficial to making the condition bearable for those with the disease.

Did you know? The former beauty queen and style icon Nike Oshinowo has endometriosis too and is the most prominent Nigerian personality to openly discuss her battle with the condition.

I wish you all the very best and pray that you will get better and be completely symptom free very soon.

***Disclaimer: This column is written for patient education. It is not intended to diagnose or prescribe treatment and does not replace the advice of your physician. It in no means attempts to cover the full medical scope of this condition.

Odera Okakpu: Not That Kind of Girl