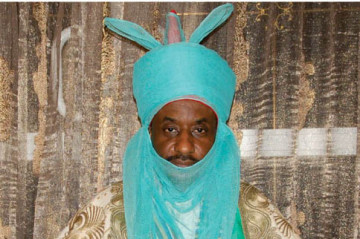 KANO (NAN) The Emir of Kano, Alhaji Muhammadu Sanusi, on Saturday paid N3 million at the Central Prisons, Kano, to secure freedom for 11 inmates of the prison.

This is contained in a statement the Media Officer at the Emir’s palace, Alhaji Sha’aban Ibrahim, on Sunday in Kano.

The statement said that the amount was fines option given the inmates by the courts at the time of their convictions.

It explained that the monarch secured the release of the inmates on humanitarian grounds, “due to either ill health or old age.”

The statement quoted the emir as urging the beneficiaries of the gesture to be of good conduct when they resumed public life and avoid issues that would take them back to prison.

Meanwhile, the emir has urged Muslims in the state to imbibe the spirit of tolerance and sacrifice.

The emir made the call on Sunday while addressing Muslims after the Eid-El-Fitr prayer at the Kofar Mata ground in Kano.

He appealed to them to emulate Prophet Muhammed’s life, stressing that the one month fasting should be seen as a period of cleansing and atonement.

“After the Ramadan, we should be more determined to live in the path of Allah as true believers.

“We should also continue to emulate the exemplary attributes of Islam which are love, tolerance and peaceful co-existence, he said.

The monarch also called on the people to continue to pray for peace, unity and progress of the state and the country.

Earlier in his sermon, the Sanusi, who led the prayer, stressed the need for Muslims to fear God and continue to use all the lessons of the Ramadan to foster unity in the state and country.

This is How Gov. Rochas Okorocha Keeps Fit