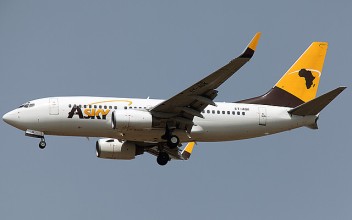 IKEJA (NAN) ― Nigerian Civil Aviation Authority (NCAA) has suspended all ASky Airline flight operations to Nigeria over the transportation of an Ebola virus victim into the country.

Benedict Adeyileka, the Acting Director-General of NCAA, announced the decision in a statement issued by the General Manager, Public Communications of NCAA, Mr Fan Ndubuoke, in Lagos on Monday.

He said that the regulatory authority had to take the action to protect Nigerians from the deadly Ebola virus, currently ravaging some parts of Africa.

The News agency of Nigeria reports that ASky Airline is an important player in   East, West and Central Africa, operating 80 flights into Lagos and Abuja weekly.

The airline flew a Liberian  infected with Ebola virus into Lagos, where he died.

Adeyileka said the Country Manager of  ASky had been invited to  explain issues relating to the trip but that he could not offer any conclusive or substantial evidence on the matter.

He  said that the airline manager did not demonstrate any capacity to be able to prevent a re-occurrence or possible transportation of Ebola victims into Nigeria.

“This is contrary to the provision of Article 14 of the Chicago Convention,1944, which states that `Each contracting State agrees to take effective measures to prevent the spread by means of air navigation, of cholera.

“Also of typhus (epidemic), smallpox, yellow fever, plague and such other communicable diseases as the contracting state shall from time to time decide to designate…..

“The International Civil Aviation Organisation (ICAO) has similarly prescribed measures (Standard Practices) in Annex 9 to the Convention which a state must take to prevent the spread of communicable disease in the event of an outbreak.

He noted that the lives of millions of Nigerians were too precious to be risked on the platter of negligence of an airline.

“The airline operations was therefore suspended with immediate effect until it is able to sufficiently and evidently prove that adequate machinery is in place to provide adequate screening of passengers in all their points of operation, including profiling of each passenger,” he said.

Adeyileka  directed the Directorate of Air Transport Regulation to proceed to write a letter of investigation to the airline.

He said that the agency would also write to other airlines operating into and out of Nigeria to ensure they put in place all necessary preventive measures during screening of passengers.

Adeyileka assured Nigerians that NCAA would coordinate the establishment of a Rapid Response Health Team at the International airports, being major ports of entry.

“This is to prevent the spread of the deadly Ebola virus in Nigeria according to International best practices.

“The authority will support all the relevant health authorities in the implementation of adequate health measures,” he said.

Similarly, Arik Air which had earlier suspended flights to Monrovia and Freetown has been advised to maintain the cessation of flights until cleared by NCAA.

Wife of Late Ebola Victim Speaks: Our 3 Daughters Will Never Know their Dad