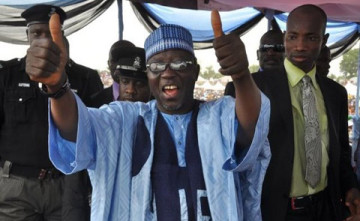 Lafia (NAN) ― The panel set up to investigate the 16 allegations of gross misconduct leveled against Gov. Umaru Al-Makura by the Nasarawa State House of Assembly on Tuesday dismissed the allegations for want of evidence.

The Chairman of the panel, Yusuf Usman, during the proceeding of the panel in Lafia, said the assembly failed or neglected to appear before it to prove its allegations.

He said the panel, therefore, had no choice than to dismiss the allegations.

Usman said the panel had, at the Monday sitting, given a grace of 24 hours to the House of Assembly to appear before it and substantiate its case.

He also drew attention to the appearance of counsel to the assembly, led by Mr Ocha Ulegede on Tuesday.

He said during the counsel’s appearance, it faulted the sitting of the panel on composition grounds.

Usman, therefore, said the refusal of the assembly to participate in the proceedings implied that it had failed to tender evidence to prove its case.

“The rule of natural justice and our criminal laws put the onus of proof on the complainant, and failure of which the accused is deemed innocent.

“The house has failed to advance evidence on the 16 allegations. The panel agrees with the prayer of the counsel to the governor.

“It has no option than to dismiss each and every of the charges against the governor,” Usman said.

He said the panel, in compliance with section 188, sub section 8 of the Constitution, would transmit its decision to the state House of Assembly.

Earlier, Ulegede had told the panel that he was appearing in protest on the grounds.

He argued that the state Chief Judge, Justice Suleiman Dikko, failed to comply with the provision of section 188 (5) of the 1999 Constitution as amended in raising the panel.

He contended that this contravened the constitutional provision on the subject matter.

He also said the guidelines used by the panel was wrong as the constitution provided that the rules of proceeding should come from the assembly.

“The panel has no power to have sat and even set rules.

“Their action was in breach of the constitution and panel should be disbanded on the ground of morality.”

He contended that members of the assembly would not participate in the panel’s proceedings until the constitutional breaches were addressed.

Reacting to the submission, Usman said the panel had no power to take decision on the issues raised by Ulegede, pointing out that such decisions could only be handled by the court.

Counsel to Gov. Umaru Al-Makura, Nnoruka Udechukwu, had prayed the panel to dismiss the allegations on the notice of impeachment in compliance with section 7 (c) of the panel guidelines.

Udechukwu noted that there was no proof and acknowledgement of service of the hearing notice on his client.

He, however, said that the refusal by the assembly to participate in the proceeding implied the abandonment of the allegation.

“Banning of Hijab in Nigeria is Unconstitutional” – NBA