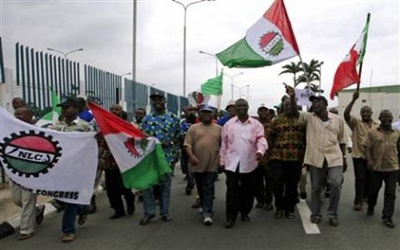 The Nigeria Labour Congress (NLC) has condemned the removal of wages from the exclusive list to the concurrent list by the National Assembly (NASS) in the ongoing fourth amendment exercise to the 1999 constitution.

This is contained in a statement signed by Peter Ozo-Eson, the Secretary General of the congress

According to the statement, “we at the congress see the removal of wages from the exclusive list as an act of treachery which will do the polity no good.’’

The congress said that it would mobilise its members to resist the move to scrap the National Minimum Wage.

“We recall that last year our national campaign and mobilisation on this subject matter was suspended at the instance of the leadership of the Senate.

“The Senate had promised to revisit the issue now that they are better informed.

“We also recall paying tribute to the House of Representatives, who in their wisdom did not contemplate removing wages from the exclusive list,” the statement said.

The congress stated that it would be worth recalling that the just concluded National Conference retained
wages on the exclusive list.

The statement said that this was in deference to the logic of the argument for the necessity of maintaining wages on the exclusive list.

“We have generated and circulated enough literature on this subject matter and we are completely at a loss as to the rationale for this turn-around.

“We advise the National Assembly to hearken to the voice of reason and the voice of the people by urgently retracing their steps because the consequences of their action could be dire for the nation.

“We have explained often that the basic rationale for the fixing of a minimum wage is to ensure that employees, particularly the unskilled, are not exploited by their employers.

“This is to an extent that their pay becomes so low that it creates a pool of the working poor,” the statement said.

The statement said that Minimum Wage Laws were in force in approximately 90 per cent of the countries of the world today.

It wondered why Nigeria would leave this group for the negative 10 per cent.

It said that one of the implications of the amendment was the jettisoning by the NASS of the concept of a national minimum wage as enshrined in the 1999 Constitution (Item 34 of the Second Schedule).

It said that what this meant was that every individual employer would determine its minimum wage.

The statement also said that this was extremely retrogressive and dangerous.

“The other implication is that it will turn the wage determination process in states into a “legislative” exercise.

“In light of the foregoing, the congress believes the removal is a deliberate and a calculated attempt
to move us from the working poor to the slave-poor.’’

It stated that NLC believed that it was a conscious ploy by some people to truncate the ongoing electioneering process.

It said that an emergency National Executive Council meeting had been convened for October 27th to mobilise workers for further action.

“We appeal to the Nigerian people to show understanding in the event of fall-outs from our proposed action,” the statement said.