Dem Mama records CEO, Timaya has been called out by a mystery woman (based in Atlanta) on Instagram.

According to her, Timaya raped her and begged for forgiveness while also threatening her.

She posted screenshots of conversations as well as voice recordings. Find them below.

*Please note the use of strong language in the screenshots. 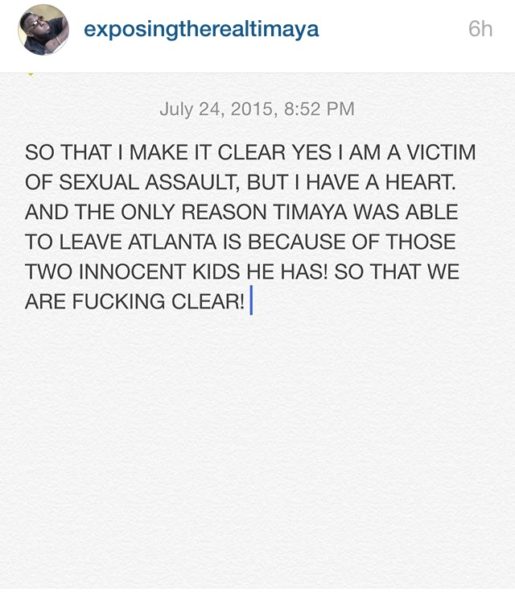 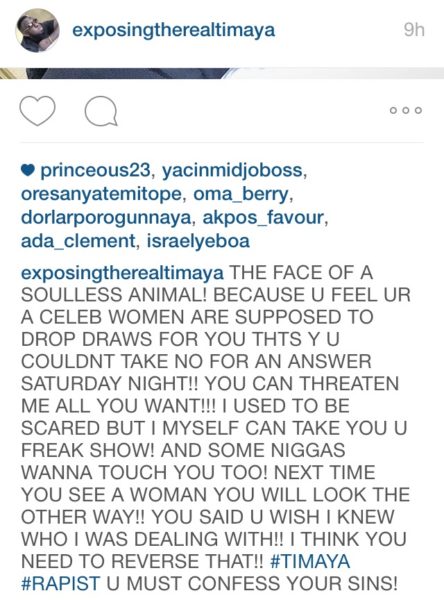 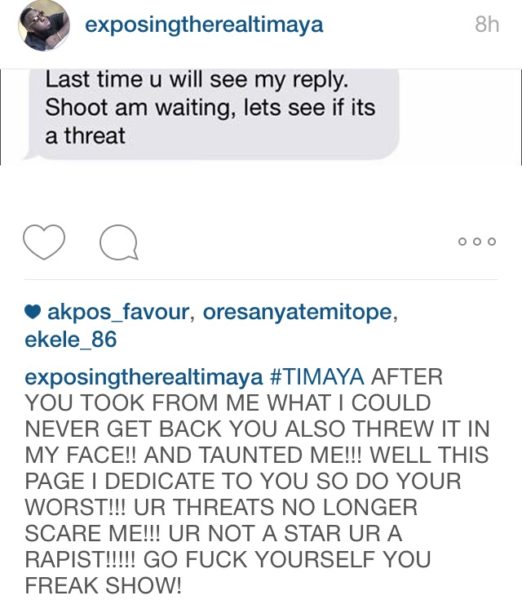 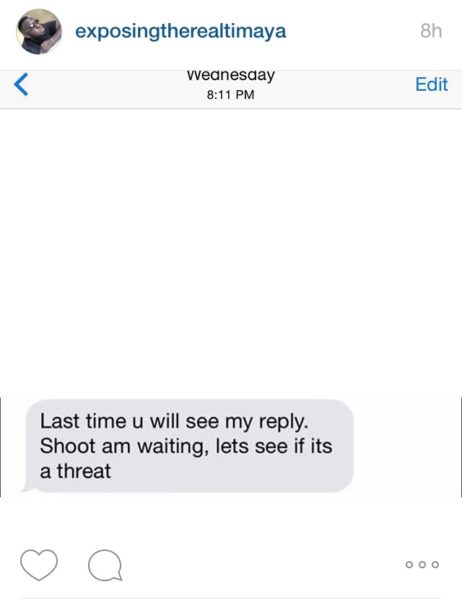 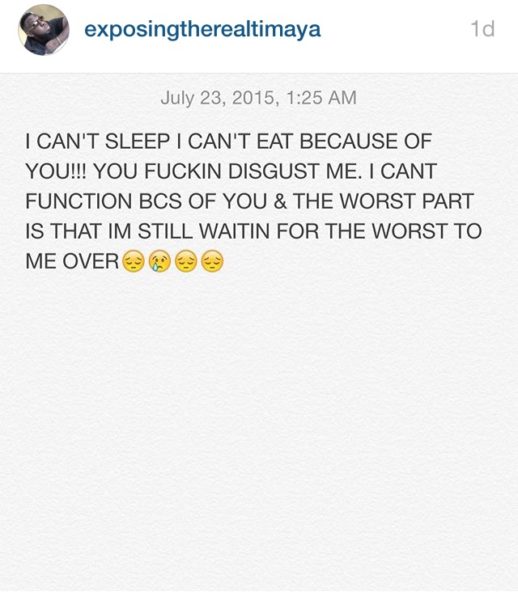 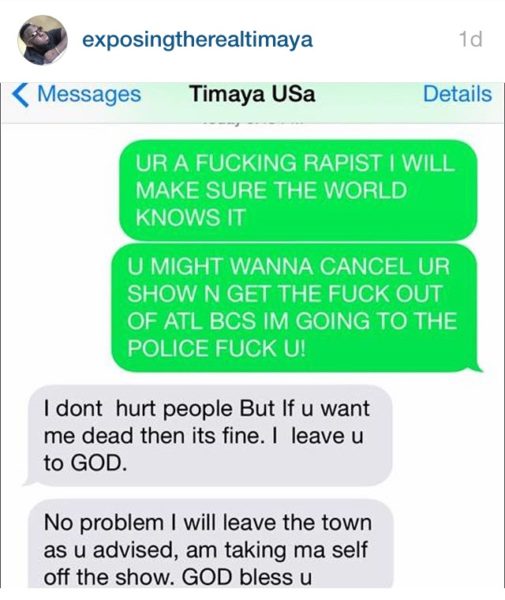 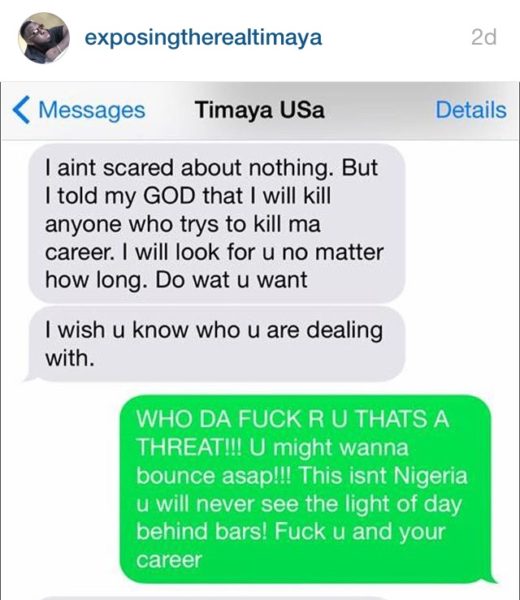 Listen to some of the voice recordings below.

TIMAYA YOU DO NOT DESERVE ANYTHING GOOD IN YOUR LIFE!!!!! WHAT GOES AROUND COMES AROUND!!! YOU CANNOT SHUT ME UP!!!! YOUR THREATS CAN NOT SILENCE ME!! THE WORLD NEEDS TO KNOW WHAT YOU DID! #nomeansno #icannotbeslient

#TIMAYA DA NERVE!!! GOD CAN NEVER ALLOW SUCH!! HE CAN NEVER LET ME DOWN THT WAY!! HE WILL NEVER ALLOW ME TO TAKE IN FOR A BEAST! NOBODY KNOWS HOW ANGRY I AM!!!! GOD FORBID I EVER HAVE A BABY BY MY ATTACKER!! #RAPIST #SICKO I MADE SURE I RECORDED THE CONVERSATIONS AFTERWARDS SO HE CAN NEVER DENY ANYTHING!!!!! THEN U HAVE THE GUTS TO SAY HOW CAN I DO THIS TO YOUR POTIENTIAL BABY FATHER??? wdf!! #iPITYTHOSEWHOEVERLOVEDU #SMH #nomeansno

THE LAUGH OF AN EVIL SOULLESS PERSON! IF SOMEONE CAN LOOK YOU IN THE EYES AND TAKE FROM YOU THEN THEY ARE CAPABLE OF KILLING! BUT #TIMAYA U DONT SCARE ME OK WHETHER HERE OR ANYWHERE! ANYTHING HAPPEN TO ME EVERYONE KNOWS ITS YOU! AND IF ANYTHING HAPPENS TO ME MY PLPS SAYS AN EYE FOR AN EYE A TOOTH FOR A TOOTH! YOUR STORY IS OUT! NOBODY GIVES A FUCK WHO YOU ARE!! WE ALL HAVE FAMILY! THE NASTY DEEDS YOU DONE HAS FINALLY BEEN EXPOSED. SO NOW YOU DO UR WORST. IM READY BUT AFTER ITS SAID AND DONE THAT COCKY NON REMORSEFUL DISGUSTING ATTITUDE OF YOURS WILL BE GONE, THEN I WILL ASK YOU DO YOU STILL LIKE ME #TIMAYA

PERSONALITY ISSUES!!!! ONE MIN U HUMBLE NEXT YOU GOING CRAZY THREATENING TO KILL ME. PLEASE SHUT DA FUCK UP #TIMAYA I DONT ACCEPT UR KNEEL DOWNS! APOLOGY NOT FUCKIN ACCEPTED U BEAST THIS IS NOT YOUR FIRST TIME!!! YOU JUST GOT EXPOSED TRYING ME WITH IT!!

We reached out to Timaya’s manager but their phones are currently switched off. Timaya’s manager, Prince also reacted to the allegations on Instagram. He sent the mystery woman an InstaDM saying legal actions will be taken as the voice recordings she has of Timaya were done illegally.

See his reaction below. 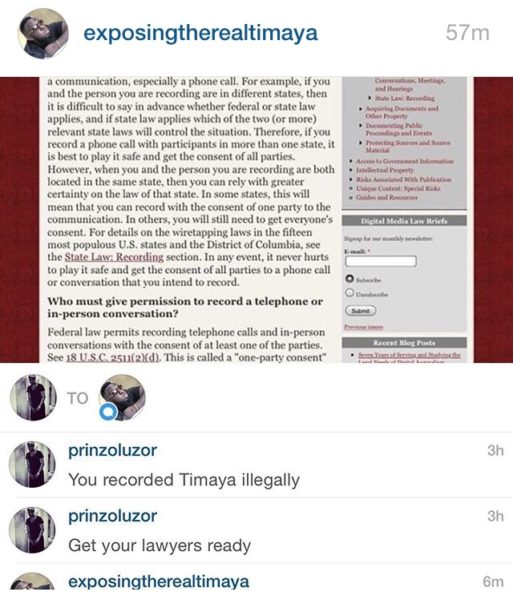 So far Timaya has not reacted directly to the allegations.