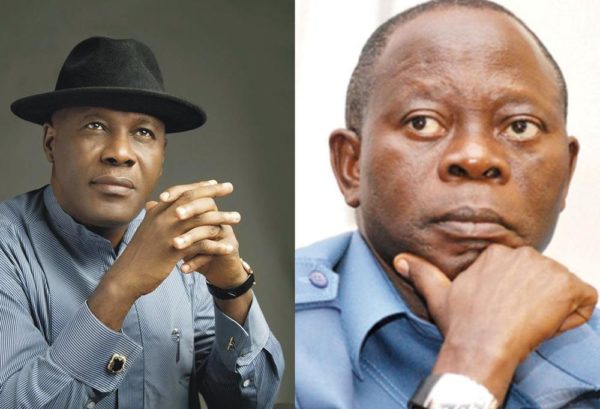 There is some serious beef going on between Edo State governor, Adams Oshiomhole and former Minister of the Niger Delta, Godsday Orubebe. As a result, both individuals have been exchanging insults.

The drama started on Tuesday, when Orubebe decribed Oshiomhole as a “villa sycophant,” stating that he is the kind of person willing to switch allegiance to whoever is in power at any point in time. He further expressed displeasure because Oshiomhole reportedly criticized former president Goodluck Jonathan, Premium Times reports.

In response, Oshiomhole, in a statement released by his spokesperson, Peter Okhiria, said:

Our attention has been drawn to the latest outburst of one clown called Godsday Orubebe in his attempt to taint the image of the Governor of Edo State, Comrade Adams Oshiomhole.

It is no surprise that the former president, Goodluck Jonathan, failed woefully because he surrounded himself with such charlatans as Godsday Orubebe, whose only credential is his ethnic origin and the large size of his bowler hat.

Does Orubebe really think Nigerians are fools, does he truly believe Nigerians have forgotten so soon the ignoble role he played in his attempt to truncate the release of the election results and announcement of the eventual winner of that election, a move which could have plunged the nation into another civil war?

Is it not a shame that Orubebe who should be cooling off his heel in jail for that failed plot to truncate democracy has now found a convoluted voice?

We are not surprised at the timing of Orubebe’s latest outburst. It is no doubt unconnected with the planned probe by President Muhammadu Buhari of the billions of naira allocated to the Ministry of Niger Delta Affairs, even as the East-West road remains in bad shape and the probe of the fleecing of amnesty funds under his watch.

We are aware that Orubebe, the perpetual noise maker, has raised the decibel of his noise a notch higher so that he would have a ready-made defence of witch-hunting if he is indicted in the planned probe of Amnesty funds.

Orubebe is a yesterday’s man. We could have chosen to ignore him like his Delta brother, Mr. Sunny Onuesoke, an unknown entity who doesn’t know the arithmetic of financing, but decided to delve into a matter of a World Bank loan, something completely beyond his mental and intellectual capacity, but we simply can’t let Orubebe have the last say.

We are not unaware that it has now become the fad for drowning and neophyte politicians to take cheap shots at the impeccable character of the Comrade Governor just to gain cheap publicity. However, Orubebe’s image, as he himself knows, is beyond redemption.

Our candid advice is for Orubebe, a perpetual failed governorship aspirant, to go to his family and apologise for the irreparable damage done to the family name with his infamous outburst beamed live to the whole world, before coming forward to confront Governor Adams Oshiomhole who is not in any way in the same class as him.

It is no wonder that Nigeria was at a state of near collapse until President Muhammadu Buhari came on a rescue mission and rendered people like Orubebe irrelevant.

Never again will characters like Orubebe take us on the path of Golgotha; never again will they hold sway in the affairs of Nigeria and ruin the collective aspiration of the people.

In response, Orubebe stated that Oshiomhole was suffering from “chronic diarrhea of the mouth,” Vanguard reports. Orubebe also said:

“I am proud to have been a vital instrument used by God to take the once abandoned East- West Road project to an admirable 80 per cent level of completion. It is unfortunate that our respected Niger Delta could produce the likes of Oshiomhole who is a garage boy that should be at the motor park…

I will disgrace him publicly and tell the world about his dubious deeds as governor as well as his role in the botched Third Term Bid of former President Olusegun Obasanjo.

I am going to open his can of worms to the point that Nigerians will stone him if seen on the streets. I don’t talk carelessly as I have my facts to prove my points.

I am not afraid of probe, I’m a man of integrity under whose watch the abandoned 42 bridges and 1040 culverts that were initially without design were upgraded to the level it is today.

Every reasonable Niger Deltan and Nigerians at large knows that I am the admired face of the East West Road, I can stand tall, anywhere and anytime to defend my administration as well as account for every dime that was allocated for the several projects we embarked upon.

My Co- ministers and every other person who was a member of the Federal Executive Council under former President Jonathan’s watch can attest to the fact that I was a vessel par excellence, who had result oriented contributed to make towards moving the nation forward.

If he is reasonable, he will not refer to my action at the election result collation centre.

This is because, history will talk about it and Nigerians will be proud of me. Yes, I had to apologise to Nigerians, particularly the youths over my I term ‘wrong approach to a just course’. Yes, I had a just case that was deliberately ignored, as one who felt cheated, and so reacted.

I’m laughing at him because, if there’s anyone who should burry his face in shame, it has to be Oshiomhole who disgraced, harassed and rough handled a poor widow who he should have ordinarily accommodated.

My people are very proud of me, I mean the aged, the poor and orphans. I don’t disgrace them before putting smiles on their faces. I maintain the fact that Oshiomhole is a popular villa sycophant, a garage boy and that PMB should be weary of him, if he must succeed and be really admired.”