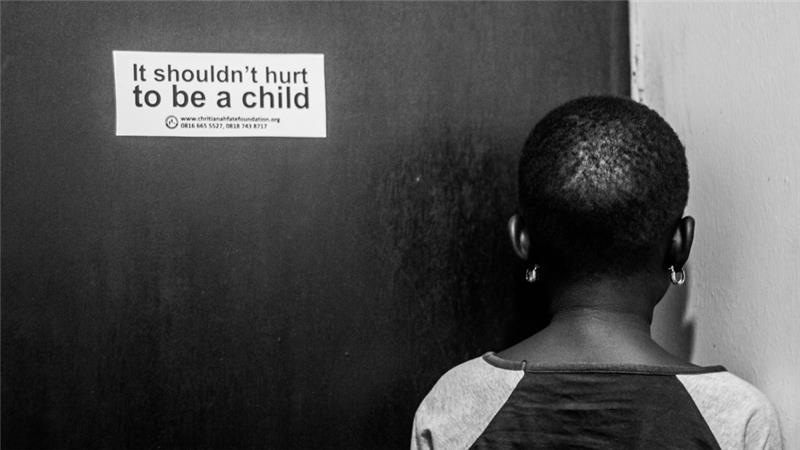 Dami is just nine years old. A neighbour is currently being held in prison, accused of raping her. [Logor Olumuyiwa Adeyemi/Al Jazeera]

On Tuesday, I had the opportunity to be at the launch of the Friends of Mirabel event organised by the Mirabel Centre. Established in 2013, The Mirabel Centre is the only rape support centre in Lagos. Since the centre opened its doors, they have welcomed 1074 rape survivors so far. The centre was largely unknown until a moving AlJazeera report about the challenges the centre was facing -one of which is closure due to a lack of funding- went viral. People were horrified to read about the experiences these children (mostly female but sometimes male) and women had been through and continue to go through.

Rape remains prevalent in our society and in the world. It is a crime which is still looked at as something that the victim should be ashamed of and worse, responsible for. We ask questions of our victims:

“What was she doing there?”

“How could she be out that late?”

“Why didn’t she scream?”

“What was she wearing?”

“She wanted it didn’t she?”

What we neglect to consider is that most people are raped by the people closest to them. They are not strangers lurking in the dark with evil grins waiting to pounce on women or girls who flash an ankle or wander into their patch at night. They live amongst us. They are brothers, neighbours, uncles, fathers, husbands, pastors.

In a 2013 NOI Poll, when respondents were asked an open ended question about the causes of rape, 34% responded “Indecent dressing”. People rape for many reasons, to wield power over women, to compensate for inadequacies. What a victim wears is usually far down the pole.

We recoil and gasp at these facts, but numbers do not lie. ‘Things are happening’ – as we are wont to say. I should not have to tell you that this could be your daughter, sister, niece, cousin, mother or grandmother. I should not have to drag children and women’s pain out into the light for you to understand that we have a problem of epidemic proportions. Numbers tell the truth but we have to put faces to them for us to understand that a four year old can be raped for a year and not have the words to tell her mother that she was being raped.

We must speak for that child and others. The silence, we must break it. We must. This silence that eats at the insides of survivors. Their silence is our silence. By not talking about rape. By couching rape in softer words like defilement or violation. By making rape their fault. We should want a society where it is safe for victims to speak out. 25% of Nigerian women would have suffered a form of sexual assault before they are 18. If four women should sit in a room together, it is highly likely that at least one has a burden. We are responsible for that.

Most rapes go unreported or the victims are threatened into silence. For those who seek justice through the legal system, it is a difficult road to travel. The wheels of justice turn very slowly in Nigeria. The four year old and her mother had to endure four years of relentless pursuit to get a conviction. Nigeria has recorded only 18 rape convictions in its legal history. Marital rape is still not a crime in Nigeria.

But what can we do in the face of such overwhelming trauma? Within our circle of influence, we can challenge the myths surrounding rape when they are presented. We should arm ourselves with facts and beliefs. To the person who says that some rape accusations are false and benefit of doubt should be given to the perpetrator, we say that 2% of rape accusations are false. When rape victims have the courage to speak up, believe them and do not dismiss them. The burden of proof should not lie with them. Rape should not be normalized in conversations. A football club cannot be ‘raped’.  We should raise our children to think about consent. No means no.

Wana Udobang’s report took us into the rooms of Mirabel and the lives of these survivors. We reached into our pockets to raise $12,000 for the centre, but this is insufficient. The centre needs more funding. They need a new premises, care for their counsellors who may suffer secondary trauma for the tireless work they do, a laboratory to run tests on survivors and much more. But the overriding message from Mirabel is that we need to speak out about rape.

A common question that rape survivors ask themselves is “What did I do?” They should not have to live with that question. The shame that they carry should be on the perpetrators of the crime. We should talk about the people who rape.

If you would like to support the centre, you can make a donation to:

To join the fight against this crippling and inhumane culture, you can volunteer to speak and educate people. Tell your stories, and you just might be saving a life. At the end of the day, we have to do a lot more than “hmming” and “ahhhing” from the comfort of our homes, if we want to effectively stamp out rape.

Esco: I Got It From My Mama & Papa

BellaNaijarian Remisola Writes Tribute to her Mother – “Woman of Virtue”