Esco: I Got It From My Mama & Papa 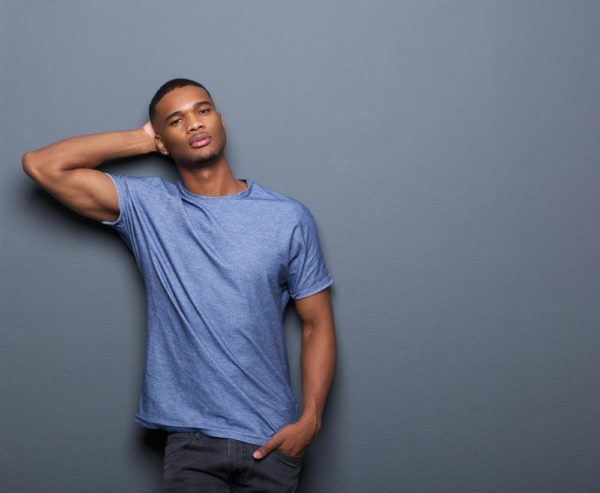 In the first years of my youth, I was told by certain insensitive adults that I would grow up to be a short man.  If that was not an oxymoron, I don’t know what is. Their reason for such crass talk? My mum is about 5 foot 5 inches tall, and my dad is shorter. My siblings were not tall either. Taking a family portrait, we all looked like Igbo Smurfs.

But sometimes genes and talents skip a generation – and certain traits and faults do too. On my father’s side of the family, the men tend to add weight easily around their torso.  My grandfather was a rolling stone, and I mean that quite literally. On my mum’s side, individuals are blessed with good frames and bone structure – cheek bones, proportional limbs and square shoulders. They are also very book-smart. However, baldness and receding hairlines are the flip side of their coin.

So in secondary school, when I hit my teenage years, many of the above traits from my mum and dad’s contrived to create a mish-mash of a messy pottage. The result would have made Frankenstein proud.

There I was, in the sullied whites of my secondary school uniform – large bellied with slim limbs, massive nose, a shortish height, a 90s Vanilla Ice high-top hair-cut and the early signs of widows peak. I had the dimples of life, but it was surrounded by teenage acne which became oils wells on contact. I was somewhat intelligent, but not academically brilliant.

And oh, did I mention that I wore glasses – a heritage of my father’s side. Big horn rimmed, coke-bottled spectacles which were always bent out of shape because I dozed off in them. I ended up tying them with a shoe string.

I could have developed a Napoleon complex. Luckily and co-incidentally I found creature comforts in other worldly pursuits like playing video games (especially Streetfighter 2 and ISS) hip-hop, and goofing around with my school click – The Pentagon Pound. In my day, you could not afford to wallow in your physical insecurities as you would be eaten for breakfast by banter throwers. I held up quite well.

Back then, there was no Skype, no hiding behind Blackberry or Whatsapp chats or social media. You had to go out there, and put yourself out there, or remain a crab in the hole forever. Get the wind behind your back, so to speak.

After I finished secondary school, I spent an involuntary gap year (imposed by JAMB and strikes) at home before I went off to University. To kill boredom, I ate everything moving. It drove my ma bonkers.

But then something else happened – I experienced a growth spurt like no other. It was like I looked in the mirror, and transformed from being a “short engine” to about 6 feet tall. My grandfather’s genes came through – he was a Goliath, as village champions come. Oh, and my forehead acne cleared.

So good times, and as Sean Carter rhymed, my situation could be summed as thus:

My gear is in and I’m in the in-crowd
And all the wavy light skinned girls are loving me now
My self-esteem went through the roof – man, I got my swag

As crazy family genes go, it appears that for every gift, there is a concession.

There is the famous Esco Family sheen – we appear to be blessed with a certain glow inherited from our progenitors who discovered the merits of cassava soap (I kid, I kid). My grandmother on my father’s side who was said to be a hot chick in her day centuries ago, aged very well. Even on my dad’s sickbed before he passed on, people who came to see him refused to accept that he had cancer. He looked relatively fresh till his final moments.

And because my pops had cancer, it is something I have to look out for. I will need to have my prostrates checked annually from age 40 onwards – an excruciating and very humbling  procedure.  I also have to keep an eye on my carbs and sugar intake to stave off diabetes – which used to be a family special in my maternal family tree. Heck, I even dropped my cigarette habit half a decade ago, and I have not had a St Moritz in years.

There is also artistic streak in my blood. Otaakara, my daughter, is already pretty handy with Crayola, and has a photographic memory that equals the motion grounds of OAU. I have always had a keen interest in calligraphy, content development and creativity. My mind works 24/7 . I am not able to sleep without dreaming.  Good for wet dreams – horrible for nightmares.

My old man was a super speech-writer and popular choice for chairman of events, as he was capable of captivating and moving an audience with his words. He also had a slick tongue that could mortally injure, if he reprimanded you. My cousin twice removed earns serious corn as a UK based photographer and videographer with a weekend DJ side gig. Another cousin is a super skilled musician, who unfortunately came up in the wrong era. Certain members of the extended family discouraged his pursuit of a music career, as back then everyone crassly wanted their children to study law, medicine, finance or engineering.

These days, I still have this huge girth to contend with. I suffer Nutty Professoritis, as my metabolism is all over the place. One week you could see me in my Buddy Love stance, then the next month I would have added 30 pounds and be plump like the Klumps. Wellness and health management for any gender is a lifelong campaign. Sometimes you lose 5 pounds, and gain 10, and vice versa. Fat can be like those demons described in the Bible; when you cast out one, if you backslide in faith, he returns back manifold. Well, at all, at all, na him bad pass.

I got sick of feeling like a deflated wheel in the streetcar called desire. I also discovered that sleep apnea is the cousin of death. So I started this 24 day cleanse program last month and have dropped over 10 pounds so far, and gained some major muscle. Check out more information here

The nature of genes is learning how to work with the hardware you are blessed with, and calibrate the supposed “bugs” by action and supplication. No seed of man has no choice over his parents, fore-bearers or constitution.

Trivia in closing: If a cockroach accidentally makes contact with a human being, it scurries away somewhere and cleans itself. Let that sink in for a bit.

Caught a glimpse of myself in the Barney’s shop window/
Kind of  see my father’s features creeping  in a little/
Got an office on Broadway, business in Jamaica/
Tell my daughter to  try the hardest so the best schools will take her/
Nas, War (2004)

#BN2015Epilogues: The Prodigal Daughter Who Returned Home Finds a Way to Still Smile