What Is D'Banj Doing? 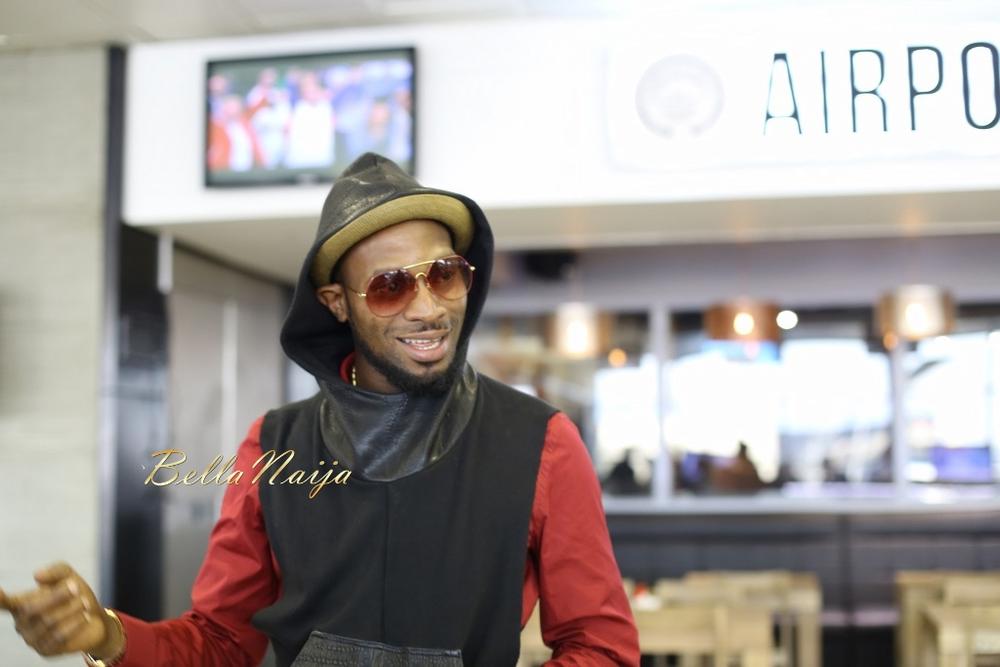 When a person is accused of rape, there are technically two ways the reaction to the accusation can go:  The first reaction (and often easiest for both the victim and the accused in terms of closure), is to admit that the alleged rape actually took place and then seek out ways of genuinely making amends to the victim. The second reaction is to deny the claims, and this too often leads to the accused threatening the victim with legal action.

A couple of weeks ago, music star D’banj was accused of rape. This resulted in a division of opinions – the people who believed the victim, and the people who were on the fence and needed more proof or more evidence or poked holes in the victim’s story or generally pledged allegiance to D’banj.

As of today, the 18th of June 2020, there isn’t that much of a division of opinions anymore. More and more people are using the same voice to ask one question – What is D’banj doing?

Here’s what D’banj has allegedly been doing.

A week after the allegations surfaced, and after celebrating his 40th birthday with a virtual concert, D’banj spoke out.

In his Instagram post which has now been deleted from his page (why?), D’banj wrote that the rape allegations are a slap to his marriage, his wife, and his entire family who believe in him. He also wrote that he did not want to dignify the slurs with a response.

He explained that the accusations had reopened the painful scars of the deep loss he feels over his late son.

Also important is that he stated in this response that the case has been handed over to his legal team (Mike Ozekhome’s Chambers) and the Nigerian Police to investigate the criminal aspect of the accusation. 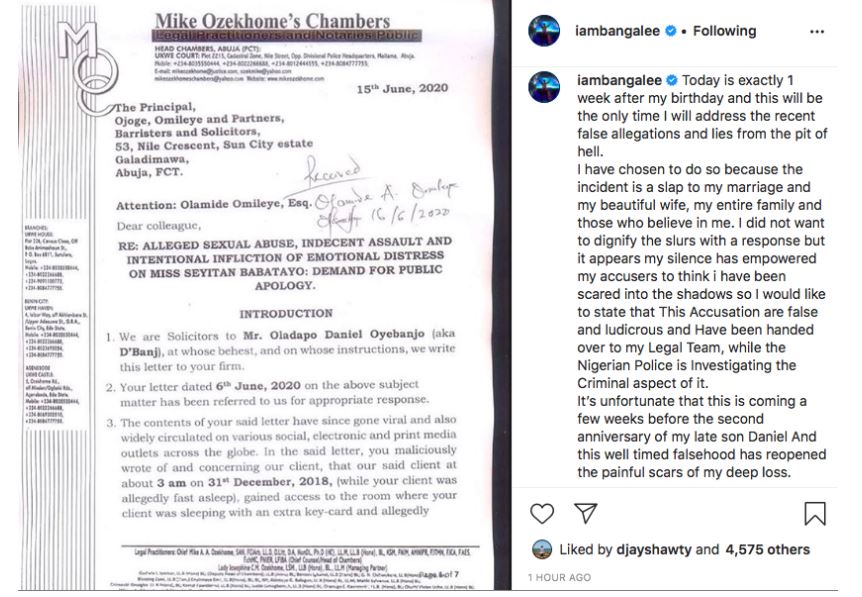 According to reports that surfaced yesterday on social media, Seyitan, who brought the allegations against D’banj, was arrested and denied access to friends, family, and legal representation. That is not okay.

There was a lot of outcry on social media with several activists demanding her release. And she was reportedly released from police custody after her illegal detention. Unfortunately, there are several reports that she was not released to go home but into the hands of D’banj’s management team where she was being intimidated to recant her allegations. 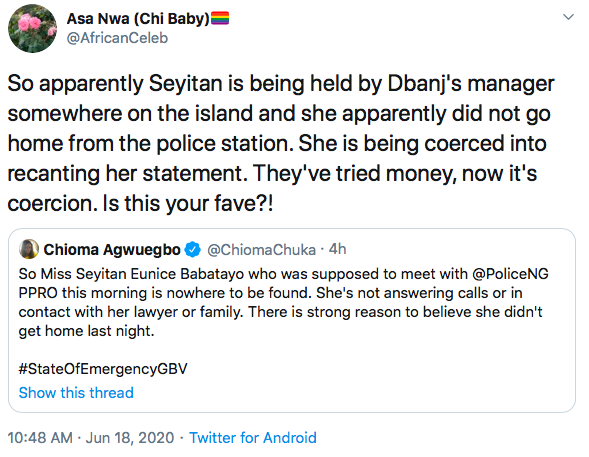 What is going on?

Amazingly, in 24 hours, women on Twitter raised over a million Naira for Seyitan’s legal fees to ensure she gets proper representation. Here is the donation link. 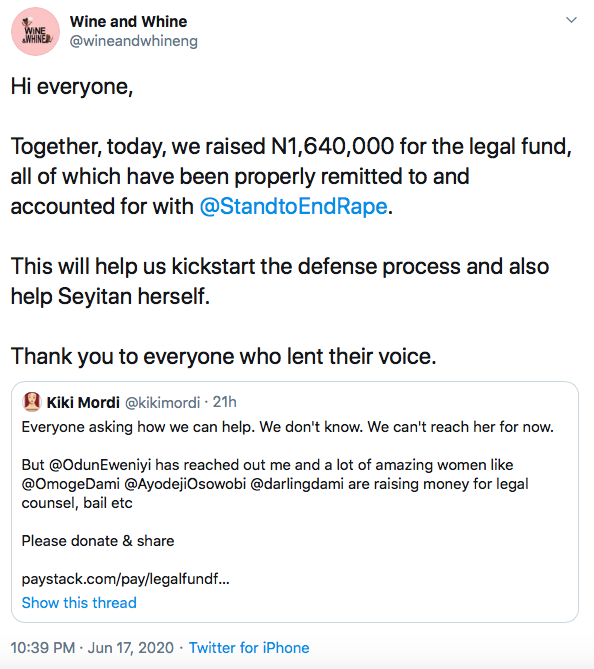 In addition, Seyitan’s Twitter page and the allegations that were made on there were deleted. To replace it, came a flurry of tweets that did not line up with the allegations previously made.

Then these tweets that seemingly promote a new soon-to-be-released song by D’banj. 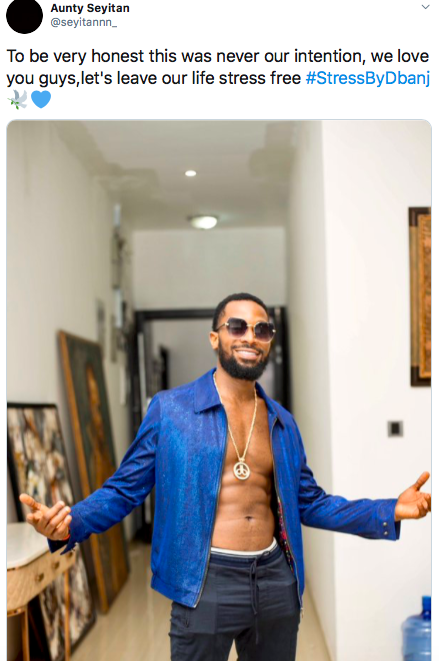 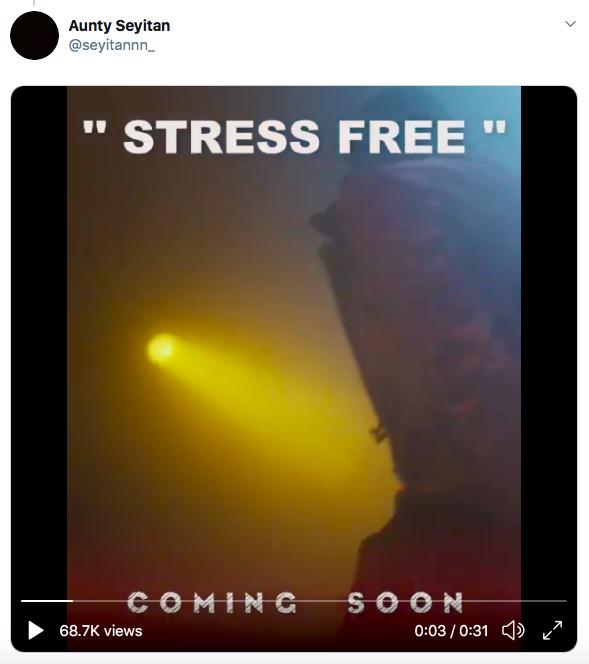 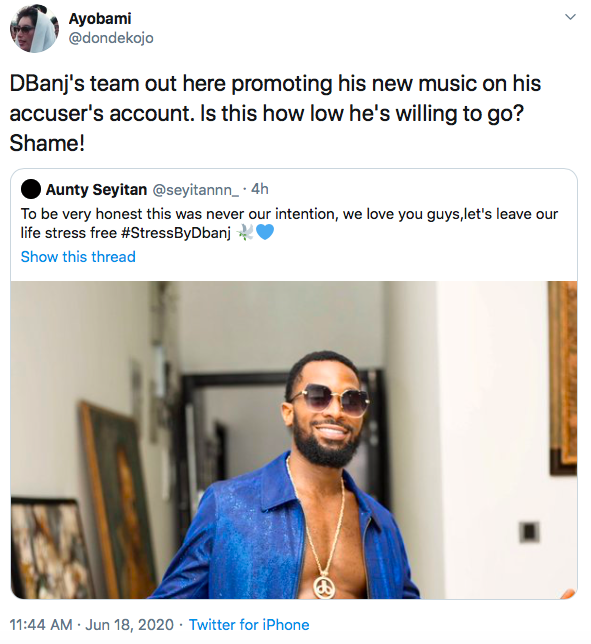 At this point, it does seem like there is a lot of shady things going on that give rise to so many questions… 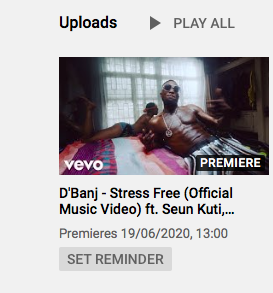 Several Twitter users state that when Seyitan first made the allegations, all she was looking for was an apology and acknowledgment of the alleged wrongdoing. 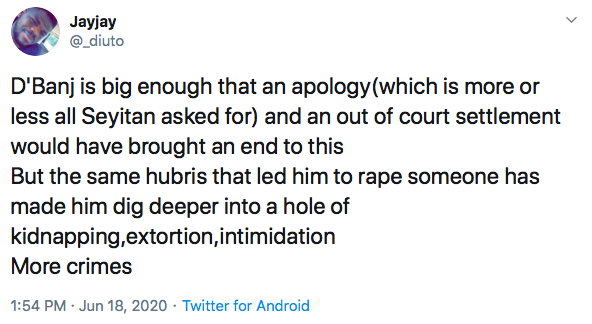 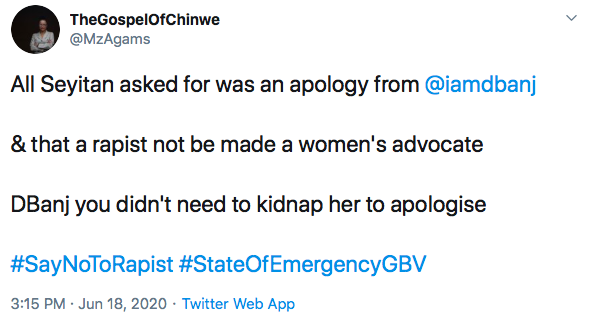 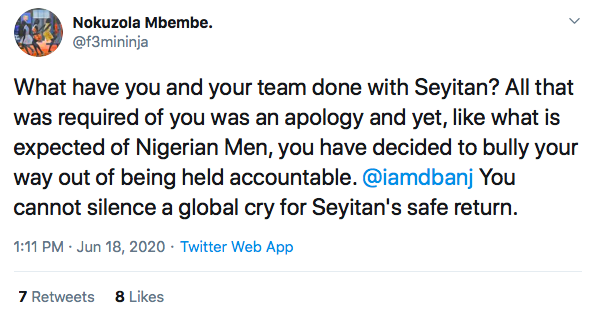 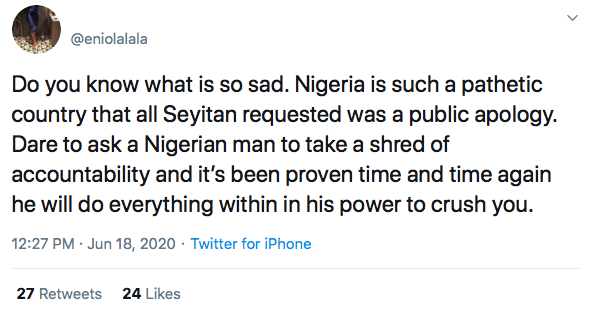 There has been so much outcry from the public. With several people calling on the brands that endorse D’banj to drop him from these endorsements.

There is also an ongoing petition to have the United Nations remove D’banj as a Youth Ambassador for Peace. The 2,500 signatures needed for the petition are almost complete.

While the first response from D’banj which was posted on his Instagram page has been deleted, the music star has been on Twitter and quoted this tweet with the words “Spot On”. 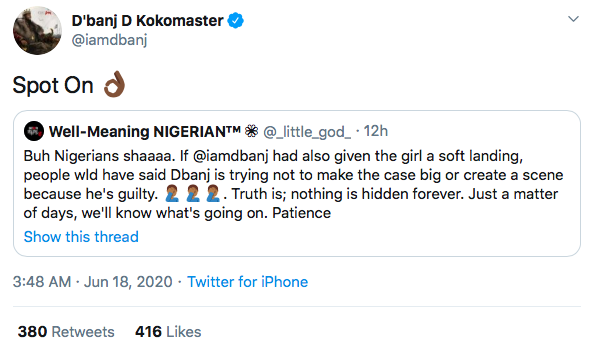 And finally, after weeks of silence, a few (too few) of D’banj’s industry colleagues are now speaking up too to ask questions and demand answers. 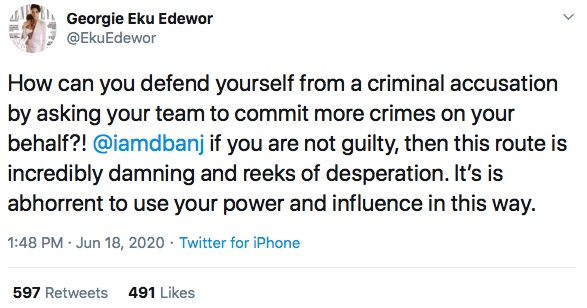 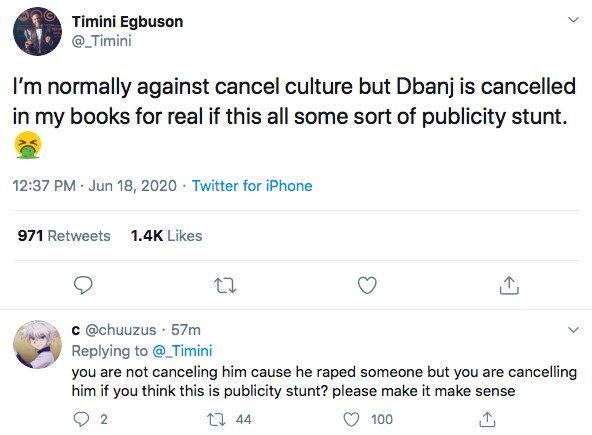 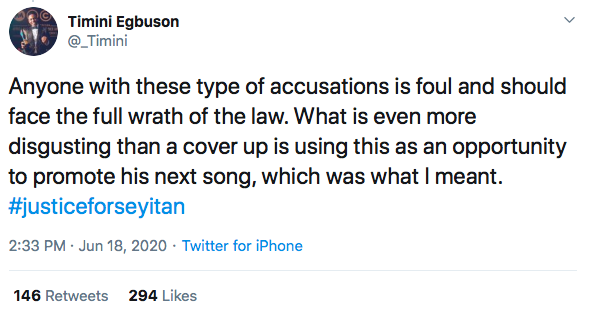 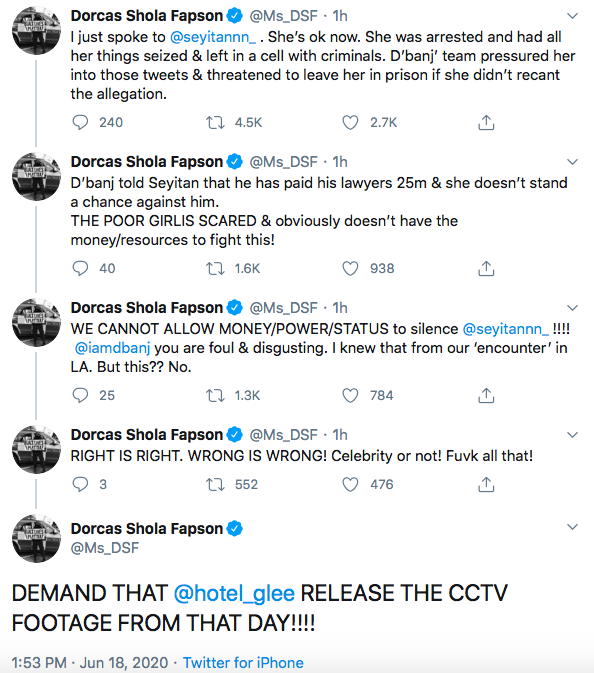 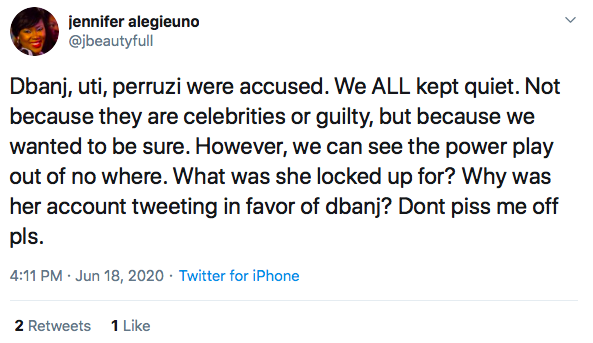 Because, really, what is D’banj doing?

Here’s what is true: in the words of Nigerian novelist Elnathan John (and as many many people have expressed on social media as well): 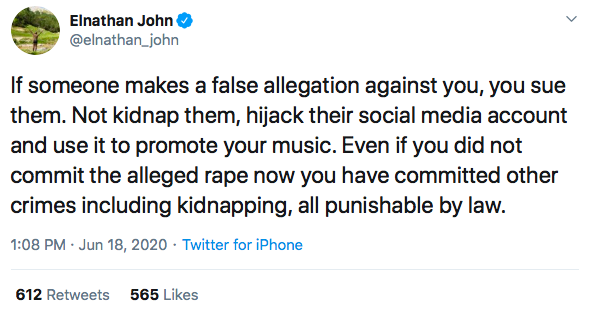 So, what is D’banj doing?

It is important to know that as at the time of publishing this, 4PM on the 18th of June 2020, Seyitan is no longer in custody and is in a safe place. But this is not the end.

Vanessa Mdee is speaking her Truth about Struggles with Anxiety, Depression & Alcoholism