This Report Puts Onitsha as the World's Most Polluted City | Kaduna, Aba, and Umuahia Listed among Top 20

Onitsha, a fast growing city in Anambra, a South-East state in Nigeria, has been tagged the world’s most polluted city according to a report published by the World Economic Forum.

According to the report, “Of the 3,000 cities in the WHO’s air quality database, the most polluted at the time of measurement was Onitsha, a fast-growing city in Nigeria, which recorded roughly 30 times more than the WHO’s recommended levels of PM10 particles. Peshawar in Pakistan was in second place, followed by Zabol in Iran.” 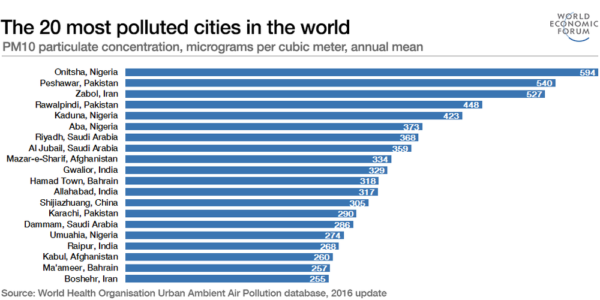 Urban air pollution continues to rise at an alarming rate, wreaking havoc on human health. At the same time, awareness is rising and more cities are monitoring their air quality. When air quality improves, global respiratory and cardiovascular-related illnesses decrease.