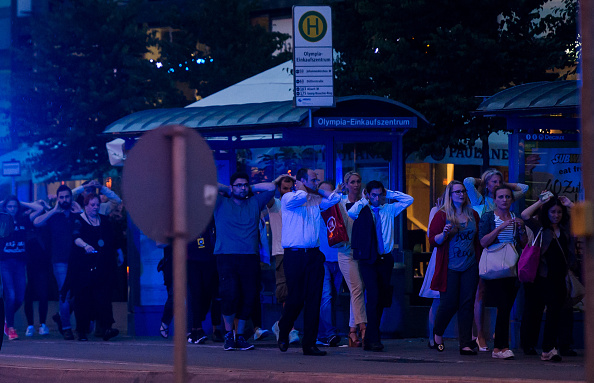 MUNICH, GERMANY – JULY 22: Police officers escort people with their hands raised from inside the shopping center as they respond to a shooting at the Olympia Einkaufzentrum (OEZ) at July 22, 2016 in Munich, Germany. According to reports, several people have been killed and an unknown number injured in a shooting at a shopping centre in the north-western Moosach district in Munich. Police are hunting the attacker or attackers who are thought to be still at large.

The German Federal Criminal Police Office (BKA) said on Monday that the authorities are investigating 60 asylum seekers in the country on suspicion of belonging and supporting terrorist organisations.

The BKA said in a statement issued in Berlin that the investigation was necessary considering the ongoing migration movement into Germany.

“We have to assume that there are active or former members, supporters and sympathisers of terrorist organisations and Islamist war criminals among the refugees.

Out of the 60 ongoing terrorist investigations, 20 have been launched in the past 10 weeks.

The organisation had received a total of 410 tip-offs from local authorities in Germany’s 16 federal states,” it said.

According to the statement, three of the four violent attacks committed in Germany over the past week were perpetrated by migrants who came to the country as asylum seekers.

“Late Sunday, a 27-year-old Syrian who had been denied asylum and was due for deportation to Bulgaria blew himself up outside a music festival venue in Ansbach, injuring 12 people. (Click here if you missed it).

On Sunday, another 21-year-old Syrian asylum seeker killed a woman and injured four others with a knife in Reutlingen in what investigators claimed was not an act of terrorism.

This morning, a 17-year-old asylum seeker registered as from Afghanistan attacked passengers of a Bavarian commuter train with an axe and a knife and injured five people.

Last Friday, an 18-year-old shooter opened fire on shoppers at a mall in Munich killing nine people and himself. Click here to read it.

The BKA also said in its statement that the number of people who have left Germany to join the Islamic State in Syria has risen from 800 in May to 840.

According to report, out of the third that have since returned, about 70 people received combat training or took part in active fighting, the BKA said.

I Did Not Sponsor Any Rally Against NASS Members in Bauchi – Gov. Mohammed Abubakar