Several People Dead, Wounded After at least One Gunman Opened Fire at a Shopping Centre in #Munich 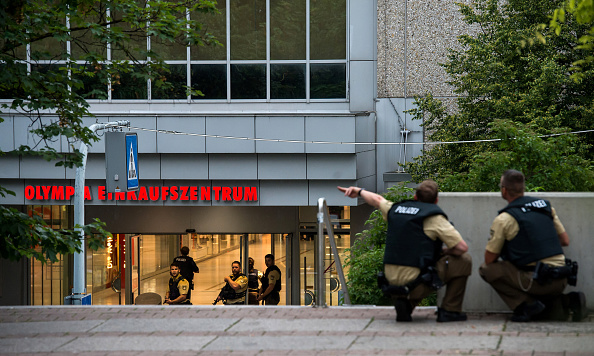 MUNICH, GERMANY – JULY 22: Police officers respond to a shooting at the Olympia Einkaufzentrum (OEZ) at July 22, 2016 in Munich, Germany. According to reports, several people have been killed and an unknown number injured in a shooting at a shopping centre in the north-western Moosach district in Munich. Police are hunting the attacker or attackers who are thought to be still at large.

The Deputy spokesman for the Munich Police Department, Thomas Baumann, said several people were killed on Friday in a shooting at the Olympia shopping centre in Munich.

“We are expecting several dead; several others had also been injured. The shooter or shooters has not been captured and the motive for the attack remains unclear. Police had received a call around 6PM but the shooting had started at about 5.52PM at a fast-food restaurant in the shopping centre,” he said.

Police cordoned off the area near Munich’s Olympic Park as officers rushed to the scene from all over the city.

Police and emergency vehicles could be seen outside the shopping centre. Helicopters were flying over the city.

The authorities had asked residents to stay indoors and avoid public places. Underground trains were suspended in the city.

Heavily-armed police also rushed to the city centre, where a panic had broken out and people ran from the pedestrian area to the central Karlsplatz, also known as Stachus.

There had been a false alarm, police said, but authorities still weren’t sure what the situation was in the city centre.

Meanwhile, Bavarian Interior Minister Joachim Herrmann was on his way to the capital of the southern German state.

“Train service has been completely shut down”, Bahn said.

Trains from all directions around the Bavarian capital were stopped before they could enter the city.

Police ordered public transportation in Munich to be stopped, a spokesman for MVG says.

Related Topics:GermanyMunichMunich Shooting
Up Next

No urgent need to evacuate Nigerians in South Sudan – FG

Ooni of Ife in Ghana to Promote Unity Among African Nations