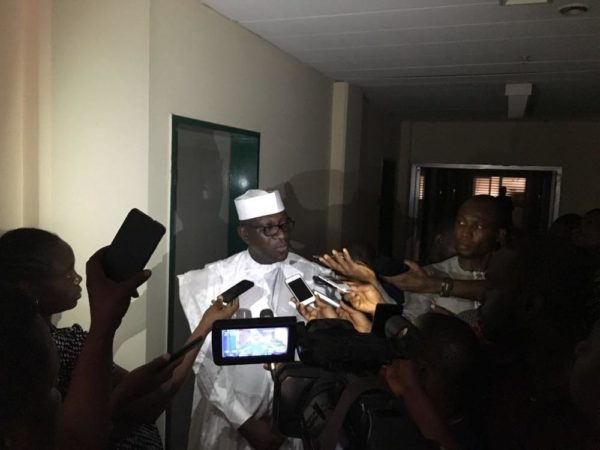 Hon Jibrin Speaking to Correspondents after the meeting with PACAC

The Presidential Advisory Committee Against Corruption, led by Professor Itse Sagay, on Wednesday, said it had begun ‘meeting’ on the documents submitted to it on the budget padding scandal by leaders of the House of Representatives.

The Executive Secretary of PACAC, Professor Bolaji Owasanoye, confirmed to PUNCH after the meeting with Jibrin that the committee had started considering the petitioner’s submissions and documents.

“What I can tell you now is that we are still meeting on the issue. It is difficult to tell you the outcome or what line of action we are taking next. It will be preemptive to say anything at this stage,” Owasanoye said.

Speaking to newsmen shortly after a meeting on Wednesday in Abuja, Jibrin said he took the committee through over his allegations against Speaker Yakubu Dogara and some other lawmakers.

He expressed his commitment to ensuring that justice prevailed over the allegations and his position against corruption.

“Most importantly, to ensure that a very comprehensive reform is carried out in the House of Representatives, clean up the budgeting system and the activities of the house in terms of oversight and investigation. Beyond the house, the country will be the biggest beneficiary and the winner at the end of the day,” Jibrin said.

He pointed out that he made several revelations in response to questions raised by the committee members.

The lawmaker, who further sustained his call for Dogara’s resignation, stated that it would pave way for an independent investigation into all the allegations made so far.

“I have expected that they will resign and submit themselves to investigations. Of course, the Leader of the House, Femi Gbajabiamila, has led by example by submitting himself to the police for investigation,” he said.

Jibrin said that he wanted Nigerians to understand that the whole thing was not only about Dogara, “but about changing the system and reforming the House of Representatives”.

“If some members of the House or Nigerians feel that Dogara should continue to call himself the number four citizen of this country, so be it. I have done my own part of it, I have exposed corruption. I have submitted petitions to the anti-corruption agencies, which is within my control and in the control of other members of the national assembly that believes in this course,” he added.

He assured the public that he would continue to do all that he could to ensure that justice was served on Dogara, Deputy Speaker, Yusuf Lasun and the Minority Leader Leo Ogor.

Now you can Enjoy Amazing Benefits from the ‘Sterling Couples Proposition’! Find out how it works