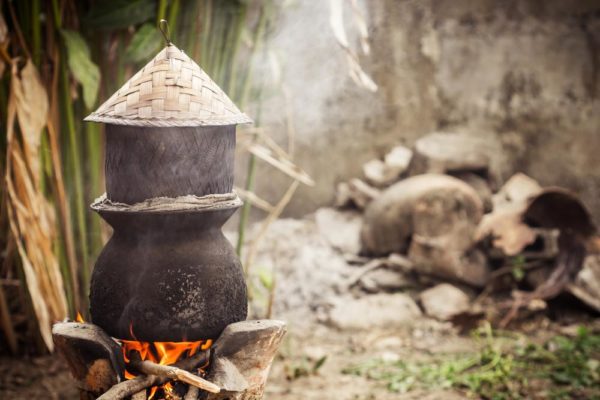 A middle-aged woman identified as Agnes on Sunday in Abakaliki lost the pot of rice she was cooking to thieves.

A News Agency of Nigeria (NAN) correspondent who visited Agnes’ residence behind Nnodo Secondary School, Amike-Aba on Monday reports that she was still in shock over the incident.

It took repeated appeals by the correspondent to make Agnes talk, as she maintained that her husband had barred her from speaking further on the issue to avoid negative attention to the family.

“I came back from a village-meeting late on Sunday and put the rice on fire so that my family could have their dinner and eat the remnant on Monday morning. This apartment, as you can see, has no kitchen so we cook in the space in front of the house, likewise other occupants of the building,” she said.

Agnes said that as she went inside her room to fetch some condiments, she was delayed by the attention she had to give to her crying child.

“I gave attention to my child who was crying and by the time I came out to continue cooking, the pot of rice had vanished, with the stove still enkindled. After I recovered from the shock, I started screaming which attracted my husband, family members and neighbours who were all as stupefied as I. When it was established that no occupant of the building took the pot, it dawned n us that the act was perpetrated by a thief who exploited the vulnerability of the improvised kitchen,” she said.

The woman declined further comments but her neigbour, Justin Mbam-Egbe, noted that the situation had re-awakened security consciousness among the occupants of the house.

“This is the first theft case we are experiencing and we will henceforth be security conscious to avert future occurrences,” he said.

A private security consultant in Abakaliki, Dr. John Odikwa, blamed such incident on the current economic recession in the country.

“The country has degenerated to a level that people now steal pots of rice and soup and with the yuletide approaching, the society should be ready for serious security challenges. The Federal Government should take immediate measures to alleviate the sufferings of the people to prevent total breakdown of law and order,” he said.

The Public Relations Officer of the Ebonyi police command, George Okafor, described the incident as funny and noted that it had not been reported to the command.

“It is difficult for such incidents to be reported but we assure the citizens of the state of adequate protection of their lives and properties,” he said.

Related Topics:Ebonyi State
Up Next

Senator Melaye To FCT Minister: Slaughter Any Cow Found in the FCT or Prosecute the Herdsmen