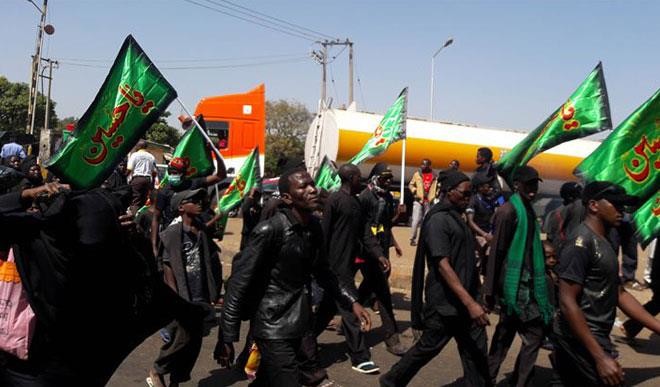 The Police Command in Sokoto State on Wednesday confirmed that hoodlums killed a Shiite (a member of the Islamic Movement of Nigeria) in Tudun Wada in Sokoto North Local Government area. Another three Shiites were also reportedly killed in Kaduna and nine killed in Funtua, Katsina.

Security forces in Katsina had banned the procession on Tuesday.

Deputy Commissioner of Police in Sokoto, Alkasim Sunusi  confirmed that the Shiite man killed in the state was attacked on his way to a procession of the sect by a mob.

Sunusi said that the victim was “seriously beaten and killed, while his Toyota Avensis vehicle with registration number BRK 144 CM was burnt by the hoodlums”.

Sunusi said that three motor cycles belonging to the sect members were burnt, while one person was arrested with cutlass.

The police boss said that the command had since embarked on further investigation and called on members of the public to go about their normal businesses.

The IMN on its own said three of its members were killed by a mob in Tudun Wada area of Kaduna during a procession.

Abdulmuminu Giwa, a member of the outlawed group, told the News Agency of Nigeria (NAN) in Kaduna that the mob also burnt down a house of one of the group’s leaders, and demolished its school located in the area.

Reports from Zaria, erstwhile national headquarters of the group, however, said the city was calm as residents went about their normal business.

The Kaduna  State Police Command confirmed the attack on the houses of some of the sect’s members in Tudun Wada but denied receiving any report of death.

The command’s spokesman, ASP Aliyu Usman told NAN that security had been beefed up in the area to prevent further breakdown of law and order.

He warned hoodlums and mischief makers that the police would deal decisively with anyone caught fomenting trouble.

The Kaduna State Government had on Friday, October 7, outlawed the group.

The government also ordered the arrest of the group’s spokesman, Ibrahim Musa, who said the Shiites would challenge the order in court.

Musa in a statement said today was observed as Ashura in major cities across Nigeria by the Islamic Movement.

He said 13 persons were killed by thugs in Funtua in Katsina State, Sokoto and Kaduna.

The procession of the martyrdom of Imam Husain started in Funtua, Katsina state peacefully, but was later stopped by a team of policemen who were drafted to the scene to forcibly stop the march.

After firing teargas canisters on the procession, the police opened fire with live bullets killing nine instantly and injuring about 20 others. There are reports that they went with some victims.

In Kaduna, the peaceful Ashura procession was concluded without any incident. However,  armed thugs attacked some members of IMN on their way to their various homes injuring them. This was followed by torching of Islamic Centre of IMN at Tudun wada Kaduna and subsequent demolition  by a combined team of policemen and the Army. Three members of the Movement were killed there.

The story was similar in Jos, Plateau state, where (suspected) armed soldiers brutally attacked the Ashura procession, then proceeded to invade the Islamic Centre belonging to IMN, making some arrests while threatening to demolish the worship complex.

In Kano though, the police arrested some Musulim sisters of IMN on their way to their various homes.

They have been taken to Bompai police headquarters. A number of arrests were also made in Kaduna and were arraigned before the Shariah Court Daura road. These were sent to prison,” he said.