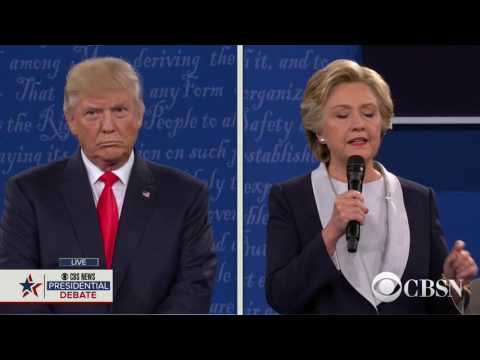 The duo did not shake hands before the start of the debate, but did so at the end.

Here are some highlights from the debate:

It was a follow up of the first question by moderator, Anderson Cooper. Trump said:

We have a world in which you have ISIS … [they are] frankly drowning people in steel cages. You have so many bad things happening. This is like medieval times.

Yes, I am embarrassed and I hate it but it is locker room talk and it is one of those things.

I will knock the hell out of ISIS and we will defeat ISIS. ISIS happened a number of years ago in a vacuum that was left because of bad judgement. I will take care of ISIS.

Prior to the debate, Trump had held a press conference with three women who accuse former president Bill Clinton of sexual misconduct – and those women were then seated in the front row of the debate audience.

Clinton said the 2005 remarks proved Trump was not fit to lead.

“With other Republican nominees for president, I disagreed with them. Politics, policy, principles. But I never questioned their fitness to serve. Donald Trump is different,” Mrs Clinton said.

I said, starting back in June, that he was not fit to be and commander-in-chief. And many Republicans and independents have said the same thing.

But I think it’s clear to anyone who heard it that it represents exactly who he is,” Clinton said.

“If you look at Bill Clinton — far worse — mine were words, his were action.

There has never been anybody in the history of politics in this nation that has been so abusive to women.

So you can say anything you want to say, any way you want to say it, but Bill Clinton was abusive to women. Hillary Clinton attacked those same women.

So don’t tell me about words… I apologise for those words. But it is things that people say, but [it’s] what President Clinton did,” Trump said.

“So much of what he has said is not right. But he gets to run his campaign any way he chooses. He gets to decide what he wants to talk about, instead of answering people’s questions. When I hear something like that, I am reminded of what my friend Michelle Obama advised us all: When they go low, you go high,” she said.

Islamophobia and Ban of Muslims Entering the U.S

It is extreme vetting. We are going into areas like Syria where they are coming in by the tens of thousands because of Barack Obama, and Hillary Clinton wants to allow a 550 per cent increase over Obama.

People are coming into our country — we have no idea who they are, where they are from, what their feelings about our country are.”

She wants 550 per cent more. This is going to be the great Trojan horse of all time.

Both candidates are still talking about the two biggest issues of this election campaign — whether Trump pays any tax, and the private email server Clinton used while secretary of state.

When an audience member asked about making sure the wealthiest Americans pay their fair share of tax, Clinton remarked:

It is sort of amusing to hear somebody who has not paid federal income taxes in maybe 20 years talking about what he is going to do.

But I’ll tell you what he is going to do: his plan will give the wealthy and corporations the biggest tax cuts they have ever had.

Donald always takes care of Donald, and people like Donald, and this would be a massive gift.

Trump agreed he had avoided paying federal income taxes because the law allowed him to do so. “I have a write-off, which is wonderful,” he said.

But he also boasted that he had paid “hundreds of million dollars in taxes”.

Trump said if he was elected, he would “get a special prosecutor to look into” Clinton’s emails.

We are going to get a special prosecutor and we are going to look into it, because you know what? People have been… their lives have been destroyed for doing one-fifth of what you have done, and it is a disgrace, and honestly, you ought to be ashamed of yourself,” he said.

Clinton repeated her apology for using the private server, and again conceded it was a mistake. “I take responsibility for it using a personal email account, obviously if I were to do it over again, I would not, I am not making any excuses,” she said

Clinton also said in her response: “It’s just awfully good that someone with the temperament of Donald Trump is not in charge of the law in this country.”

Then Trump replied: “Because you’d be in jail.”

Trump said he and his running mate disagreed on Syria

The candidates were asked about how the US should respond to the war in Syria and the humanitarian crisis in Aleppo.

Raddatz followed up by putting to Trump comments from his vice presidential nominee Mike Pence, who has said provocations by Russia needed to be met by American strength in Syria.

“He and I have not spoken and I disagree. I disagree. I think we need to knock out ISIS. Right now, Syria is fighting ISIS,” Trump said.

They both had nice things to say about each other

A member of the audience asked the candidates to name one positive thing that they respect in one another.

Clinton answered first: “I respect his children. His children are able and devoted and I think that says a lot about Donald. I don’t agree with nearly anything else he says or does, but I do respect that. I think that is something that as a mother and a grandmother is very important to me,” she said.

Early on, Raddatz pressed Clinton on the controversy over her use of private email account during her time as Secretary of State and her decision to delete some 33,000 emails. “You don’t call that extremely careless?” Raddatz said to Clinton.

After Clinton’s two-minute response, Cooper moved the next question on to a new topic. But Trump, the Republican candidate, interjected: “Why haven’t you brought up the emails?”

Cooper replied: “We did bring up the emails.” As he moved to the fate of Obamacare, Trump said with sarcasm: “It’s nice – one on three.”

That comment was interpreted as Trump claiming that Raddatz and Cooper were supporting Clinton at his expense.

Trump’s suggestion of bias by the debate moderators is in keeping with his past claims that the “mainstream” media coverage of his presidential campaign has been unfair.

Watch the full debate below: