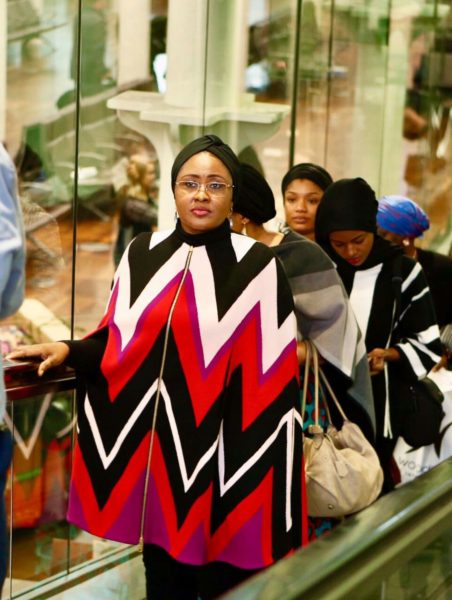 It’s no longer news that President Buhari and his wife, Aisha, this past weekend spoke to each other through interviews and press conferences, neglecting the simpler ways of communication such as phone calls, emails, or even reserving the conversation for #theotherroom.

Well, we do not know if they had discussed it in the kitchen, the living room and other room and the issue was not resolved, so they decided to throw it out in the open so that we can debate about it.

While the Presidency has said that His Excellency was just bantering, the 73 year old man is basically sharing what men (and women) his age subscribe to.

Buhari gave a second interview where he told the journalist that the wife is the one that takes care of the kitchen, the living room and the other room – even if she’s working. He also said that his wife takes care of him (although this is ambiguous).

In the generation of our fathers and mothers, there were strict gender roles. Men provided for, and protected their families, while women manage everything about the family. Although in many occasions, the women worked in the farmlands of their husbands.
The president understood that these days, women go out and grind and it’s no longer what men used to do, and that’s a good thing, coming from a man whose generation have been taught that women should be home-keepers, while men do the working.

It reminds me of the Pastor Adeboye’s (a man in Buhari’s age range) ‘cooking and praying for one hour’ statement. Adeboye also talked about men having a job (to provide for and protect their wives) before proposing to marry.
Things have changed from the time these men grew up. These days, you can outsource everything… from cooking to cleaning, to childcare, and even childbirth. We are the turning point generation to imbibe the culture that now works into the next generation. Some women are the breadwinners of their families.

Culture is dynamic, what worked 50 years ago may not work now in light of the realities on ground.

Back to Buhari’s statement. For a political leader, he used the wrong choice of words. Although like I said before, it was a show of how families in his generation were run – something most of our parents can relate to.

I asked someone about what she thought of the President’s statement and she said “before nko?” Meaning he was right. The person went further to explain that she didn’t mean that a woman’s role is restricted to the kitchen and the other room, but that a woman is the one to take care of the home. While some women these days may not agree with that, others subscribe to this ideology. I have heard too many women say they won’t allow another woman cook for their husbands. Their choice, their family and I don’t think what happens in people’s families should be turned into a social debate.

A man of the previous generation, during a marriage seminar one time said, “I wash my wife’s undies and it is nobody’s business”. If a couple decides to share roles in a specific manner, it is basically no one’s business.

In this generation however, no guy/girl even wants a woman/man that will end up as a parasite or a liability. Cooking or praying don’t seem to matter these days and again, I think it’s none of any one’s business how one intends to choose a partner or run their home. (Except of course, one or both parties involved seek your advice).

Let me share a story with you. While I was a teenager, I was cleaning the house and reminiscing about a teaching of Dr. Myles Munroe on marriage. I said to myself that I won’t marry a woman who can’t cook. In that teaching he said, ask yourself, ‘will you marry you, if you were you?’ I realised my folly and made up my mind to improve my culinary skills. Try to answer that question whether you are married or not – I believe this is a true test of equal opportunities.

We cannot take away the fact that women have been sidelined for so long, and it’s a great thing that women are rising and shattering glass ceilings, blazing the trail for others (women and men).

We shouldn’t take the president’s word as an insult on women, but as a pure description of how far we have come.

However, we should be careful of how we treat issues of the girl child while trying to shatter such stereotypes (which I feel is not an insult on women as most women of that generation subscribe to such gender roles).

While we have to ensure that girls are well taken care of, we also have to look at the boys who need care too. With all the girl child interventions everywhere, there’s a tendency for boys to feel neglected. Mind you, they are all children and equal opportunities should mean equal opportunities.

We look at the negatives of telling a girl it is her role to take care of her husband and family and why she has to learn how to cook so that another woman does not take her place. Boys were also taught to be the providers of their family and not to cry when he’s in pain because… he’s a man. How devastating! While sometimes some of those teachings were as a result of perceived importance of men over women (which is very wrong), other times they are as a result of perceived gender roles.

Three girls beat me to clinch the first position three different times while I was in elementary school and each of those times people said (in pidgin English) ‘you allowed a woman beat you in class’. Even at that young age I always thought, ‘she beat me because she got the highest score, because she answered correctly, some questions that I failed. I don’t understand why it’s a big deal because she’s a girl’.

Women need not be told these days to be ambitious, they know. Parents these days are doing a good job raising their girls as well as their boys to have big dreams and strive to achieve them.

Even in the generation where women were perceived to be sidelined rose women that did great things.

It is my opinion that teaching a child certain skills should be based on the observable qualities of the child in question and not the child’s gender. This, for me, should be so if we want to change this ideology of women and “the kitchen and the other room” as well as men and “being a man”. That being said, it is the responsibility of the parents to bring up their children how they want.

However, we must understand that the ‘but you’re a man now, you should know how to do this’ or ‘you’re a woman now, why can’t you do that’ statement is a reflection of gender roles and we should not make life more complex than it already is by trying to force people to change what they think a man should do and what a woman should do. In situations like this, it’s more about human relations than it is about gender roles. If someone is not comfortable with whatever it is you say or do (to them), and they tell you, you should be able to make adjustments (when relating to them) and not make your position the rule. It’s a secular and a free world. The strategy to win someone over has also been tolerance, peace, and love.

Life has become too complex for all of that. Someone’s pregnant fiancée is the baby mama to his step sister’s current boyfriend. When the fiancée gives birth and his step sister and her boyfriend marries, one child becomes the step child of two step siblings. Let’s be simple and allow people live their lives and not shove anything down anyone’s throat.

Finally, it is my opinion that men and women are equal but different. It shows physiologically and emotionally.

Related Topics:Aisha BuhariCultureFeminismPresident Buhari's Statement About His WifeThe Other RoomThe Subjugation of women
Up Next

The Fertile Chick: When Miscarriages Happen