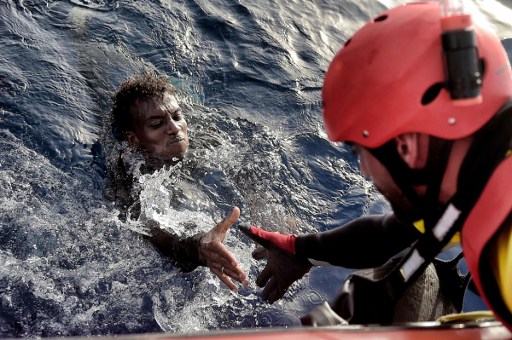 A migrant is rescued from the mediteranean sea by a member of Proactiva Open Arms NGO some 20 nautical miles north of Libya on October 3, 2016.
Thousands of migrants are “racing against the clock” to make the perilous crossing from Libya to Europe before summer ends, with authorities in the conflict-torn country at a loss to stem the flow. / AFP PHOTO / ARIS MESSINIS

No fewer than 240 illegal migrants have been reported dead in two shipwrecks off Libya.

The deaths on Thursday bring to 4,220 migrants that have either died or missing in the Mediterranean Sea crossings, the highest count on record.

Carlotta Sami, a UNHCR spokeswoman in Italy, said 31 survivors of two shipwrecks who arrived on the southern Italian island of Lampedusa reported that the rubber dinghies they were traveling in had capsized Wednesday in heavy seas shortly after leaving Libya.

The first dinghy — which carried around 140 people, including six children and about 20 women, some pregnant — sank when wooden planks laid at the bottom broke, causing the dinghy to capsize 25 miles (40 kilometers) off the Libyan coast, the UNHCR said. Twenty-nine people were rescued, and 12 bodies were recovered.

According to WasgingTimes In a separate operation, two women found swimming at sea told rescuers that 128 other people had died in their wreck.

“I am deeply saddened by another tragedy on the high seas,” said U.N. High Commissioner for Refugees Filippo Grandi.

“So many lives could be saved through more resettlement and legal pathways to protection.

The Mediterranean is a deadly stretch of sea for refugees and migrants, yet they still see no other option but to risk their lives to cross it.”

1 million poor Nigerians set to get Buhari’s ₦5,000 each

Get Involved in the Friend Zone Dance Challenge & Stand a Chance to Win N100,000!