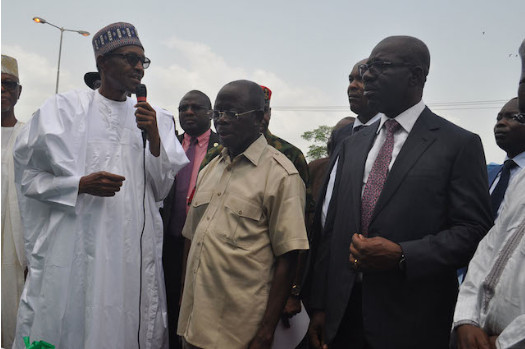 Grace Egbon an elderly lady in Benin City, the Edo capital, has donated a goat to President Muhammadu Buhari to show her admiration for “his selfless lifestyle and passion to liberate the masses.”

Governor Adams Oshiomhole of Edo received the ‘unique gift’ on behalf of the president.

Egbon, a supporter of the All Progressives Congress (APC), registered in Ward 7, Oredo Local Government Area of Edo state, said she had longed to meet the President to show her admiration for his quality of leadership.

According to NAN, a window of opportunity opened to Egbon when the President was scheduled to commission the ultra-modern Samuel Ogbemudia College in Benin City, during his just concluded two-day working visit to Edo.

She braced the odds and came all the way with her surprise gift to the President which she had kept for the special occasion.

“She tore through the thick crowd, making her way straight to the President who at the time had finished the official engagement and was heading for his waiting car.

Many in the crowd got emotional seeing the elderly lady pull through the crowd with the goat, determined to make a presentation to the President.

Gov. Oshiomhole, who noticed the security cordon between the lady and the President, came to her rescue.

He (Oshiomhole) alighted from the President’s convoy to receive the goat on behalf of the President,’’ a protocol official at the scene of the incident told NAN.

She thanked the President for accepting the gift which was handed over to protocol officials.

In his remarks on behalf of the President, Gov. Oshiomhole commended Grace for her kind gesture.