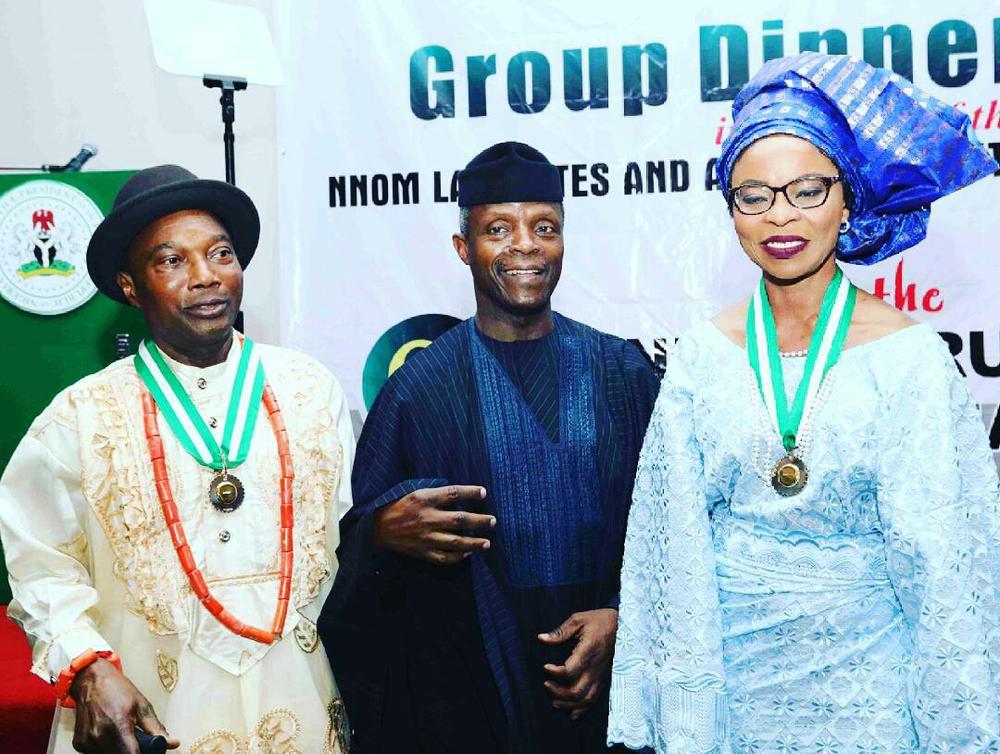 Vice President Yemi Osinbajo has identified the importance of merit in giving reward and said that quota system was detrimental to the progress of any society.

He said this in Abuja at the conferment of the Nigerian National Order of Merit (NNOM) on two professors, Omowunmi Sadik, an environmental scientist; and Tanure Ojaide, a poet and literary critic.

According to him the nation had placed quota before merit which “we know does not work’’ and called on leaders to make sacrifices and commit to a country run on merit, integrity, hard work justice and patriotism.

“To build a new Nigeria, we need a new tribe of men and women of all ethnicities, of all faith committed to a country run on high values of merit ,  integrity, hard work, justice and love of country.

A tribe of men and women who are prepared to make the sacrifices and solve the constraints that is crucial to building a strong society.

Who are prepared to stick together, fight corruption side by side, insist on justice even when our friends and those of our tribes and faith are at the receiving end.

A tribe consisting of professionals, businessmen, politicians, religious leaders and all of those who believe that this new Nigeria is possible.

This requires a new way of thinking, a new leadership corps, a new tribe.

And the evidence we have seen today is that this country can truly be great and so may I just challenge us today that it is time to populate that new tribe,’’ he said.

The vice president noted that the award recipients demonstrated that Nigeria was blessed with tremendous talent and that their writers, poets and scientist were world class.

He, however, expressed surprise that the individual greatness of the citizens did not correlate with that of the nation.

Osinbajo said the national predicament was the result of an elite failure to accept responsibility or privilege to shape the values of the society.

“We must define clearly what is lofty, noble and deserving of honour and how these values can be sustained, preserved and enforced. This is the burden of privilege so that it is for us to create the moral and philosophical premises for integrity in the public service, fidelity to the rule of law and the creation of meritocracy as a rule,’’ he said.

Osinbajo commended the laureates for their intellectual accomplishments and said they would remain as mentors for the younger generations.

Also speaking, the Chairman of the Merit Award Board, Prof. Moses Essien, said the award was designed to identify the nation’s best and brilliant persons and reward them to serve as role models for the youth.

Essien said that since its creation, the board had demonstrated that the nation had the best citizens who could compete among their peers in the globe.

He said the awardees had also contributed to national discourse to make the nation great.

Responding, Sadik thanked the federal government for the award and gave the assurance that it would spur her for greater contributions toward national growth and humanity.

She noted that the fact that the administration had focused attention on things that matter to the people sent serous message to the rest of the world.

She observed that her award showed that women had as much power in sciences and the academia as their male counterparts.

Ojaide, a recipient of many international awards, on his part hailed the organisers of the award for recognising intellectualism adding that the award was the most important in his life coming from his country.

Court Orders release of El-Zakzaky within 45 days, Awards him N50m as Damages