Put a Smile on 7 Million Faces this Season! Join the 'Wecare4IDPs' Campaign by Donating at least N1,000 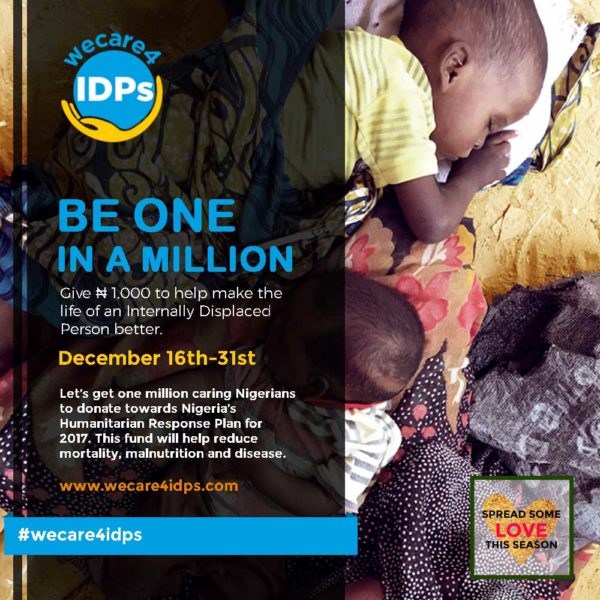 Here’s is an opportunity to put smiles on the faces of Internally Displaced Persons (IDPs) in Nigeria.

The WeCare4IDPs, an initiative launched by Union Bank in partnership with notable media organisations is calling on individuals and organisations to join hands to improve the lives of IDPs.

The citizenship initiative is campaigning for at N1,000 donation from N1 million Nigerians, and it will run from December 16th to December 31st. Funds raised will go directly to funding direct impact projects defined in the 2017 Nigeria Humanitarian Response Plan (HRP) developed by the United Nations Office of the Coordination of Humanitarian Affairs (UNOCHA) with the support of the Federal Ministry of Budget and Planning.

It is estimated that more than 8.5 million people have been affected by the insurgency in the North East and require humanitarian assistance. About 6.9 million children and adults are expected to be impacted if the 2017 HRP is fully implemented.

WeCare4IDPs is expected to help bridge funding gaps to implementing the HRP which is estimated to require USD $1.05bn.

Funds raised from this initiative will be committed towards the implementation of projects in 5 key areas:

Head over to www.wecare4idps.org to see how to donate.