Gov Obaseki of Edo Promises to Build on Ogbemudia's Legacies 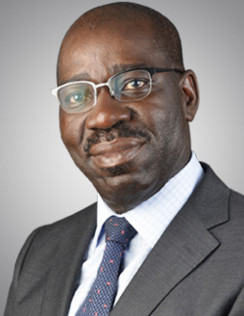 Edo State Governor, Godwin Obaseki has said that he will build on the legacies of the former governor of defunct Bendel state, Dr Samuel Ogbemudia who died on Thursday aged 84.

He said he’ll build on Ogbemudia’s legacies to transform the state.

He made the pledge when he visited the family of the late former governor to condole with the members in Benin.

Obaseki, who was represented by his the Deputy Governor, Philip Shaibu, said Ogbemudia did great work in different spheres of development in the state.

He described Ogbemudia as a great man, who left a good footprint for Edo and Delta states to emulate in terms of development.

Obaseki prayed that God should give the family the fortitude to bear the loss, adding that the state would continue to remember the former governor for good.

In his response, Samuel Ogbemudia, the eldest son of the deceased, lauded the state government for its support during their late father’s sick period.

He appealed to the government to continue to stand by the family at all times.

The late Ogbemudia, who was military and civilian governor of the defunct Bendel state at different times, died on Thursday night in Lagos.

The Plan was to Threaten him and Demand N63,000 – Man Accused of Killing his Boss