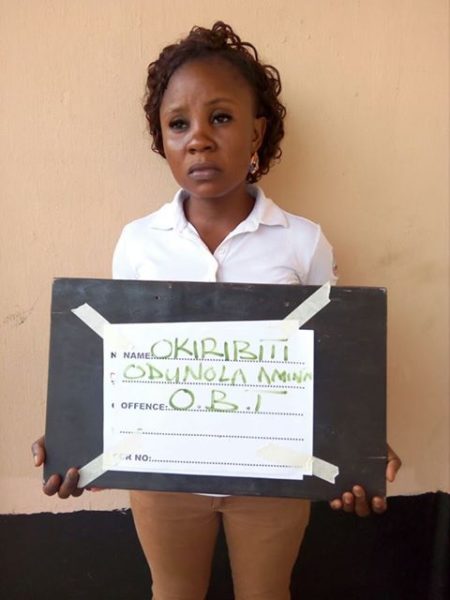 Operatives of the Economic and Financial Crimes Commission (EFCC), Ibadan Zonal office, have arrested one Aminat Okiribiti for allegedly conspiring with others to defraud a woman of her money, under false pretence.

The EFCC announced this in a statement on Thursday, adding that the suspect engaged in Advance Fee Fraud.

It stated that Aminat, with others now at large, had allegedly conspired, using the pretence of providing cure and spiritual solution to health challenges, to defraud the victim of the sum of N45 million.

The statement added that Aminat, 34, married to one Wande Okiribiti, 47 who is still at large, had confessed to committing the crime.

She had confessed that some of the money obtained from the victim, was collected by her through her bank account in a new generation bank, located in Ibadan.

Recounting her ordeal, the complainant said that she met Wande (suspect’s husband) sometime in October 2014 at Utako, Abuja while in search of a cure for the health challenges of her children.

“Wande presented himself as a local herb hawker and a spiritualist capable of providing solutions to all problems and lured me into believing he had the cure to my children’s challenges.

I subsequently made different payments as advised, totalling N45 million, but became suspicious at the request for funds transfers, which continued without solution to the problem,” she said.

The complainant, having suspected foul play, petitioned the commission, necessitating the arrest of the suspect.

He urged members of the public to be wary of the age-long tactics to avoid falling into the hands of fraudsters.

The suspect will be charged to court as soon as investigations were completed.

Would you Decide Not to Marry a Man Even If You’ve Had His Child? #LiterallyWhatsHot