Unconscious People Do NOT Want Tea! As with Tea & Sex...There's No Such Thing As Imagined Consent 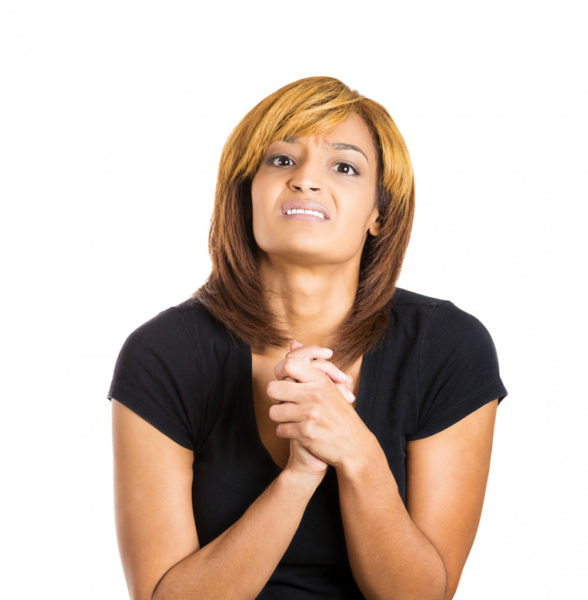 As a result of the events of the past 24 hours, it has become imperative to address the issue of consent, and everything that it entails within the ambit of sexual relations. At the Big Brother house in South Africa, this weekend, one of the housemates, Kemen was caught on camera touching another housemate, TBoss, while she was sleeping. The resultant effect of his action led to his swift disqualification, as the organisers and sponsors of the show emphasised on the zero tolerance for such conduct.

What ensued, pursuant to the disqualification, was rather unfortunate, as other housemates castigated TBoss, and blamed her for events that occurred. This was before Big Brother called another housemate, Bisola, into the diary room to show her the video that led to the decision to disqualify and evict Kemen.

What is worrisome, is not just the shaming of the victim, but that even on the outside world, social commentary was loud in its disagreement of the decision of Big Brother. Comments suggesting that TBoss deserved to be touched inappropriately while sleeping, was deeply harrowing – especially where the world is pushing for zero tolerance for sexual assault. Even more troubling was the suggestion that Kemen did not require consent from TBoss since she had hitherto asked for a massage, gone topless in the house, and also shared a bed with the Kemen.

All of these comments make it imperative to continue the awareness on what constitutes assault. Sexual relations between two adults require consent, for it to be permissible, and not illegal. Key words: including consent, and being of age.

The question of what constitutes consent appears to remain blurry for a lot of people, so we have found the following videos to break it down – as visual aid is very vital in education.

Please watch, for clarity – if you’re still unsure of what it means to give or receive consent.

Pay special attention to the information at the 1.20 minute mark

Here’s another video, titled ‘Whistling’ to simplify this issue. (Video by Project Consent)

As the world prepares to commemorate the International Women’s day on 8th of March, we implore our readers – male and female to stand up for justice and the rights of women. Every day, gender-based violence is perpetuated and encouraged because victims are blamed and shamed into silence.

Perpetrators of evil are counting on your silence, and it is for this reason that they continue to act in such a despicable manner. Depravity continues to thrive because of the blatant confidence that there are no consequences.

It is even more painful to see that many women are at the fore-front of victim shaming, and the covering up – especially within the family. There are so many stories of mothers who have refused to acknowledge the efficacy of the claims made by their own children, simply because they are ashamed of the implication. So many young girls are being defiled by ‘uncles’,’brothers’ and ‘fathers’ within the household – under the guise of ‘trying their luck’ on a daily basis. Women who attempt to speak up are shamed for simply being women. Surely, bringing ‘disgrace’ to the family cannot be more important than your daughter being raped in your house.

A lot of social commentary within the last 24 hours has alluded to the fact that a sleeping TBoss could have pushed the perpetrator of the assault away. Some even suggest that she pretended to be asleep. Others inferred that she even welcomed the violation of her body.  This is deeply worrisome, and  brings us back to the issue of laying the blame at the feet of the victim. How does a sleeping person, or an underage person, or a vulnerable person defend themselves in a world where despicable, perverted men are roaming about? How does a woman get justice when the perversion of said men are covered up and encouraged by other women?

How deep rooted is the mindset that it is ever okay to be violated? How does one begin to unpack the rationale behind this tweet below? 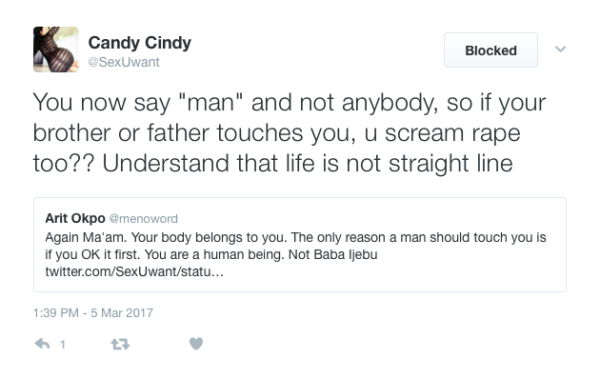 This is one person, but she represents millions of people who see nothing wrong with a person being touched, handled against their will.

If you find yourself at any point defending someone who inserts their finger(s) into the vagina of a sleeping woman, then you probably need to re-examine yourself.

As we approach the 8th of March, a day selected to celebrate women, and to openly discuss the issues that affect women across the world, I implore you all to conduct a self-examination into what actions you plan to take, going forward, to rid the world of incidences of sexual assault, gender-based violence and inequality that is ravaging our continent, and even more closely, our country.

Stand up for the truth.

No means NO. Not, ‘yes, come and touch me while I’m sleeping’; not ‘yes, I may be interested.’ No, means No. Not saying YES, also means NO.

The absence of express consent is NO consent. Do not assume, or imagine that anything other than a yes means it’s okay to go ahead and touch.

If you are a victim of sexual assault, there are laws in Nigeria under which you can seek justice. There are also organisations like the Mirabel Centre  that provide succour – emotional, mental and medical for victims.

As for perpetrators of such acts of violence, the full arm of the law should be invoked upon them. Society also has the responsibility to ostracise and boycott – to serve as a deterrent for other offenders. (Especially those caught on camera, where there’s incontrovertible evidence of assault)

On behalf of the BellaNaija team, I write to declare that we stand firmly against all forms sexual assault, rape  and domestic violence.

Related Topics:consentSexual Assault
Up Next