Ebenezer Obey at 75: His Music helps me Sleep - Olusegun Obasanjo 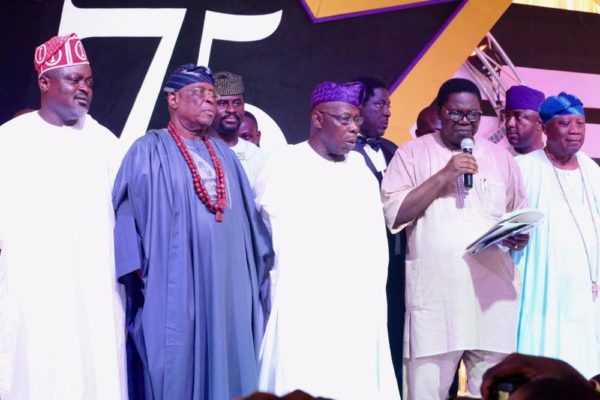 Speaking at the reception, Obasanjo described the celebrant as a musician of international repute, a revered evangelist and businessman of note. He added that whenever he was finding it difficult to sleep or while doing a serious work, he would have Obey’s music playing slowly in the background.

He noted also that the musician who has been on stage for over three decades, has taken Nigerian music to the global podium. He said the music legend has maintained decorum and decency in his conduct and content as an artist and musician. He included that he has elevated God through his music and impacted positively on the society and his life teaches determination, hard work and perseverance.

“One of the important lessons to be learnt from his life is that there is no height a man cannot attain once he is focused. His life as taught the lesson that irrespective of one’s background, one can get to the pinnacle of one’s chosen career.” Obasanjo said.

Meanwhile, Governor Amosun announced at the interdenominational church service held in honour of the music icon that his administration was planning to build a museum in honour of Obey.

He added that the Obey’s music taught totality of life and it has moved beyond Nigeria to the entire global community adding that he never failed to listen to his music every morning before setting out for the office because there was always a prayer or a philosophy, which could serve as driving force for the day.

All I see in him at 75 is the awesomeness of God in his life. There is always something to learn from your music. I play Ebenezer Obey-Fabiyi’s music every morning. Your music teaches the totality of life, it teaches essence of life and living. Your music has moved beyond Nigeria to the global community.

We will establish a museum where all your works will be kept for generations yet unborn to know about you and other legends from the state.