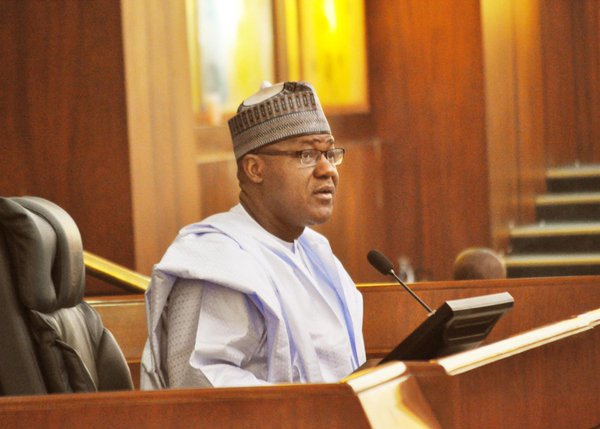 The Speaker of the House of Representatives, Yakubu Dogara, on Tuesday in Abuja released detail of his salary.

Releasing the payslips of October, 2016 to March, 2017 to newsmen, Chairman, Committee on Media and Public Affairs, Rep. Abdulrazak Namdas said that the move was in furtherance of his commitment to transparency and accountability in governance.

This came after Kaduna State Governor, Nasir El-Rufai released details of his salary and challenged the national assembly to do same.

Namdas, however, said that El-Rufai did not publish his security votes as required but the security budget of the state.

The Speaker had specifically urged El-Rufai and governors to disclose their security votes and also publish what they did with local government funds under their jurisdiction.

“The call by the Speaker was for El-Rufai to extend his advocacy on transparency and accountability to other arms and tiers of government in order to remove the lid of secrecy that has beclouded expenditures at state level. We note that what Mallam El-Rufai published was the security budget of Kaduna state and not his security vote expenditure as such,” Namdas said. 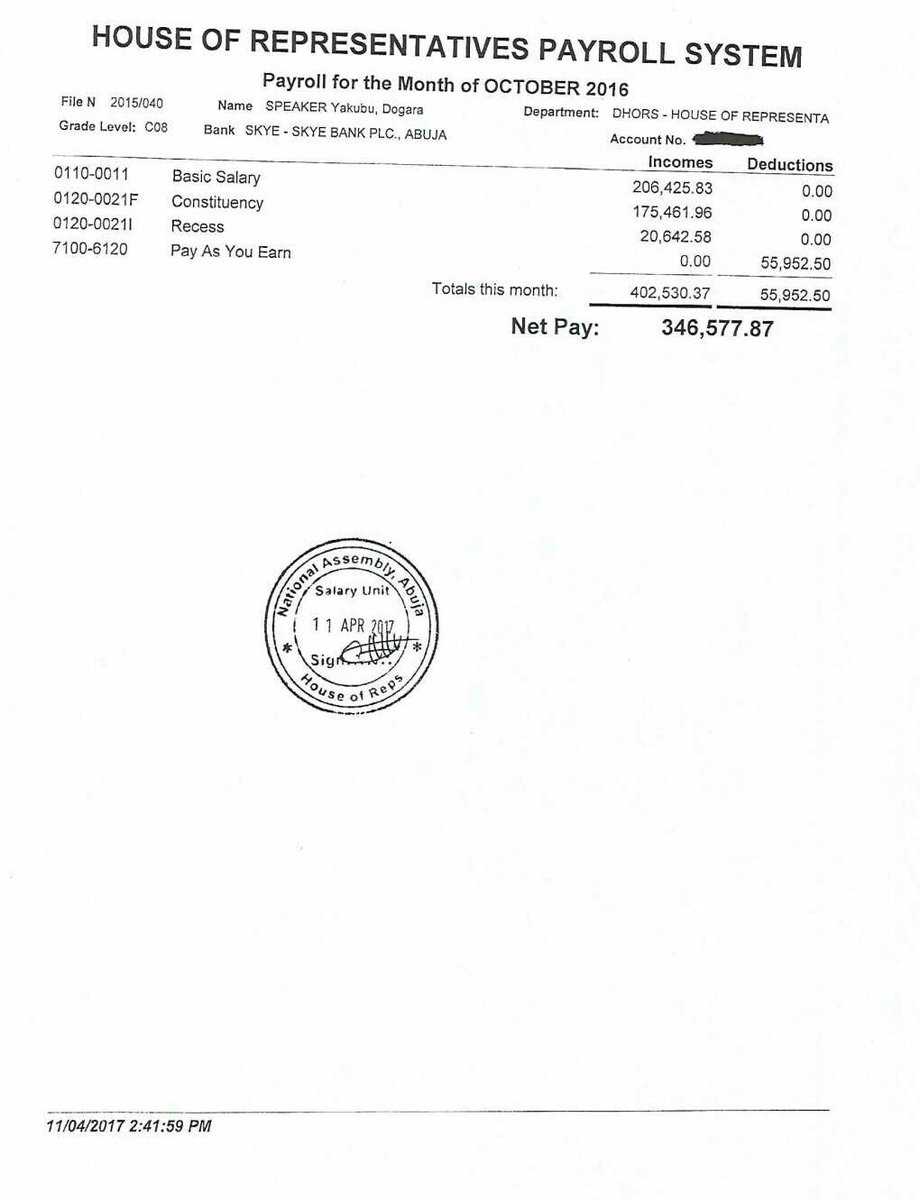 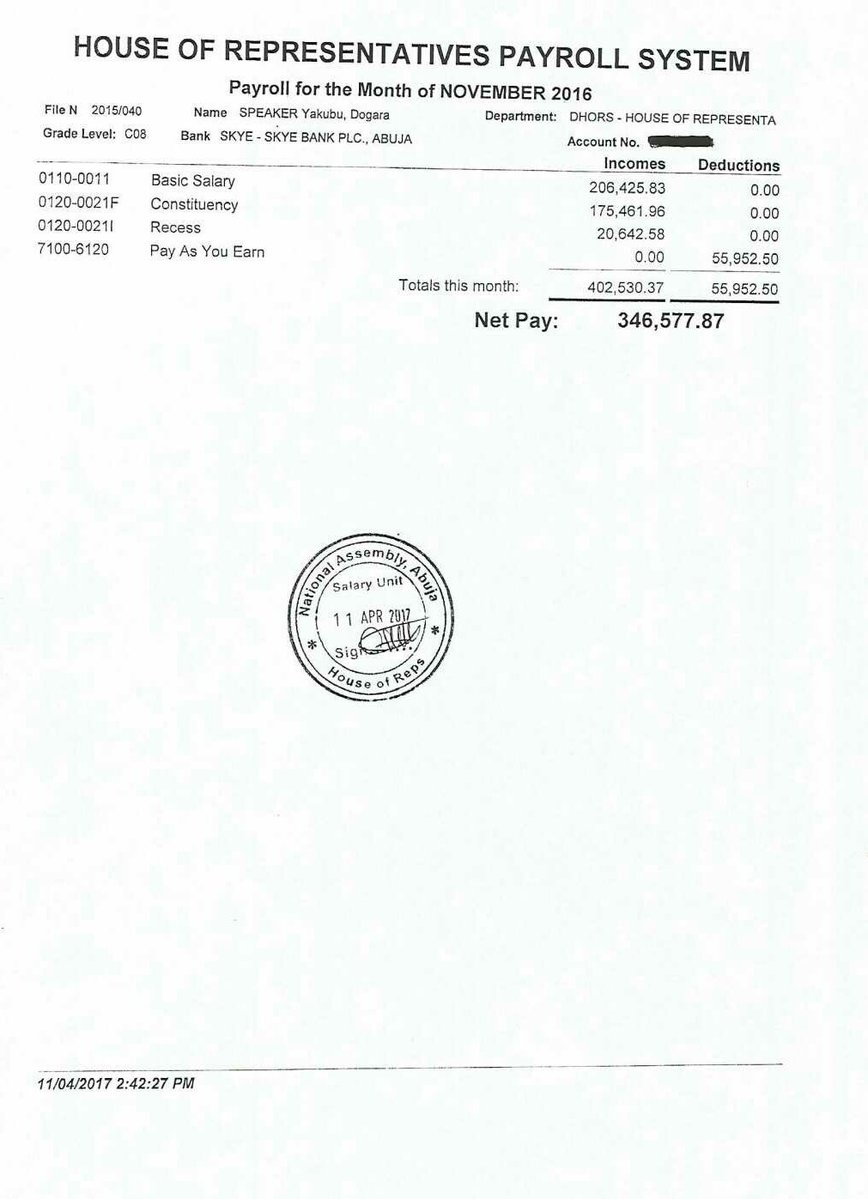 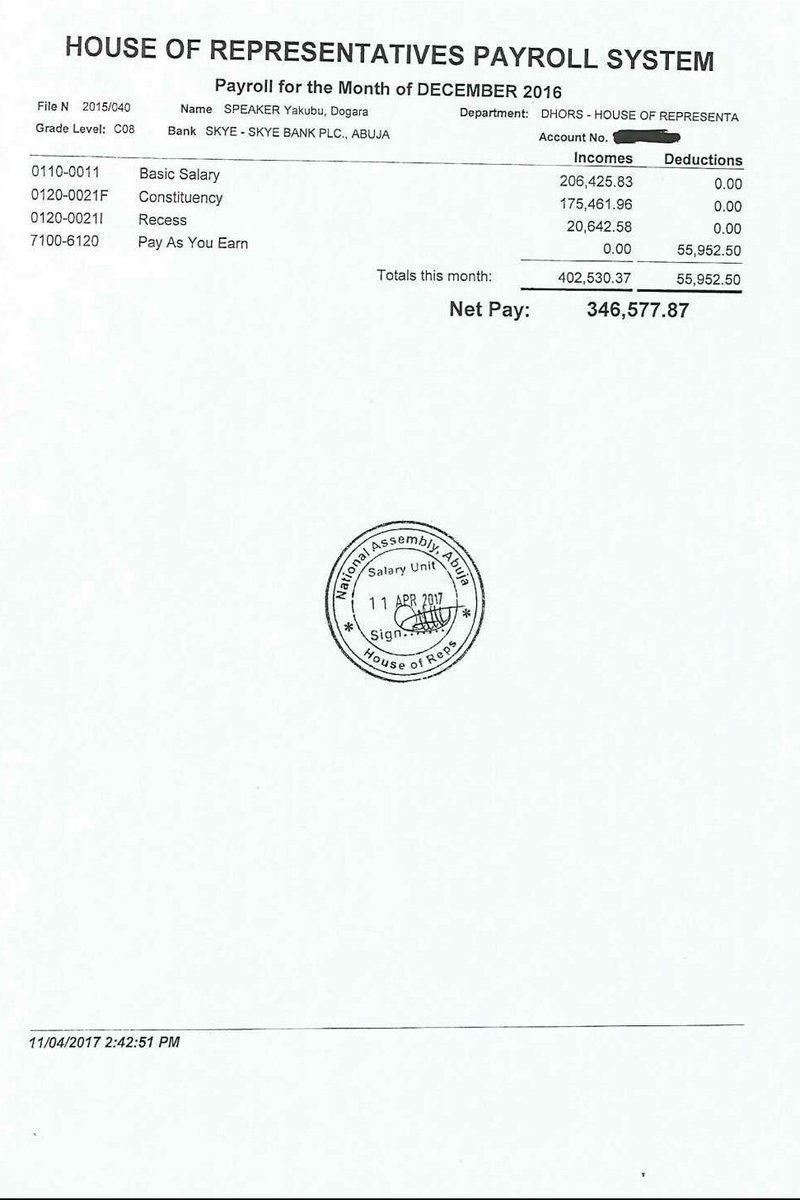 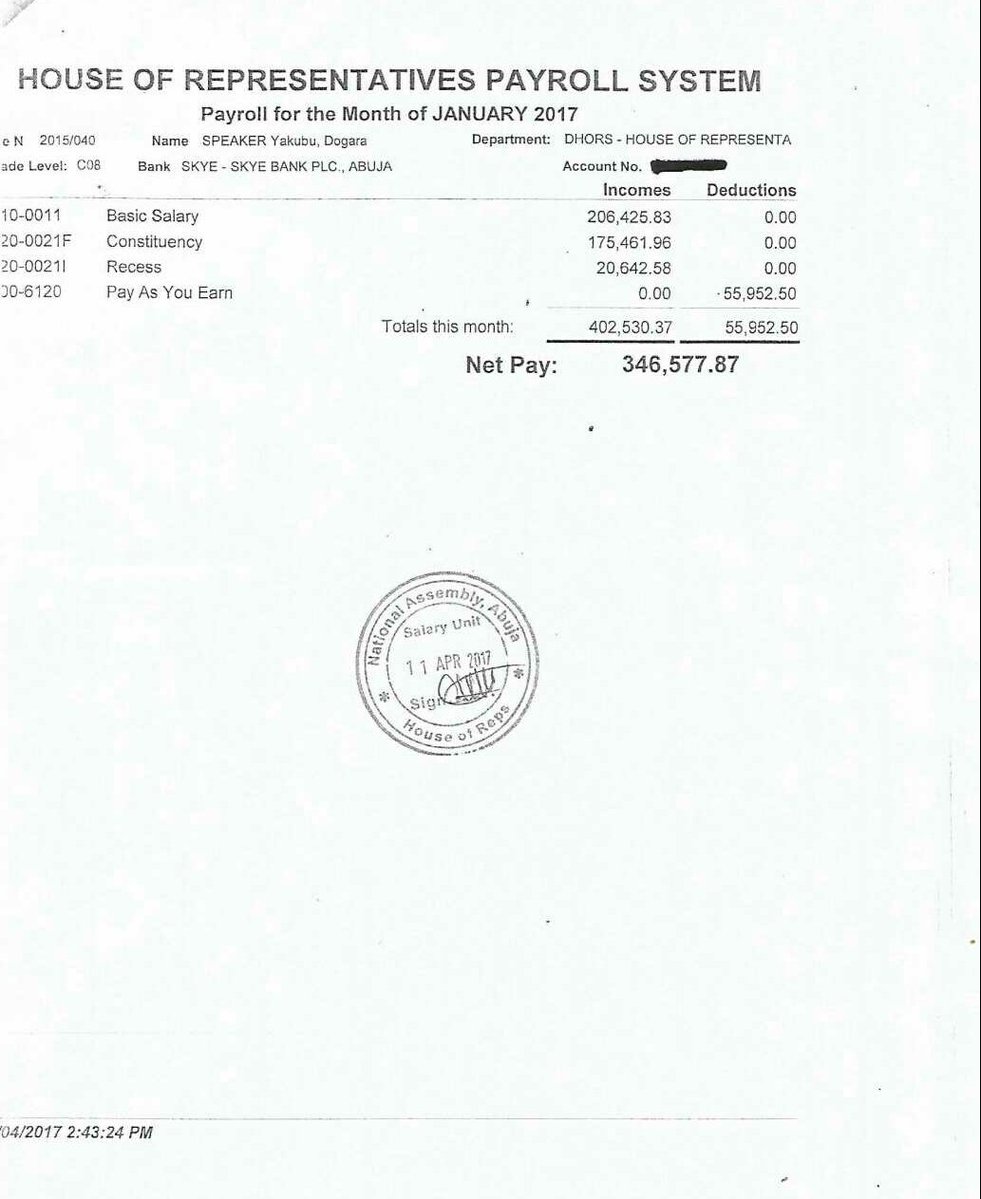 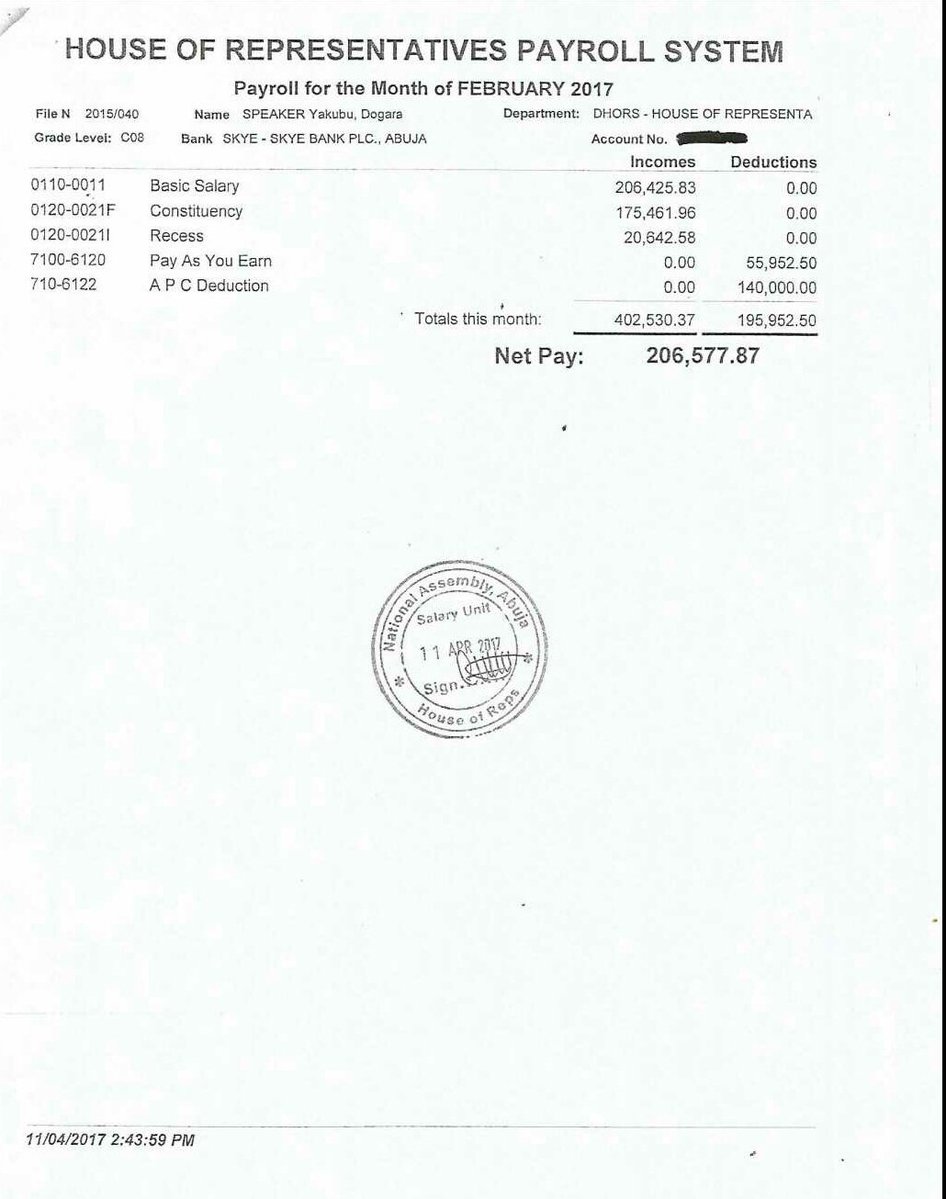 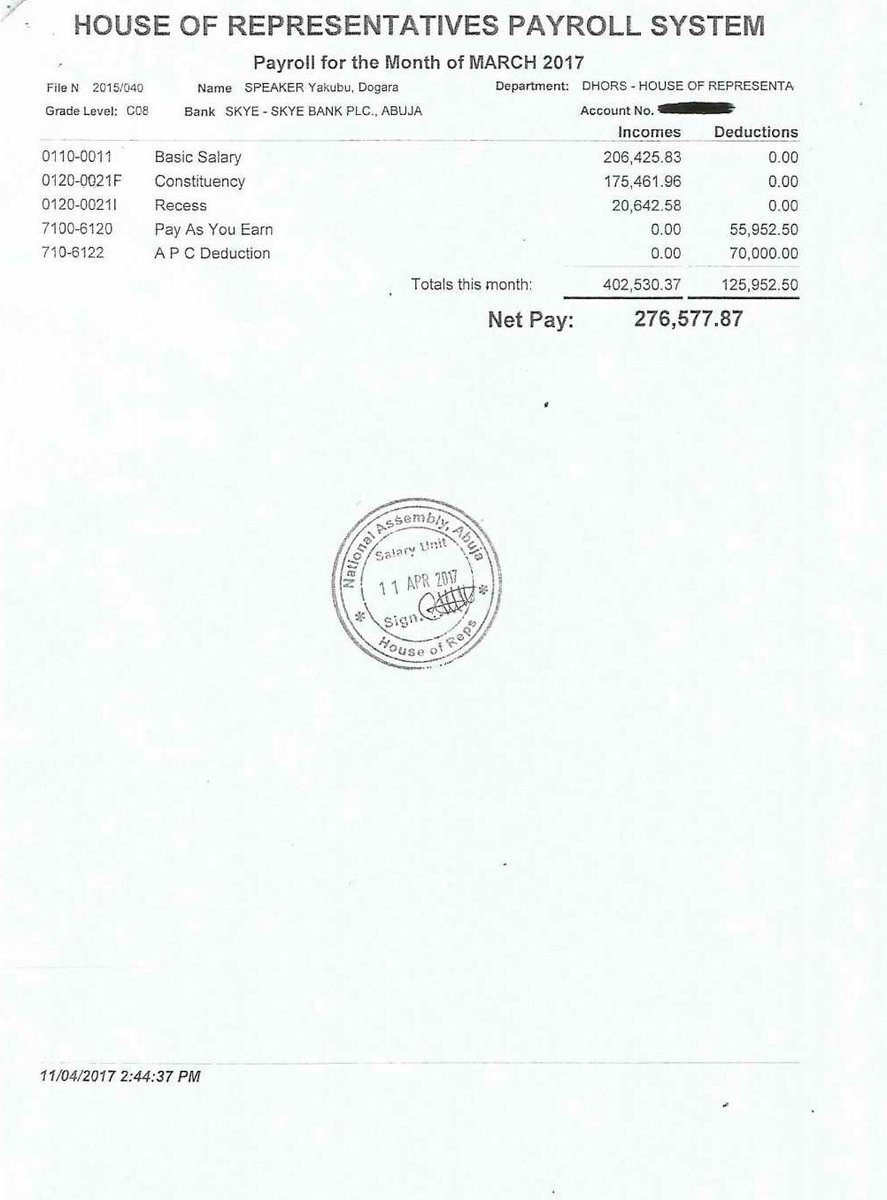 Dogara, throwing several punches and assuming the garb of a teacher earlier on Tuesday, replied El-Rufai over the budget transparency challenge thrown by the governor.

Dogara also said contrary to the assumption by Governor El-Rufai, the National Assembly budget is neither opaque nor secret.

Then he went on to lecture El-Rufai about the workings  and responsibilities of the National Assembly and why its budget is not elaborated upon in the national budget, like most government departments or parastatals.

To begin with, the speaker said, the National Assembly is not part of the executive. It is a separate arm of the government.

It was Dogara that first called out El-Rufai, challenging him in the spirit of transparency that El-Rufai preaches,  to publish his salary and security vote. And in his fresh statement, Dogara explained what he meant and how the governor overshot in his reaction.

“The Speaker requested Kaduna State Governor, El-Rufai who is known for his consistent advocacy for openness in the budget of the National Assembly, to, in the spirit of good governance, transparency and accountability to extend his campaign to other arms and tiers of government beginning from the Judiciary, to State Governments and Local Governments. The Speaker specifically urged Malam El-Rufai who has been championing this cause to impress on his colleagues (Governors) to disclose their Security votes and also publish what they do with local government funds under their jurisdictions.”

Not known to shy away from controversy or challenge, El-Rufai did and threw the ball back in the Speaker’s court. But the Speaker said Governor El-Rufai missed the point.

“The Kaduna State Governor chose to give headings of its budget on security related matters. Maybe he will give further details of actual security expenditures at the appropriate time. He claimed that the State’s accounts have been audited. No grounds have been broken here. The response by the Kaduna State Governor completely missed the point. Mr. Speaker’s call was for El-Rufai to extend the campaign for openness and transparency to other arms of government, including the Governors’ expenditures on security votes and Local Government funds. He merely doubled down on his campaign on National Assembly Budget leaving out the other aspects of Mr. Speaker’s request,” the Speaker noted, with an advice for the Governor.

“We wish to advise the Kaduna State Governor, Mallam Nasir El-Rufai to concentrate his efforts in Governing Kaduna State and stop undermining and distracting the National Assembly in playing its constitutionally assigned role in nation building. He launched an attack on the National Assembly on Friday, 7th April, 2017 and continued on Monday 10th April 2017. We are aware that there are serious security issues he should be grappling with in Southern Kaduna and other governmental issues facing him. He should not give the impression that he has no challenging work to do in Kaduna State. These attacks are coming on the heels of his now famous letter to Mr. President, Muhammadu Buhari, GCFR, where he made strenuous effort to undermine his government, by openly lampooning him when he has unhindered access to His Excellency, Mr. President. As a senior citizen, he has a responsibility not to unnecessarily overheat the polity with tendentious and unfounded outbursts.”

“The Kaduna State Governor claimed that ‘in 2016, the National Assembly budget for its 469 members was larger than the entire budget of several Nigerian States’.

El-Rufai conveniently forgot that the National Assembly has buildings to build and maintain. He discountenanced the need for training and re-training of staff and even capacity building for members. The narrative is such that he excludes the need for National Assembly members and bureaucracy to attend conferences both local and foreign. Some of the most critical work the National Assembly does is Oversight. It costs a lot of money to conduct proper oversight of executive agencies to save money and ensure governmental efficiency for the Nigerian people. Public Hearings by the National Assembly and its Committees have become a regular feature of our democracy, because citizen engagement and consultation is cardinal for running a democratic government. It costs a lot of money.