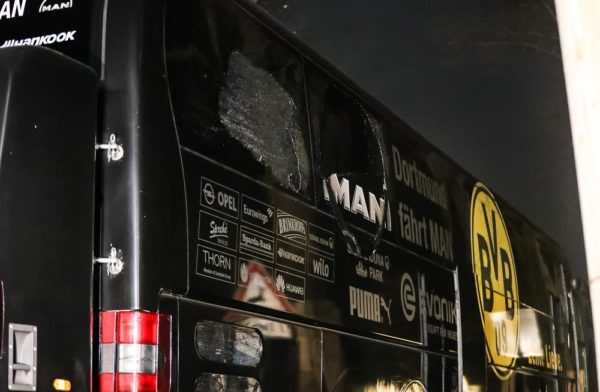 German Football club Borussia Dortmund team bus was hit by three explosive devices on their way to the club’s stadium to play a UEFA Champions League quarter-final match against Monaco. The explosion left one player, Marc Barta injured on his arm and hand.

Marc had to undergo a surgery to repair a fracture and remove the shrapnel.

The Guardian reports that the incident occurred at about 7.15pm local time in Dortmund’s Höchstem district, approximately six miles (10km) from the club’s stadium and caused the postponement of the match till Wednesday night.

A letter was found claiming responsibility for the attack at the scene but the police have refused to state its content until further investigations have been made.

Police confirmed that the explosion broke some of the vehicle’s windows. “After the initial investigation, we assume that this was an attack with serious explosives,” the Dortmund police tweeted.

However, a spokesman later told the press conference they were treating the incident as a “targeted attack on Borussia Dortmund’s team” after finding an undetonated device in the vicinity of the team hotel.

Borussia Dortmund’s chief executive, Hans-Joachim Watzke, said the coach carrying the players had only just left their hotel and turned onto the road where the explosive devices were hidden behind a hedge.

“Bartra was injured, on his hand and his arm, but nothing that would be life-threatening,” Watzke said. “The team is in complete shock. Our task is to process this experience, because the match is taking place in less than 24 hours. That’s our job.”

The players were escorted from the coach by police, who also used drones and sniffer dogs to search for further explosives.

Watzke said a crammed schedule for both teams had made it impossible to postpone the match for more than a day, a fact he described as unfortunate.

The Dortmund goalkeeper Roman Bürki told Swiss newspaper Blick: “I was sat in the back row next to Marc Bartra, who was hit by the shards of the burst back window. After the bang everyone in the bus got their heads down. We didn’t know whether there would be more. The police arrived quickly, sealed everything off. We are all in shock.” 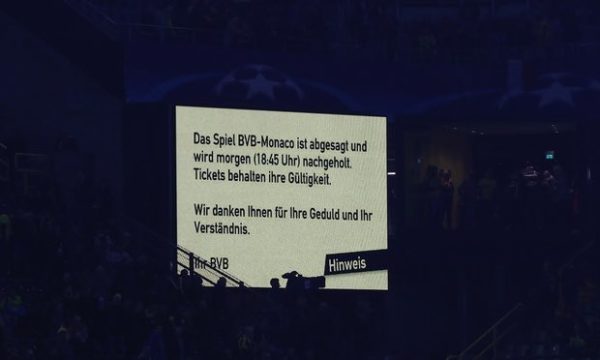 The scoreboard announces the postponement of the game prior to kick-off. Photograph: Dean Mouhtaropoulos/Bongarts/Getty Images

Police and Borussia Dortmund officials assured supporters they were not under threat inside the stadium and that they should “stay calm” while leaving.

A tweet from the German club’s account an hour before kick-off at the Westfalenstadion had first alerted news of an incident.

“At our bus departure, an incident has occurred. One person was injured. More information to follow,” it read.

After this announcement, Monaco fans at the stadium were praised for their chants of support for Dortmund after news of the attack emerged.